Raiders Upended At Home By Rebels 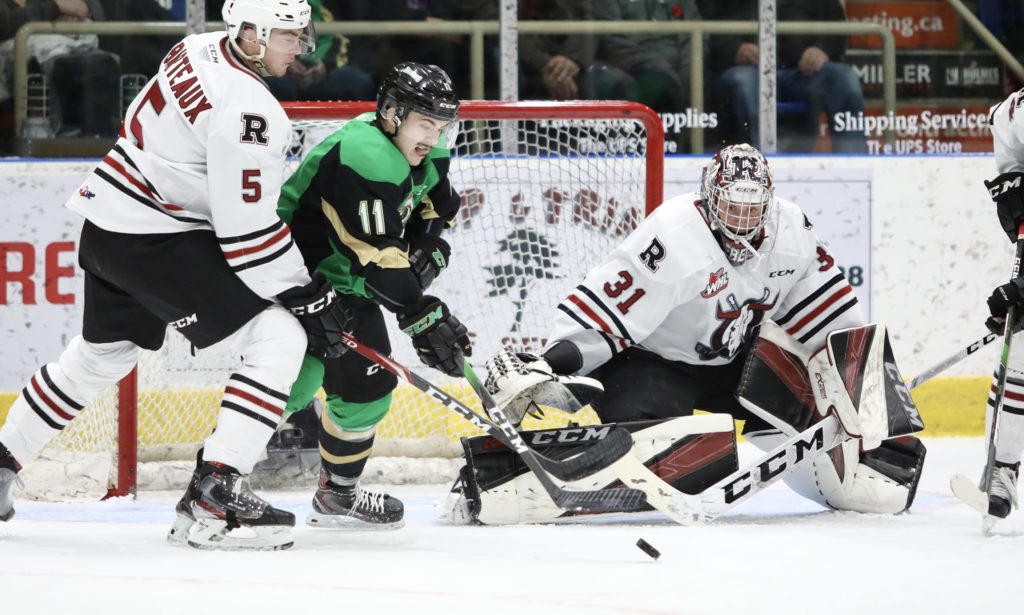 Brayden Watts led the way for the Raiders tonight with a goal and an assist. Aliaksei Protas had the Raiders’ other goal.

The loss was the Raiders’ first in regulation at home this season. They now have a 7-1-2-0 record at the Art Hauser Centre to start the season.

The Raiders got the scoring started 4:52 into the contest. Spencer Moe collected the puck in the corner and fed Watts, who was stopped by Anders. The rebound found Moe, who then centered for a cutting Protas and the Washington Capitals prospect buried his team-leading 13th goal of the year. With an assist on the play, Moe extended his point streak to seven games.

During the first, the Raiders kept the pressure on the Rebels. Ozzy Wiesblatt set up Ilya Usau in at the top of the crease, but Usau sent the deflection just wide. The Raiders outshot the Rebels 11-5 in the opening 20 minutes.

In the second, the Raiders kept up the pressure on Anders. Kaiden Guhle stripped Cameron Hausinger at the defensive blueline and was in on a breakaway on Anders, but the Rebels goaltender flashed the leather to deny the 2020 NHL Draft prospect.

The Rebels tied the game midway through the period. On an odd-man rush into the zone, Joel Sexsmith’s shot was stopped by Carter Serhyenko. The save carried the Raiders goaltender to the side of the net. Chris Douglas collected the puck in the corner and threw it to the goal. The puck went off Seryhenko and the post before just crossing the goal line, tying the game at 1-1.

That score held until the 4:22 mark of the third period. On a Rebels’ power play, Dawson Barteaux’s shot from the point got through traffic and past Serhyenko to give Red Deer the 2-1 advantage.

With 7:36 to play, the Raiders got the goal back. While shorthanded, Watts and Usau were able to generate a two-on-one rush. Watts found Usau who faked towards goal, delayed, and passed back to Watts. The overager buried the return pass for his 10th of the year to make it a 2-2 game.

On the same power play, the Rebels regained their lead. Off a faceoff to the left of Serhyenko, Jace Isley calmed down a bouncing puck just behind the Raiders goal and centered for Dallon Melin, who was alone at the top of the crease. Melin tucked the pass inside the near post to put the Rebels up 3-2.

The Raiders had chances to tie the game late with Serhyenko pulled for the extra attacker. Protas found Wiesblatt with a cross-ice pass at the side of the goal, but the 2020 NHL Draft prospect wasn’t able to get all of his shot and sent it wide.

Just before the final buzzer, Watts and Moe had a chance in front of the goal but were unable to get it past Anders and the defenders in front.

Serhyenko finished the game with 24 saves for the Raiders. Anders stopped 31 shots at the other end of the ice.

The Raiders are off until Saturday night when they head to Regina to take on the Pats at the Brandt Centre. Puck drop is 7 p.m. Catch the game at The Rock And Iron Sports Bar, or listen to Trevor Redden on 900 CKBI.

However, fans can head to the Art Hauser Centre on Thursday night for the sixth and final game of the 2019 CIBC Canada Russia Series as Team WHL takes on the Russians. Game time is 7:30 p.m. Tickets are available at the Raiders Office and online here.