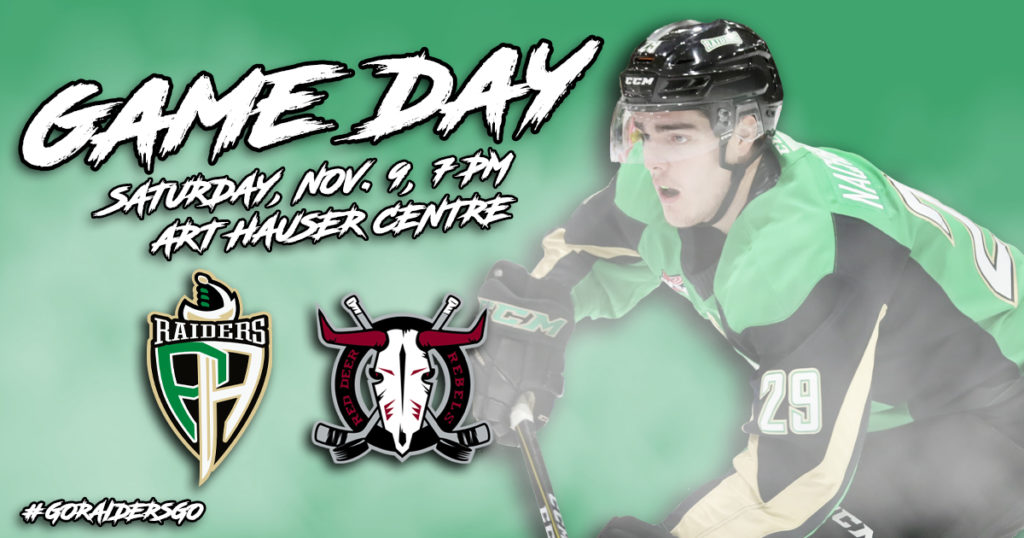 RAIDER REVIEW: The Raiders (13-3-3-0) end their busy week with a matchup against the Red Deer Rebels (5-11-0-2) at the Art Hauser Centre. Last night against Brandon, the Raiders doubled up the Wheat Kings 6-3. Twelve different Raiders recorded points in the game, led by Jakob Brook, Zack Hayes, Eric Pearce, and Ilya Usau each had two points. Boston Bilous stopped 19 shots for the win.

CAREER BEST: Zack Hayes’ first-period goal on Friday night was his third of the season, matching his career high of three established in each of the previous two seasons. The Raiders’ captain now has 11 goals in his WHL career to go along with 52 assists for 63 points.

MULTI-POINT NIGHT: Eric Pearce recorded the second multi-point night of his career on Friday night against the Wheat Kings. His other multi-point effort was just over a year ago on Oct. 27, 2018 against the Regina Pats when he also had a goal and an assist. Pearce now has three points in his last three games, which brings him to five points through 19 games this season.

HERMAN HEATING UP: With a goal on Friday night, Evan Herman recorded goals in back-to-back nights for the first time in his WHL career. The product of The Pas, MB has scored three of his four goals this season in the Raiders’ last four games.

REACHING 150: Justin Nachbaur is set to play in his 150th career WHL game in his next appearance. With an assist last night against the Wheat Kings, the Cross Lake, MB product has 30 goals and 30 assists in his 149-game career so far. Nachbaur also has an assist in his last three games.

TOPPING THE LEAGUE: Boston Bilous earned his 11th win of the year on Friday night against the Wheat Kings. The Langley, BC product leads the WHL in wins, posting one more than Portland’s Joel Hofer. Bilous’ 17 appearances are also the most in the WHL.

NEXT UP: The Art Hauser Centre will host the sixth and final game of the 2019 CIBC Canada Russia Series on Thursday night. Puck drop is 7:30 p.m. Tickets are available here and at the Raiders Office. The next Raiders’ action is on Saturday, November 16 in Regina against the Pats. The Raiders return to the Art Hauser Centre for a Sunday evening showdown with the Calgary Hitmen. Puck drop is 6 p.m. Get your tickets at the Raiders Office and online here.