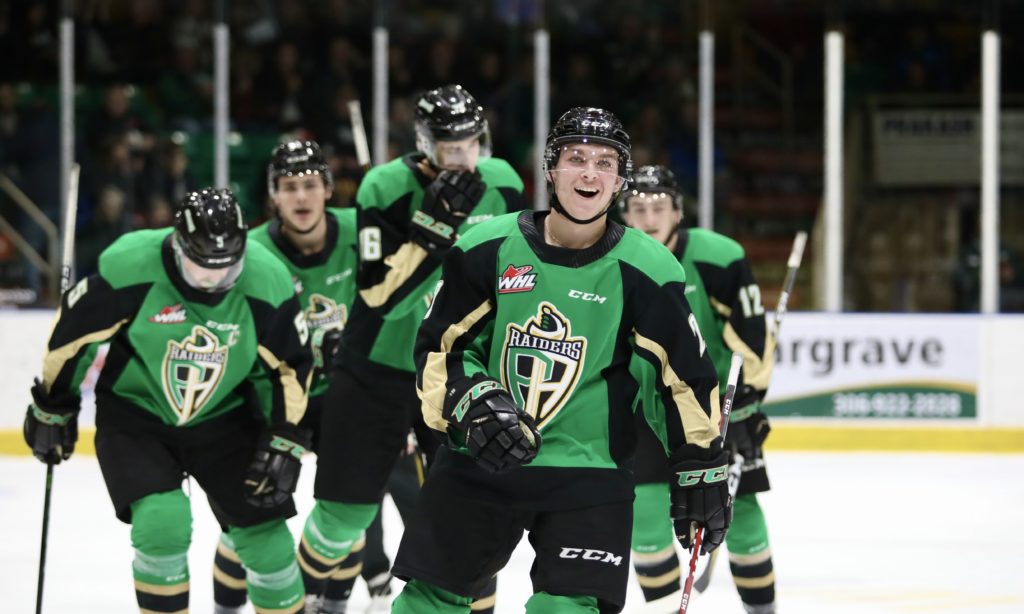 Jakob Brook, Zack Hayes, and Eric Pearce all had a goal and an assist in the contest. Ilya Usau chipped in a pair of assists in the win as well. Twelve different Raiders picked up a point on the evening.

The Raiders captain got the scoring started 8:29 into the contest. Justin Nachbaur dug the puck out from along the boards behind the net and threw it into the slot. Hayes jumped on the puck in the slot and picked the corner on Ethan Kruger for his third of the year.

Less than two minutes later, Evan Herman added to the Raiders’ lead. Herman was in front of the goal and deflected Hayes’ shot past Kruger from the inside hashmarks of the left faceoff circle for his fourth of the season.

The Wheat Kings were able to cut into the lead with 6:25 to play in the frame. On a three-on-one rush, Nolan Ritchie kept the puck and snapped it far side on Boston Bilous to make it a 2-1 game with his fifth of the season.

Just 38 seconds later, Brandon tied it. Luka Burzan got a rebound in the slot, spun, and slid a shot past Bilous’ left pad for the Colorado Avalanche prospect’s ninth of the year.

Before the end of the opening period, the Raiders regained their lead with a power-play marker. Aliaksei Protas found Spencer Moe in the corner. The Calgary product hit Brayden Watts at the left faceoff dot and the overager beat Kruger high and on the short side, which was his ninth of the season.

Thiry-one seconds after, Brook restored the Raiders’ two-goal advantage. Pearce’s shot was stopped by Kruger and sent to the end boards. The puck bounced off the boards to the crease. Brook pounced on the rebound and chipped over the goaltender’s pad for his second goal of the season.

Kruger’s night was over after the first period. He stopped four shots on eight attempts in his 20 minutes of action.

The Raiders tested Jiri Patera early in the second period, most notably a breakaway attempt by Moe that the Vegas Golden Knights prospect turned aside.

Brandon cut the lead to one at the 7:01 mark of the second with the man advantage. Burzan took a drop pass from Ben McCartney at the left faceoff circle, skated in on Bilous, and snapped the puck past the goaltender for his second of the game and 10th of the season.

In the third, the Raiders extended their lead to two again at the 6:52 mark. Brook recovered the puck in the corner and put it towards the net. Pearce chipped the puck over Patera’s glove for his second goal of the year.

The Raiders put the game away with 3:18 to play with their second power-play goal of the game. Ozzy Wiesblatt took a pass from Usau at the top of the zone, skated into a shot and snapped it past Patera for the 2020 NHL Draft eligible prospect’s seventh goal of the year.

Bilous ended the game with 19 saves for his 11th win of the year. Patera stopped 11 shots in relief for the Wheat Kings.

The Raiders are back in action on Saturday night when they host the Red Deer Rebels (5-11-0-2), who are coming off a 3-1 loss to the Saskatoon Blades on Friday. Puck drop is 7 p.m. at the Art Hauser Centre. Tickets are available at the Raiders Office and online here.