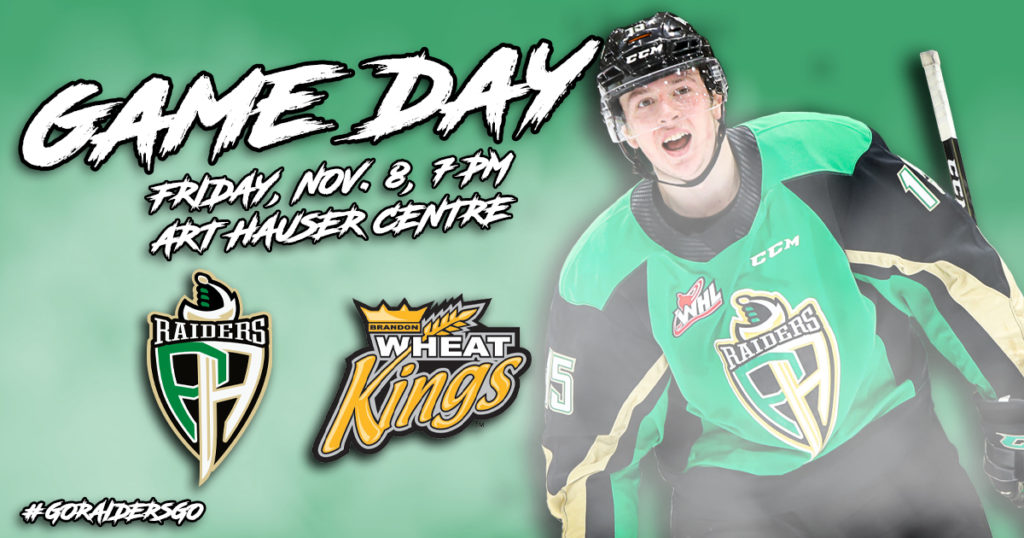 RAIDER REVIEW: The Raiders (12-3-3-0) are back at the Art Hauser Centre tonight to take on the Brandon Wheat Kings (8-10-0-0). On Wednesday, the Raiders had their winning streak snapped as they fell 4-2 to the Hitmen in Calgary at the Scotiabank Saddledome. Spencer Moe and Evan Herman had the Raiders’ goals in the game. Boston Bilous made 28 saves in the loss.

CAREER NUMBERS: Spencer Moe’s recent hot streak  has the Calgary product approaching a new career best. By scoring his eighth goal of the season in Edmonton on Wednesday, Moe is one goal shy of matching his career high in a season of nine set and matched in the previous two seasons. Moe is fourth in team scoring this season with 10 assists to go along with his eight goals.

STREAK SNAPPED: Ozzy Wiesblatt’s five-game point streak came to an end on Wednesday night in Calgary. Over that span, he had three goals and six assists. It was the 2020 NHL Draft eligible prospect’s second five-game streak of the season and third of his career.

ON THE POWER PLAY: Evan Herman scored the first goal of his WHL career on the power play on Wednesday night in Calgary.  It helped the Raiders extend their streak of consecutive games with a power-play goal to four.

SAM’S LIST: Kaiden Guhle was ranked 31st for the 2020 NHL Draft in Sportsnet’s Sam Cosentino’s November rankings.  Guhle, who has four assists in the past four games, was given an “A” rating by NHL Central Scouting, which indicates a potential first round  pick in June’s draft.

NEXT UP: The Raiders are back at home tomorrow night as the Red Deer Rebels come to town. Puck drop is 7 p.m. Tickets are available at the Raiders Office and online here.