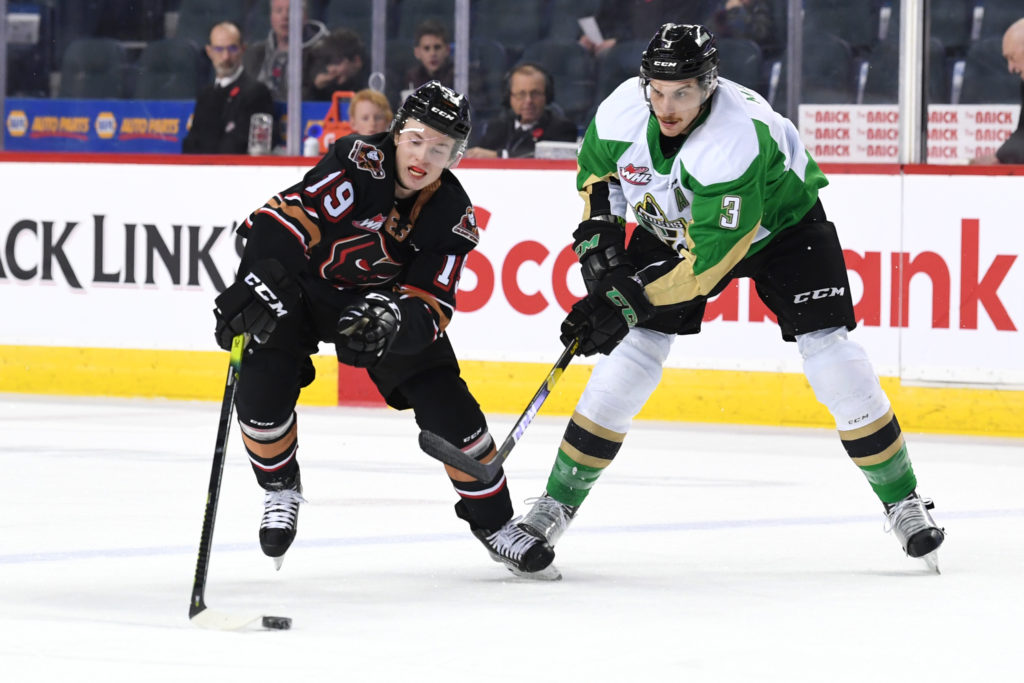 Calgary, AB – The Prince Albert Raiders (12-3-3-0) had their five-game winning streak snapped on Wednesday night, falling 4-2 to the Calgary Hitmen (9-5-1-0) at the Scotiabank Saddledome.

Spencer Moe and Evan Herman had the Raiders’ goals on the evening. Orca Wiesblatt had two goals in the win for the Hitmen.

Calgary opened the scoring 2:42 into the contest. Luke Prokop’s shot from the point was tipped in front by Jonas Peterek, redirecting the puck past Boston Bilous for Peterek’s fourth goal of the year.

Shortly after the media timeout, the Raiders tied it up. Landon Kosior got the play started when his point shot hit the post. Zack Hayes kept the puck in at the other point and put in the corner for Moe. The Calgary product stepped out of the corner, made an extra move to the slot, and beat Justin Peters with his shot to make it 1-1. It was Moe’s eighth goal of the year, extending his point streak to five games.

Before the end of the frame, the Raiders were inches away from taking the lead. On a three-on-one rush, the puck ended up on the stick of Ozzy Wiesblatt. His attempt on goal beat Peters, but hit the post and cleared the crease.

The Raiders got the only goal of the second period on a power play at the 7:03 mark. Herman hit Justin Nachbaur with a pass at the blueline by the boards. Nachbaur returned the pass to a streaking Herman who snapped his shot past Peters to make it 2-1. It was Herman’s third goal of the year.

Nice give and go between the #Manitobros Justin Nachbaur and Evan Herman, and it’s Herman scoring his 3rd of the year. 2-1 they lead, 7:03 into the second period. https://t.co/wfk9BAsq9b pic.twitter.com/wTrQ2NSeFX

The Hitmen drew even 5:08 into the third period. A turnover at the Raiders’ offensive blueline sprung Orca Wiesblatt on a breakaway. The Hitmen’s forward made a quick move to his forehand and beat Bilous for his fifth of the season.

The score held until late in the third period. After the Raiders were held off the board on a power play, the Hitmen took the lead. Josh Prokop’s shot was stopped by Bilous, but the rebound found the stuck of Orca Wiesblatt. He potted the rebound to give Calgary a 3-2 lead with 1:22 remaining.

With the Raiders’ net empty, Egor Zamula hit the open cage from his own end to wrap up the scoring at 4-2 with 27 seconds to play.

Bilous finished with 28 saves in the loss for the Raiders. Peters stopped 26 Raiders attempts on goal, including quality chances late in the second period to keep it a one-goal game.

The Raiders return to the Art Hauser Centre on Friday night when they take on the Brandon Wheat Kings (8-10-0-0). Puck drop is 7 p.m. Tickets are available at the Raiders Office and online here.