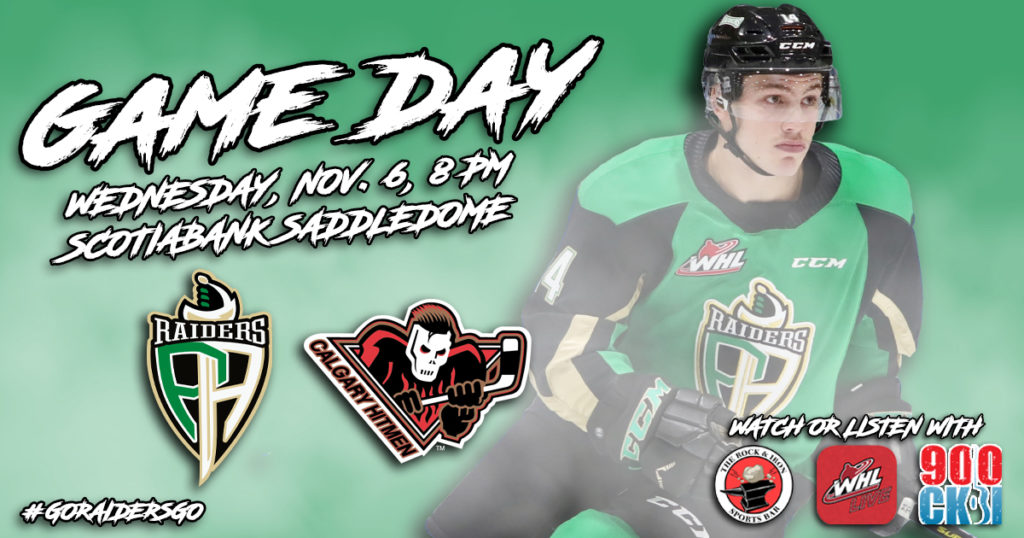 RAIDER REVIEW: The Raiders (12-2-3-0) close out their mid-week trip to Alberta in Calgary tonight against the Hitmen (8-5-1-0). Last night in Edmonton, the Raiders doubled up the Oil Kings 6-3. Spencer Moe and Ozzy Wiesblatt each had two goals and an assist. Brayden Watts had a goal and three assists. Aliaksei Protas chipped in a pair of assists. Boston Bilous stopped 17 shots for the win.

GIVE ME SOME MOE: Calgary product Spencer Moe is riding a four-game point streak, which is tied for the longest of his career. Moe previously had a four-game streak to start the 2018-19 season with an assist in each contest. During his current run, Moe has five goals and four assists to bring his total on the year to seven goals and 10 assists.

HIGH WATTAGE: With a goal and three assists on Tuesday night, Brayden Watts recorded the first four-point night of his WHL career. The overager is on his second five-game point streak of the season. During this streak, Watts has three goals and 10 assists. The Bakersfield, CA product is third in team scoring with 21 points (eight goals, 13 assists).

HELPING OUT: Captain Zack Hayes recorded the 50th assist of his WHL career on Brayden Watts’ first period goal on Tuesday.  Along with 10 goals, the Calgary product has 60 points in his WHL career. Tuesday also marked Hayes’ 225th career game.

FROM THE BLUELINE: Defenceman Landon Kosior has recorded points in back-to-back games for the first time in his WHL career with assists in the last two games. He also has three points in the past four games to bring his total to five points on the year.

AT THE WORLDS: Nolan Allan and Canada Red wrapped up the preliminary round at the 2019 World Under-17 Hockey Challenge with a 2-1 record to finish second in Group B. Canada Red battles Canada White in the quarter-finals on Thursday.

NEXT UP: The Raiders are back in Prince Albert on Friday night to open up a two-game weekend homestand as they welcome the Brandon Wheat Kings (8-10-0-0) visit the Art Hauser Centre. On Saturday, the Raiders host the Red Deer Rebels (5-9-0-2). Both games begin at 7 p.m. Tickets are available at the Raiders Office and online here.