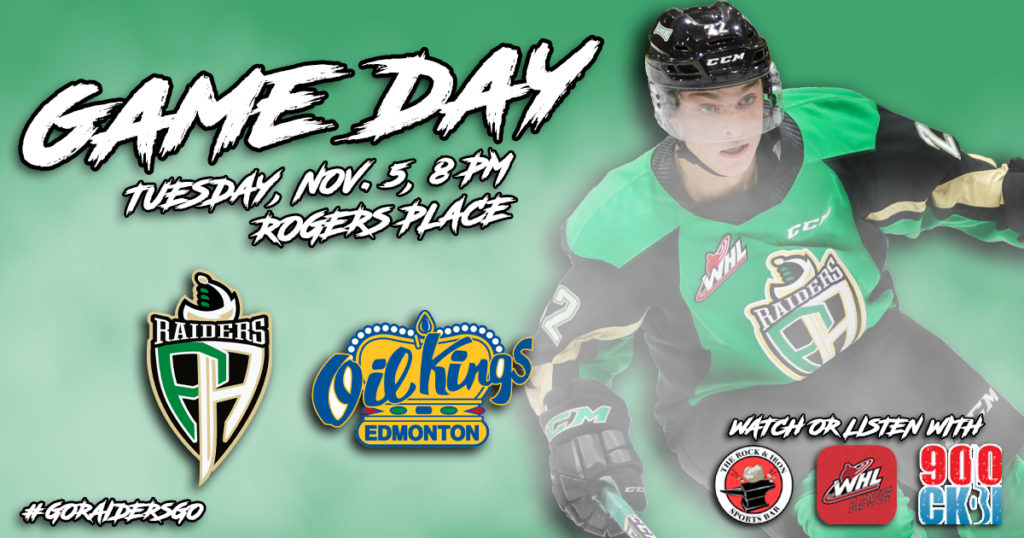 RAIDER REVIEW: The Raiders (11-2-3-0) head to Edmonton to face off with the Oil Kings (12-1-3-0) at Rogers Place in the first meeting between the two teams since last year’s Eastern Conference Championship. On Saturday, the Raiders knocked off the Warriors 5-1 in Moose Jaw. Aliaksei Protas had two goals and two assists in the win. Carter Serhyenko earned his second career win with 32 saves.

TOP OF THE TABLE: Aliaksei Protas’ four-point night on Saturday put him at the top of the WHL scoring race with 26 points. It was also the first four-point night for the Capitals prospect. Now with 12 goals on the season, the Belarusian import has surpassed his goal total from his rookie season last year. Protas is currently riding a five-game point streak with six goals and five assists in that span.

CLINCHER: Another WHL category that Aliaksei Protas leads is game-winning goals. The centreman has four game winners this season.

SET-UP MAN: With two assists on Saturday, Ozzy Wiesblatt moved to fifth in the WHL in assists with 15 this season. The 2020 NHL Draft eligible player has three games with two or more assists this season and five in his WHL career.

BACK TO BACK: The Raiders power play is starting to heat up. With a power-play goal on Saturday, the Raiders recorded goals in back-to-back games with the man advantage for the second time this season.

WORLD U-17 UPDATE: Nolan Allan and Canada Red fell 4-2 to Sweden on Monday night in Swift Current to make their record 1-1. Canada Red wraps up the group stage tonight against Finland. Game time is 7 p.m.

NEXT UP: The Raiders head to Calgary tomorrow night to tangle with the Hitmen (8-5-1-0). Game time is 8 p.m. The next Raiders’ home game is Friday night when the Brandon Wheat Kings (7-10-0-0) visit the Art Hauser Centre. Puck drop is 7 p.m. Tickets are available at the Raiders Office and online here.