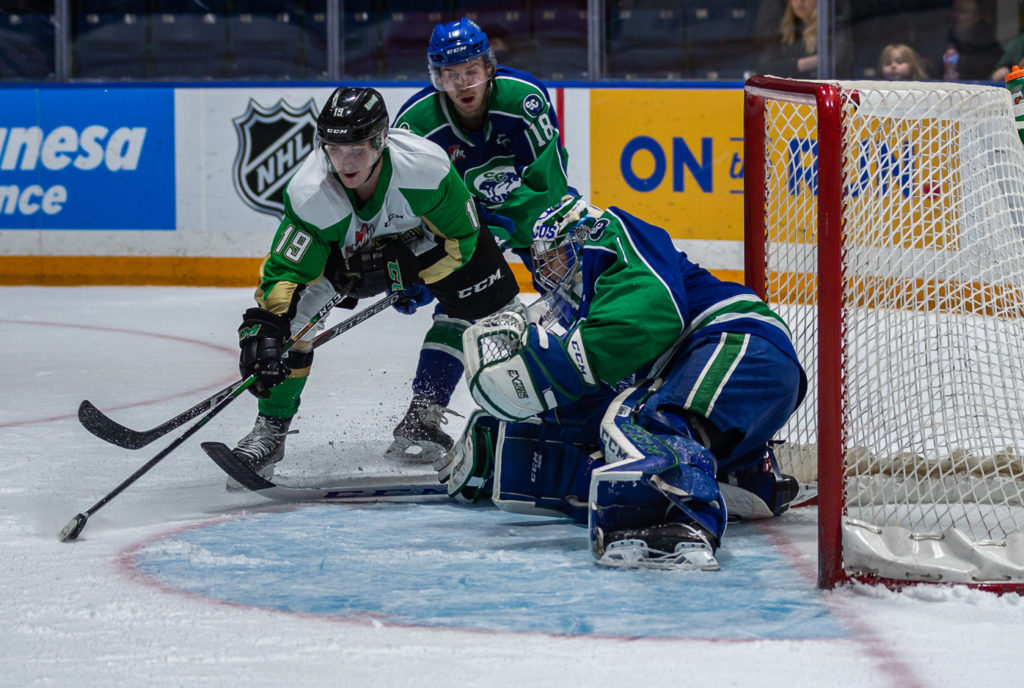 Swift Current, SK – Aliaksei Protas, Ilya Usau, and Ozzy Wiesblatt all had multi-point efforts as the Prince Albert Raiders (18-5-3-1) skated to a 4-1 win over the Swift Current Broncos (6-15-1-2) at the Innovation Credit Union i-plex on Saturday night.

The win completed a sweep of the weekend home-and-home series against the Broncos. Wiesblatt had a pair of goals for the Raiders, while Protas and Usau both had two assists.

Protas also kept his point streak alive, running it to nine games. Spencer Moe also extended his streak to six games with an assist in the win.

After peppering the Broncos with shots for the first half of the period, the Raiders got the scoring started with 8:14 to play in the frame. Reece Vitelli cut into the centre of the Broncos’ zone with Daniil Stepanov driving to the front of the net. Vitelli’s shot beat Poulter high on the glove side to give the Raiders the lead.

The goal was originally credited to Vitelli. Later in the game, the goal was changed to Stepanov who got a stick on the shot in front of Poulter for the Belarusian’s third goal of the year.

Scoring update: Our first goal has now been credited to Daniil Stepanov https://t.co/DObqcJpjId

Late in the frame, the Raiders doubled up their lead. Protas had the puck on the left wing and put a shot on goal from the faceoff circle. The puck bounced off a Broncos defender and then off Brayden Watts before crossing the goal line for the overager’s 14th of the season with 18 seconds left in the period.

SCORES! @protas_21 takes a shot that goes off a Broncos defender and then @brayden_watts29!

The Broncos got one back 3:46 into the middle frame. On a two-on-one rush into the Raiders’ end, Sergei Alkhimov kept and snapped a shot past Carter Serhyenko to make it a 2-1 game. It was also the Broncos’ Teddy Bear Toss goal, delaying the game.

A great play from Usau and Wiesblatt restored the Raiders’ two-goal lead at the 10:01 mark of the middle frame. Usau picked the pocket of a Broncos defenceman as he was turning to leave the zone. He held the puck and saucered a pass to Wiesblatt who one-timed it past a sprawling Poulter for the 2020 NHL Draft prospect’s 11th goal of the year.

SCORES! Great pass from Ilya Usau sets up @ozzywiesblatt with the one timer!

The Raiders had chances to extend their lead before the end of the middle frame. Vitelli had a shot that got through Poulter that trickled wide of the goal. Stepanov found the rebound, but put it off the post. Right before the end of the period, Wiesblatt cut to the goal from the corner, dragged it around Poulter, but was unable to stuff it past Poulter’s pad.

Midway through the third, the Raiders made it a 4-1 game. Protas carried the puck around Matthew Benson and put a pass across the goal mouth for Wiesblatt who tapped in the pass for his second of the night and 12th of the season.

SCORES! Aliaksei Protas gets around Benson and then finds @ozzywiesblatt with a backdoor tap in.

The Raiders kept up the pressure throughout the period, outshooting the Broncos 12-2 in the final frame.

It was another good game for Serhyenko as the rookie netminder stopped 18 shots in the win. Poulter made 40 saves in the loss for the Broncos.

The Raiders return to the Art Hauser Centre on Friday night when the Kelowna Rockets, host of the 2020 Memorial Cup Presented By Kia, visit Prince Albert. Puck drop is 7 p.m. Tickets are available at the Raiders Office and online here.

Also, the Raiders’ auction for Ugly Christmas Sweater Night Presented By Lakeland Ford is now underway. Bid on or outright buy a jersey at 32auctions.com/UglyChristmasSweaters. The Raiders will wear the jerseys on Friday, December 13 against the Winnipeg ICE. Pick up tickets at the Raiders Office and online here.