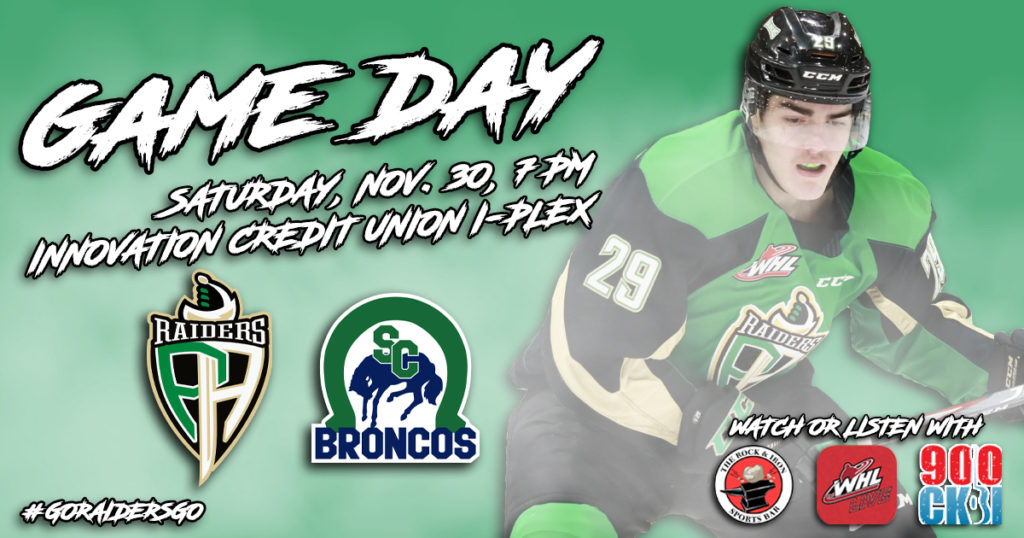 RAIDER REVIEW: The Raiders (17-5-3-1) head to Swift Current tonight for the second leg of their home-and-home series with the Broncos (6-14-2-1). Last night in Prince Albert, the Raiders scored three times in the third to take down the Broncos. Aliaksei Protas had a goal and two assists to the pace the offence. Spencer Moe, Cole Nagy, and Brayden Watts also scored for the Raiders.

PROTAS’ POINTS: With three points in Friday night’s win over the Broncos, Aliaksei Protas reached 40 points on the season. That tied his offensive output during his rookie season when the Vitebsk, Belarus product had 11 goals and 29 assists. The Washington Capitals is tied for first in the WHL scoring race with 18 goals and 22 assists on the season. His 40 points on the year are equal to the Lethbridge Hurricanes’ Dylan Cozens. Also, with two assists on the evening, Protas surpassed 50 assists for his WHL career. He also took over the WHL lead in game-winning goals as he scored his fifth decisive marker of the season in the third period on Friday.

HITTING 30: Brayden Watts picked up a goal and an assist on Friday night, bringing the overager to 30 points (13 goals, 17 assists) on the season. The Bakersfield, CA product has now reached the 30-point plateau for the third consecutive season. He is nine points off his career high of 39 points in 70 games during the 2017-18 season with the Giants.

FINDING TWINE: Cole Nagy scored his first goal in 14 games when the opened the scoring on Friday night. The Saskatoon product last scored on Sept. 27 against the Regina Pats. The rookie has a pair of goals and an assist in 18 games this season.

NEXT UP: The Raiders welcome the 2020 Memorial Cup Presented By Kia host Kelowna Rockets to the Art Hauser Centre on Friday. Puck drop is 7 p.m. Tickets are available at the Raiders Office and online here.