Raiders Score Three In Third To Down Broncos 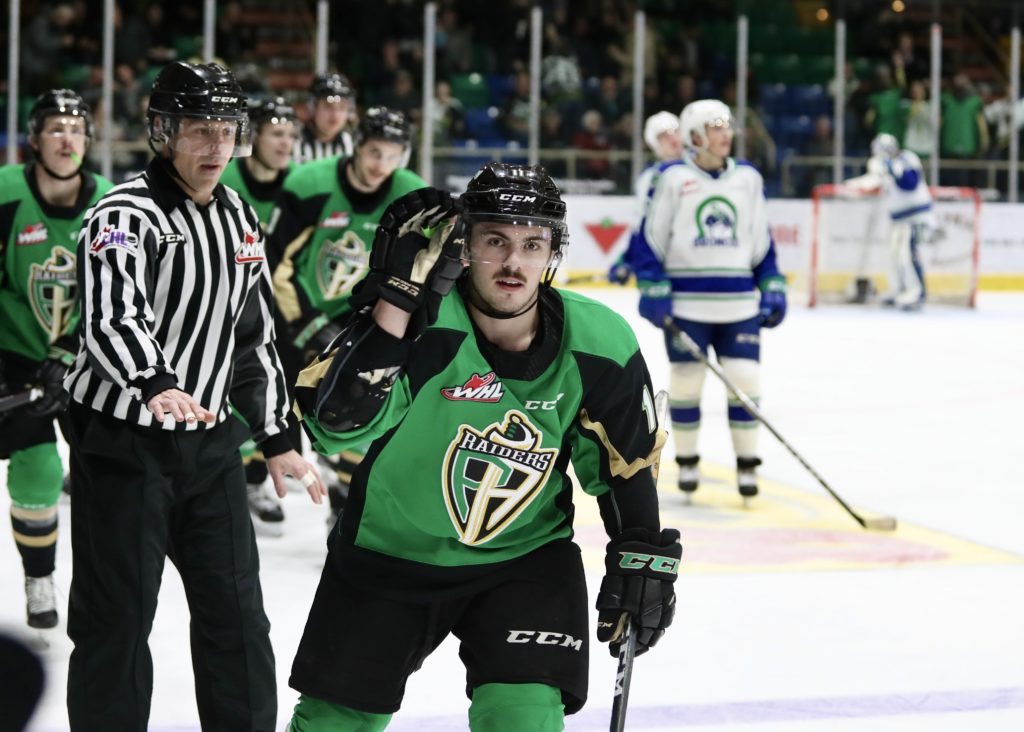 Brayden Watts had a goal and an assist in the contest. Cole Nagy and Spencer Moe also scored in the win for the Raiders.

The Raiders had some quality chances to open the scoring in the first period. Moe beat his man to the outside off the rush, cut the goal, and put a backhander on net that was turned aside by Isaac Poulter. Later, Ilya Usau made a backhand saucer pass across the ice to Justin Nachbaur, but the one-timer was stopped by the Broncos netminder.

Cole Nagy finally solved Poulter for the Raiders at the 3:05 mark of the second period. Protas carried the puck around the back of the net and centered a pass that found Nagy’s tape. The Saskatoon product one-timed the puck through Poulter for his second of the year, giving the Raiders a 1-0 lead.

Before the end of the second, the Broncos tied it up. Jaxan Kaluski put a puck on net that got through traffic. Before it reached the goal, Raphael Pelletier redirected the shot Boston Bilous for his first career WHL goal to make it a 1-1 game after 40 minutes.

Protas broke the tie at the 6:33 mark of the third period on the power play. The Washington Capitals prospect got the puck at the left faceoff circle and put his shot off Poulter’s right elbow and into the back of the net for his 18th goal of the season, putting his team up 2-1.

Less than three minutes later, Moe gave the Raiders a two-goal lead with a fantastic individual effort. He toe dragged the puck around a defender, corralled it at the side of the goal, and lifted a backhander under the cross bar for his 11th goal of the year.

The Raiders iced it with an empty-net goal with 21 seconds to go. Watts sent it over to Protas, who gave it back to the overager from Bakersfield, CA for his 13th of the year, wrapping up the scoring at 4-1.

Bilous finished the game with 21 saves while picking up his 15th win of the year. Poulter made 33 saves in the loss for the Broncos.

The Raiders take on the Broncos again on Saturday night in Swift Current. Puck drop is 7 p.m. Head to The Rock And Iron Sports Bar to watch the game, or listen on 900 CKBI with Trevor Redden.

The next Raiders’ home game is on Friday, December 6 when the Kelowna Rockets, hosts of the 2020 Memorial Cup Presented By Kia, make their only trip of the season to the Art Hauser Centre. Game time is 7 p.m. Tickets are available at the Raiders Office and online here.

Also, the Raiders’ auction for Ugly Christmas Sweater Night Presented By Lakeland Ford is now underway. Bid on or outright buy a jersey at 32auctions.com/UglyChristmasSweaters. The Raiders will wear the jerseys on Friday, December 13 against the Winnipeg ICE. Pick up tickets at the Raiders Office and online here.