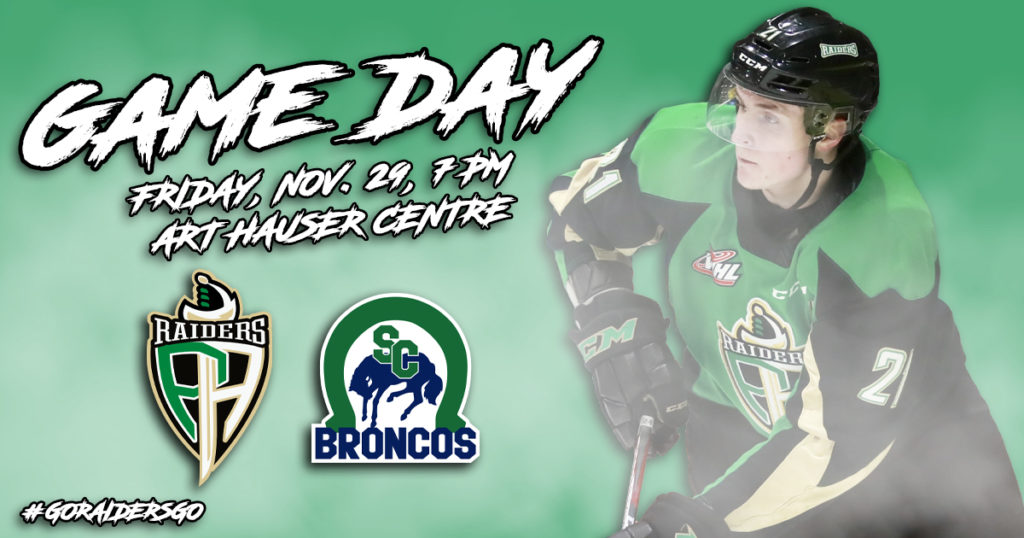 RAIDER REVIEW: The Raiders  (16-5-3-1) open a home-and-home series with the Swift Current Broncos (6-13-2-1) tonight at the Art Hauser Centre. On Saturday, the Raiders had their three-game winning streak snapped with a 4-2 loss to the Tigers in Medicine Hat. Remy Aquilon and Spencer Moe scored for the Raiders. Carter Serhyenko made 27 saves in relief for his third loss of the season.

CRAIG’S LIST: Kaiden Guhle and Ozzy Wiesblatt found themselves on TSN Director of Scouting Craig Button’s list for the 2020 NHL Draft. The pair of prospects were ranked 21st and 35th overall, respectively, on Button’s 62-player list.

ON THE BOARD: Remy Aquilon scored the first goal of his WHL career on Saturday night in Medicine Hat. The Kelowna, BC product now has a goal and six assists in his 82-game WHL career.

NEW HIGH: Spencer Moe set a new career high for goals in a season when he scored on Saturday night in Medicine Hat. Moe now has 10 goals this season, surpassing his previous high of nine set twice before. The Calgary product is fourth in team scoring with 26 points this year.

IN THE MIX: The Raiders stayed in the Kia CHL Top 10 ranking this week, coming at sixth in the country. They are joined by the Everett Silvertips (4) and Portland Winterhawks (9) on the weekly rankings.

NATIONAL NEWS: Aliakesi Protas and Ilya Usau were invited to Belarus’ camp for the 2020 World Under-20 Championship Division 1A tournament coming up in December. The winner of this event will be promoted to the Top Division which will compete at the 2021 World Juniors in Edmonton and Red Deer. Protas leads the Raiders in scoring with 37 points. Usau is fifth in team scoring and fourth in the league among rookies with 19 points.

NEXT UP: The Raiders close out the home-and-home series with the Broncos tomorrow night in Swift Current. Game time is 7 p.m. The next Raiders’ home game is next Friday against the Kelowna Rockets. Puck drop is 7 p.m.