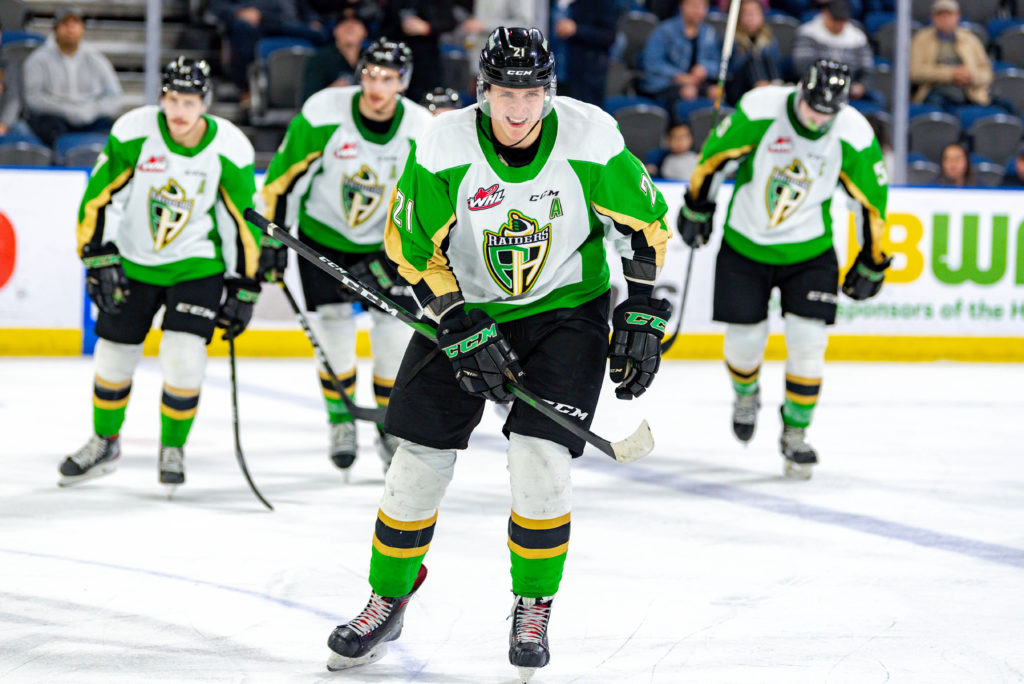 Prince Albert, SK – The Prince Albert Raiders eye a home-and-home series this weekend as they return from a week-long trip to Alberta.

Last week, the Raiders finished with a 2-1-0-0 record in their three-game trip through the Central Division. The week started with a 7-1 win over the Rebels in Red Deer on Wednesday night. Evan Herman paced the team with a goal and two assists in the win.

On the weekend, the Raiders picked up a 5-3 win over the Hurricanes in Lethbridge on Friday. Aliaksei Protas had a pair of goals, while Reece Vitelli chipped in two assists.

The week concluded with a 4-2 loss to the Tigers in Medicine Hat on Saturday. Remy Aquilon scored the first goal of his WHL career in the loss, while Spencer Moe set a new career high with his 10th goal of the year.

SCORES! @r_aquilon nets his first career WHL goal with a shot from the point!

This week, the Raiders take on the Swift Current Broncos (5-13-2-1) in a home-and-home series. On Friday night, the teams square off at the Art Hauser Centre. Puck drop is 7 p.m. Tickets are available at the Raiders Office and online here.

On Saturday, the Raiders head to Swift Current to close out the home-and-home series. Game time at the Innovation Credit Union i-plex is 7 p.m. Catch the game at The Rock And Iron Sports Bar, or listen to Trevor Redden on 900 CKBI.

The auction for the jerseys worn on the upcoming Ugly Christmas Sweater Night Presented By Lakeland Ford is still on-going. Nine jerseys have been purchased so far. Jerseys can be bought outright for $450 or bidding starts at $250. The online portion of the auction ends on Thursday, December 12 at 5 p.m. CST. From there, jerseys that have not been bought outright will continue as a silent auction at the game on December 13. Check out the auction here. Tickets for the game can be found here.

The Raiders are also hosting the Wawanesa Toy Drive in support of the Optimist Club of Prince Albert on Wednesday, December 11 when the Medicine Hat Tigers come to the Art Hauser Centre. The toys will benefit the Optimist Club’s Santa Anonymous program. Fans are asked to bring a new and unwrapped toy to the game with a chance to win tickets to the 2020 Memorial Cup Presented By Kia in Kelowna this May. Get all of the details here. Tickets can be purchased here.

And don’t forget about our Teddy Bear Toss Presented By Canadian Tire on December 14 against the Kamloops Blazers. Please bring your stuff animals wrapped in a plastic bag. Tickets for Teddy Bear Toss Night are available here.