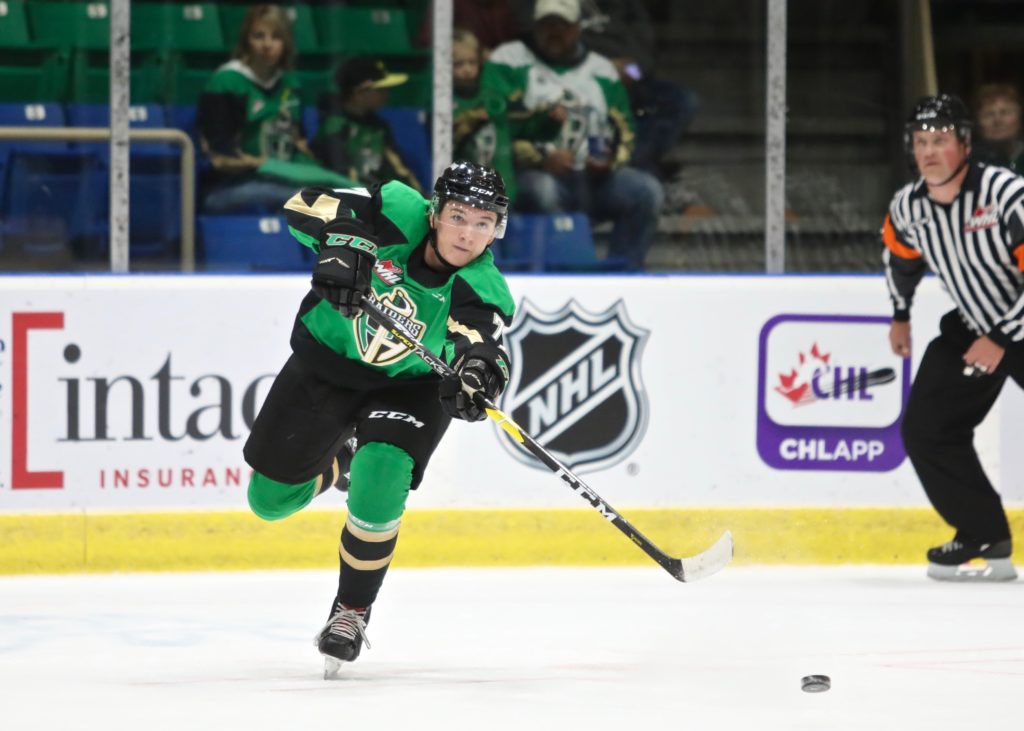 The loss snapped the Raiders’ three-game winning streak. Remy Aquilon and Spencer Moe found the back of the net for the Raiders in the loss.

The Tigers struck first at the 6:06 mark of the opening period. After playing a puck behind the net, Boston Bilous caught an edge and fell as he made his way back to the net. Cole Sillinger saw this and put a shot on goal. Bilous was sliding to get back in position, but the puck got past him to make it 1-0 for Medicine Hat.

Thirty-four seconds later, Medicine Hat doubled its lead. Jonathan Brinkman put a shot on goal from a sharp angle. Bilous thought he had it, but the puck trickled through his pads and over the line to give the Tigers a 2-0 lead 6:40 into the contest.

That goal ended Bilous’ night. He made three saves on five shots on the evening.

Carter Serhyenko came in for the remainder of the period. On a power play shortly after the change, the Tigers appeared to increase their lead when a point shot found the back of the net. However, Corson Hopwo bumped Serhyenko at the top of the crease and the goal was waved off.

In the second, the Raiders were able to respond. Aquilon tallied his first career goal at the 7:45 mark of the frame. His shot from the point got through traffic and past Mads Sogaard to make it a 2-1 game.

SCORES! @r_aquilon nets his first career WHL goal with a shot from the point!

Less than two minutes later, Moe tied the game. Aliaksei Protas found the Calgary, AB product from behind the goal line. Moe snapped a shot from the left faceoff dot that beat Sogaard for his 10th of the season – a new career high – to level the score at 2-2.

SCORES! @spencerm04 finds the back of the net with a quick shot!

The Tigers took the lead back in the third. After Brayden Watts ran into a linesmen as he was entering the zone and lost the puck, Medicine Hat came back the other way on an odd-man rush. Ryan Chyzowski hit Brett Kemp with a cross ice pass and Kemp wired a shot past Serhyenko to take the lead at 3-2.

About three minutes later, Medicine Hat doubled their lead when they scored on their fifth power play of the game. Hopwo got the puck at the side of the net and tried to jam it past Serhyenko. The Tigers forward got his own rebound and buried his second attempt to make it a 4-2 game.

The Raiders had a chance to get back in the contest late in the period. Daniil Stepanov drew a penalty and the Raiders pulled Serhyenko for the extra attacker. However, they weren’t able to get another puck past Sogaard on the night.

In relief of Bilous, Serhyenko made 27 saves in just more than 50 minutes of action. Sogaard stopped 25 shots to pick up the win for the Tigers.

The Raiders are off until Friday night when they host the Swift Current Broncos (5-13-1-2) at the Art Hauser Centre. Puck drop is 7 p.m. Tickets are available at the Raiders Office and online here.

Also, the Raiders’ auction for Ugly Christmas Sweater Night Presented By Lakeland Ford is now underway. Bid on or outright buy a jersey at 32auctions.com. The Raiders will wear the jerseys on Friday, December 13 against the Winnipeg ICE. Pick up tickets at the Raiders Office and at online here.