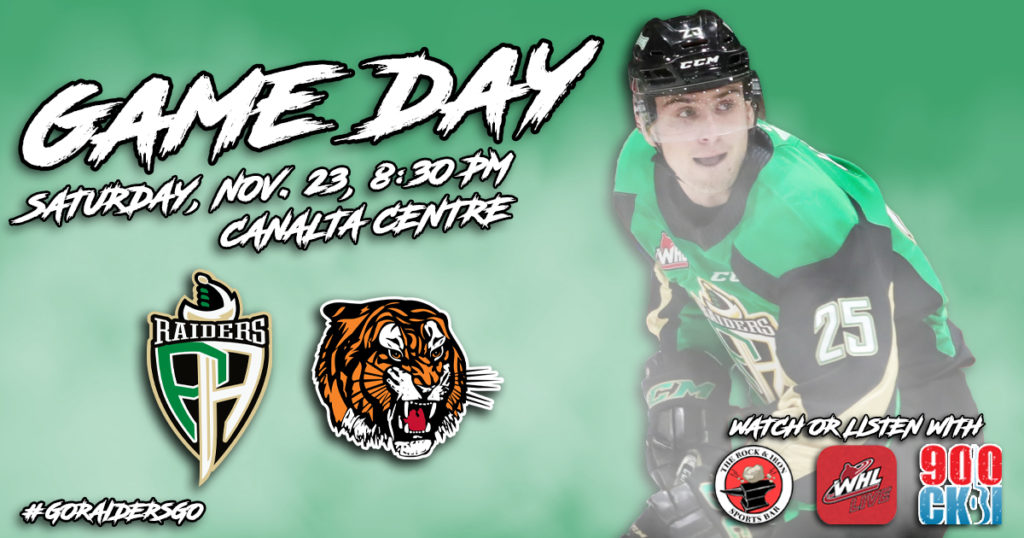 RAIDER REVIEW: The Raiders (16-4-3-1) wrap up their Alberta road trip tonight against the Tigers (15-7-1-0) in Medicine Hat at the Canalta Centre. Last night in Lethbridge, the Raiders topped the Hurricanes 5-3 at the ENMAX Centre. Aliaksei Protas had a pair of goals, while Reece Vitelli added a pair of assists. Kaiden Guhle chipped in a goal and an assist. Boston Bilous stopped 30 shots in the win.

STRIKING SHORTHANDED: Aliaksei Protas tallied his second shorthanded goal of the season last night in Lethbridge. He is one of five players with a pair of shorthanded goals this season, one of the pace set by Calgary’s Mark Kastelic. With his two goals last night, the Washington Capitals prospect is now tied for the WHL goal-scoring lead at 17 with Lethbridge’s Oliver Okuliar. Protas also leads the WHL with 36 points.

COMING UP CLUTCH: The Raiders have had 11 different players on their active roster score the game-winning goal this season. Daniil Stepanov was the latest to add his name to the list with his third-period goal on Friday night. The goal was Stepanov’s first since Oct. 12 against Moose Jaw.

DOUBLING UP: Kaiden Guhle’s two-point night was the first multi-point effort of his current four game streak. The 2020 NHL Draft prospect has a goal in each of those four games. Guhle has nine points (four goals, five assists) in 10 games this month and is tied for fourth in goal scoring among WHL defencemen.

LEAGUE LEADER: With the win on Friday night, Boston Bilous earned his 14th victory of the season to take over the WHL lead. He also leads the league in minutes played (1,250) and is tied for third in shutouts (2) this season.

IT TAKES TWO:  Reece Vitelli recorded his first two-assist performance as a member of the Raiders on Friday night .The Winnipeg product has tallied two assists in a game four times in his WHL career.

NEXT UP: The Raiders are back at the Art Hauser Centre on Friday night when the Swift Current Broncos (5-13-2-1) make their first trip to Prince Albert this year. Puck drop is 7 p.m. Tickets are available at the Raiders Office and online here.