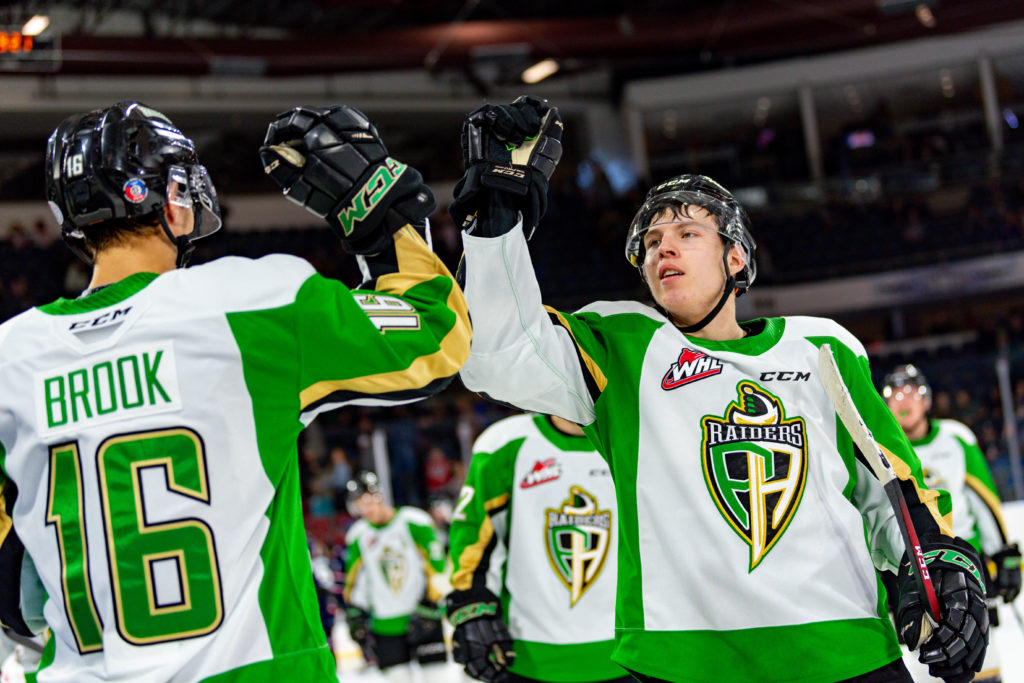 Lethbridge, AB – A third-period goal from Daniil Stepanov lifted the Prince Albert Raiders (16-4-3-1) to a 5-3 win over the Lethbridge Hurricanes (15-7-0-3) on Friday night at the ENMAX Centre.

Stepanov’s goal came 6:10 into the third and put the Raiders up 4-3 at the time. Aliaksei Protas had two goals on the night, while Reece Vitelli chipped in a pair of assists. Kaiden Guhle also had a goal and an assist for the Raiders.

It was a fast pace to start the game with the first stoppage coming 5:06 into the opening frame when the Hurricanes got the game’s first goal. Calen Addison’s shot from the point was stopped by Boston Bilous. Noah Boyko found the rebound at the side of the goal and put the puck into the net to put the home team up 1-0.

Just 1:12 later, the Raiders tied it up. Justin Nachbaur’s heavy shot from the wing was stopped by Carl Tetachuk, but he was unable to control the rebound. Ozzy Wiesblatt skated in and banged home the rebound to make it 1-1 with his 10th goal of the season.

SCORES! @ozzywiesblatt taps home a rebound to tie it up!

Guhle put the Raiders ahead with 5:40 to play in the first. As a Raiders’ power play expired, Vitelli tried to jam a puck past Tetachuk. The puck popped out to the side of the goal where Guhle deposited the rebound for his sixth goal of the year, extending his goal-scoring streak to four in the process.

SCORES! Kaiden Guhle finds the rebound just after the power play expires! That extends his goal-scoring streak to four games!

Less than two minutes later, the Raiders extended their lead to 3-1 with a shorthanded marker. Protas stripped Addison at the red line and came in on a breakaway. The Washington Capitals prospect snapped a shot past Tetachuk to collect his second shorthanded goal of the season and 16th overall with 4:12 to play in the opening frame.

SCORES! The Viper strikes shorthanded! @protas_21 strips Addison and scores on a breakaway!

The Hurricanes were able to battle back and tie the game within the first five minutes of the second period. While on the power play, D-Jay Jerome cut into the centre of the zone, made a toe-drag move and snapped a shot past Bilous to make it a 3-2 game at the 4:11 mark.

Less than a minute later, Lethbridge tied it up. Chase Wheatcroft threw a pass through the centre of the zone that got through traffic and found Logan Barlage, who put his shot into the top of the net to level the score at 3-3.

Brayden Watts had three quality chances to restore the Raiders’ lead before the end of the period. First, Spencer Moe found him with a no-look pass from behind the goal, but it was swallowed up by Tetachuk. Then, Watts was sprung on a partial breakaway but was unable to solve the Hurricanes goaltender. The third chance came on a two-on-one when Moe dished to Watts who carried to the goal and wasn’t able to get it past Tetachuck with a move to his backhand.

In the third, Moe got behind the Hurricanes’ defence and was sprung on a breakaway. His shot was stopped by Tetachuk as the goaltender slid back in his net. The play was reviewed and after a delay, the call on the ice of no goal stood.

Shortly after the review, the Raiders were able to regain their lead. Guhle put a puck towards goal that was collected by Stepanov. He made a move to his backhand to get around Tetachuk and buried his second of the year with his forehand to give the Raiders a 4-3 advantage with 13:50 to play.

SCORES! Daniil Stepanov gets a pass at the top of the crease and outwaits Tetachuk!

The Raiders were able to keep the Hurricanes at bay for the rest of the game, including killing off a late delay of game penalty.

With 9.2 seconds to play, Moe chipped a puck out of the zone with Lethbridge’s net empty. Protas fought off Addison and hit the open cage for his second of the night and 17th of the year.

Bilous made 30 saves in the Raiders’ goal to pick up his 14th win of the year. Tetachuk stopped 22 shots for the Hurricanes.

The Raiders wrap up their three-game Alberta road trip on Saturday night in Medicine Hat when they take on the Tigers at the Canalta Centre. Game time is 8:30 p.m. CST. Head to The Rock And Iron Sports Bar to watch the game, or listen to Trevor Redden on 900 CKBI.

The next Raiders’ home game is on Friday, November 29 when the Swift Current Broncos visit the Art Hauser Centre. Puck drop is 7 p.m. Tickets are available at the Raiders Office and online here.

Also, the Raiders’ auction for Ugly Christmas Sweater Night Presented By Lakeland Ford is now underway. Bid on or outright buy a jersey at 32auctions.com. The Raiders will wear the jerseys on Friday, December 13 against the Winnipeg ICE. Pick up tickets at the Raiders Office and online here.