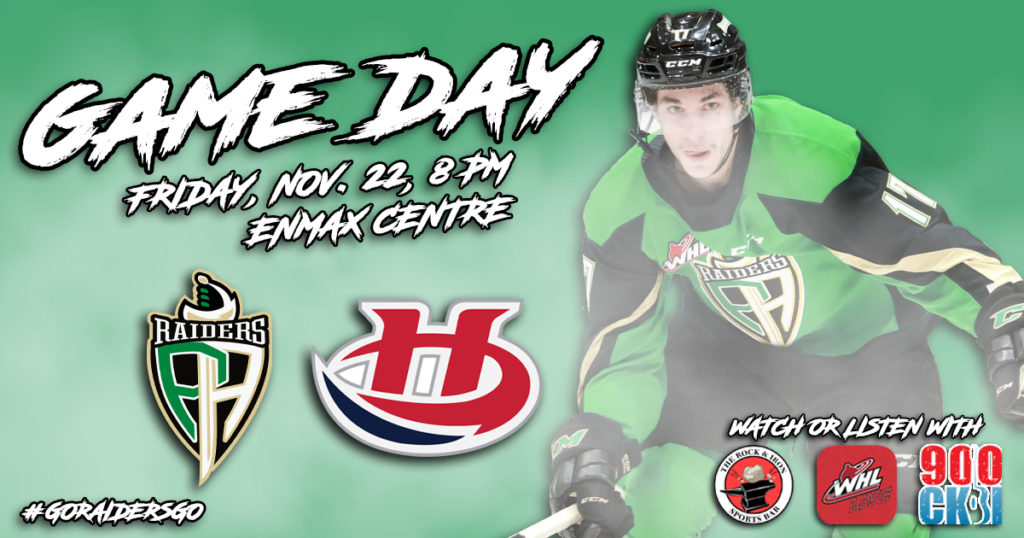 RAIDER REVIEW: The Raiders (15-4-3-1) head to Lethbridge on Friday night to take on the Hurricanes (15-6-0-3) at the ENMAX Centre. On Wednesday, the Raiders opened their road trip with a 7-1 win over the Red Deer Rebels. Evan Herman led the way with a goal and two assists. Spencer Moe and Aliaksei Protas also had a goal and an assist. Landon Kosior chipped in a pair of assists.

GETTING STARTED: For the third consecutive game, defenceman Kaiden Guhle has scored the first goal. The 2020 NHL Draft prospect is tied for the team lead in striking first with Aliaksei Protas, who also has opened the scoring three times. Guhle’s three-game point streak has brought him into the top 10 of scoring among WHL defencemen with five goals and 11 assists in 23 games.

THREES: Evan Herman recorded the first three-point game of his WHL career on Wednesday night against the Rebels.  It also extended his point streak to three games, which is the longest stretch of his young career.  Herman has a goal and five assists over that span.

BACK ON THE BOARD: Forward Justin Nachbaur ended a 15-game goalless drought on Wednesday with his second period marker. He last scored on Oct. 8 against the Vancouver Giants. Wednesday’s goal was also the second game-winning goal of his career. His last came on Feb. 21, 2018 against Lethbridge.

OFFENSIVE OUTBURST: Seven different Raiders scored a goal on Wednesday night in Red Deer, which surpasses the six goal scorers on Oct. 12 in an 8-4 win over the Moose Jaw Warriors for most in a game this season.

HOLDING AT FIVE: The Raiders held on to the fifth spot in the Kia CHL Top 10 and have now been ranked for seven consecutive weeks.

NEXT UP: The Raiders wrap up their Alberta trip tomorrow night in Medicine Hat against the Tigers (14-7-1-0) at the Canalta Centre. Game time is 8:30 p.m. CST. The next Raiders’ home game is on Friday, November 29 against the Swift Current Broncos. Puck drop is 7 p.m. Tickets are available at the Raiders Office and online here.