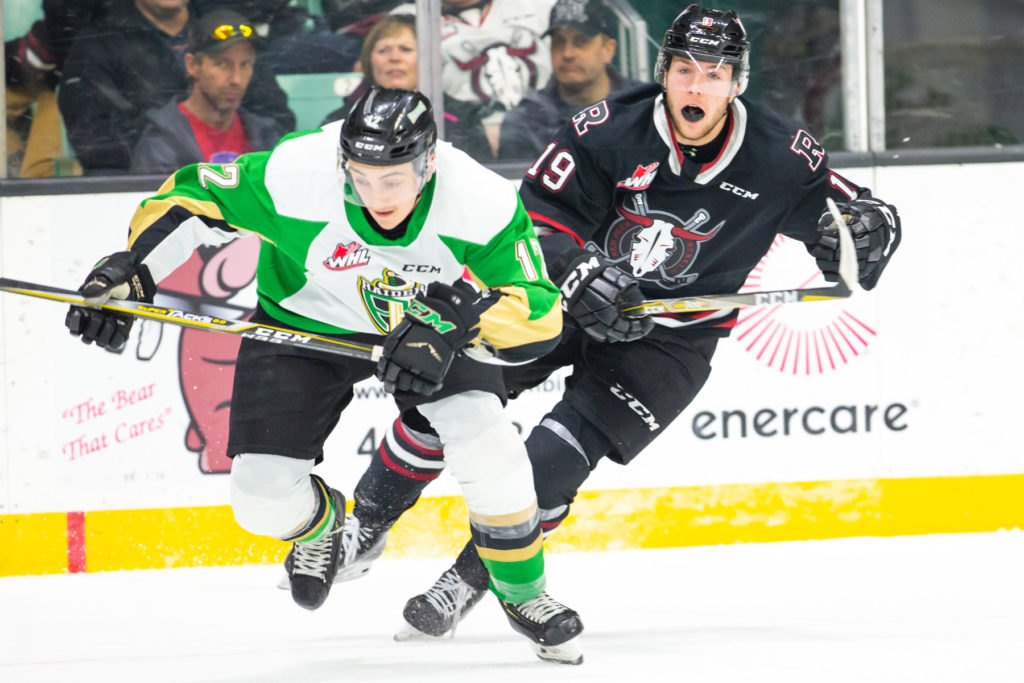 Evan Herman had a goal and two assists to lead the Raiders offensively. Aliaksei Protas and Spencer Moe each chipped in a goal and an assist, while Landon Kosior picked up a pair of helpers. Jakob Brook, Kaiden Guhle, Tyson Laventure and Justin Nachbaur also scored for the Raiders.

Early in the opening period, Guhle took a hit from Jaxsen Wiebe. Nachbaur didn’t like the hit and challenged Wiebe to a fight. Nachbaur made quick work of Wiebe as the game got off to a physical start.

Red Deer was inches away from opening the scoring. Boston Bilous stopped the first shot, but the rebound slipped through his pads. Jeremy Masella was able to sweep the puck away from the blue paint to keep it a scoreless game.

The Raiders were able to create some pressure leading to a goal just after a late-period power play expired. Kosior set Guhle up with a one-timer from the right faceoff circle. Guhle’s shot was stopped, but the rebound bounced off a Rebel in front of the and over the goal line for the 2020 NHL Draft prospect’s fifth goal of the year, making it 1-0 with 14 seconds left in the opening frame. It also gave Guhle a three-game goal-scoring streak.

SCORES! Kaiden Guhle’s shot is stopped, but the rebound goes off a Rebel in front and in.

Guhle’s goal comes with 14 seconds left in the firs, which just came to an end. We’re up 1-0 after 20 minutes.#GoRaidersGo #RDvsPA pic.twitter.com/9VdJq2ochV

Midway through the second, the Raiders doubled their lead. Nachbaur’s pressure on the forecheck let Ilya Usau pick up the puck on the wall. He skated to the top of the slot and put a shot on goal that Ethan Anders turned aside. Nachbaur was battling in front and banged home the rebound for his third goal of the year to give the Raiders a 2-0 lead.

Less than two minutes later, Laventure extended the Raiders’ lead with his third of the season. A scramble around the Rebels’ net saw Michael Horon put a puck on goal followed by Herman. Laventure was able to grab the rebound and lift it over Anders to make it 3-0 with  6:29 to play in the middle frame.

SCORES! @tysonlaventure jams home a loose puck at the side of the goal!

The Raiders exploded for four goals in the final frame. Moe got the scoring started with a power-play marker. Ozzy Wiesblatt found him at the top of the crease. Moe was able to get the puck out of his feet, onto his stick, and into the back of the net for his ninth of the season 3:38 into the period.

SCORES! @spencerm04 pots his ninth from the top of the crease!

Just 13 seconds later, Brook tallied his third of the year. The puck split the Rebels defence at the top of the blueline. Brook skated past both defenders to collect the puck in the Rebels end and released a quick shot that beat Anders to give the Raiders a 5-0 lead.

SCORES! @BrookJakob uses his speed to get a loose puck and snaps one past Anders!

Midway through the middle frame, the Raiders struck with two more goals in quick succession. On a power play, Brayden Watts hit Protas in stride. The Washington Capitals prospect beat Anders from the left faceoff circle for his 15th goal of the year with 8:43 to play.

The Viper strikes as @protas_21 makes it 6-0 with a power-play goal.

Twenty-five seconds later, Herman took a pass in the neutral zone and chipped it pass a pursuing Rebels player. Herman got the puck back, skated to the goal, and lifted a shot over Anders’ glove for his fifth of the year to make it 7-0.

.@evanherman19 chips a puck ahead to himself and scores his fifth of the year.

Late in the third, Jayden Grubbe ended Bilous’ shutout bid. He beat the Raiders netminder from the bottom of the right faceoff circle with a shortside shot with 1:38 to play, wrapping up the scoring at 7-1.

Bilous ended the game with 24 saves to pick up his 13th win of the year. Anders stopped 23 Raider attempts in the loss.

The Raiders continue their Central Division road trip on Friday night in Lethbridge against the Hurricanes at the ENMAX Centre. Puck drop is 8 p.m. CST. Catch the game at The Rock And Iron Sports Bar, or listen on 900 CKBI with Trevor Redden.

The next Raiders’ home game is on Friday, November 29 when the Swift Current Broncos visit the Art Hauser Centre. Puck drop is 7 p.m. Tickets are available at the Raiders Office and online here.

Also, the Raiders’ auction for Ugly Christmas Sweater Night Presented By Lakeland Ford is now underway. Bid on or outright buy a jersey at 32auctions.com. The Raiders will wear the jerseys on Friday, December 13 against the Winnipeg ICE. Pick up tickets at the Raiders Office and online here.