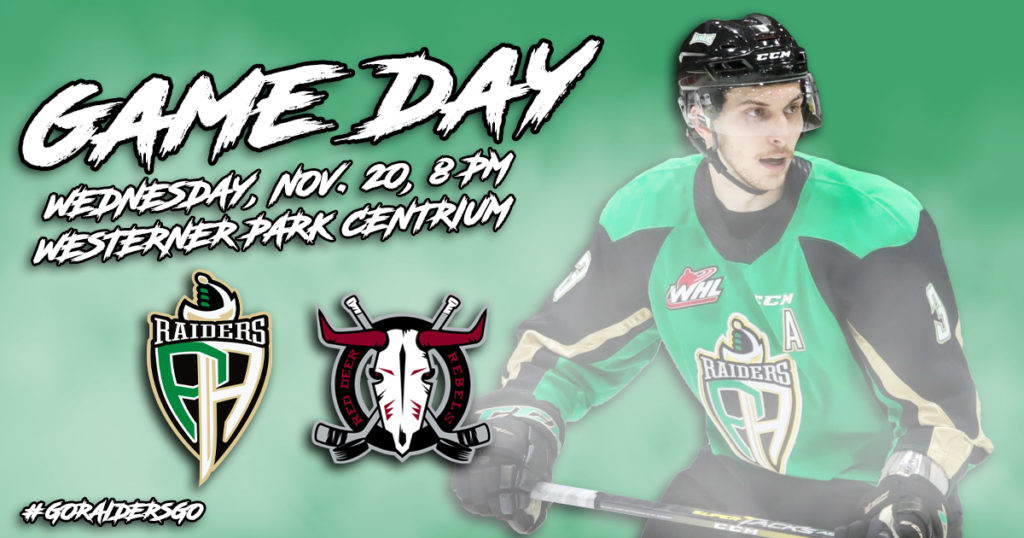 RAIDER REVIEW: The Raiders (14-4-3-1) open their three-game road trip tonight against the Rebels (7-11-0-3) in Red Deer.  On Sunday, the Raiders downed the Calgary Hitmen 5-4 in overtime at the Art Hauser Centre. Brayden Watts and Ozzy Wiesblatt each scored twice in the win. Spencer Moe added a pair of assists. Boston Bilous picked up his 12th win of the year with 15 saves.

MILESTONE MARKER: Brayden Watts scored his 50th goal of his WHL career as part of his two-goal night on Sunday. In his 274-game WHL career, the Bakersfield, CA product has 75 assists to go along with his 51 goals. Watts is tied for second in team scoring with 12 goals and 14 assists in 20 games this season. His two-goal game was also the seventh multi-point effort of the year, tying him for the team lead with Aliaksei Protas.

BACK  TO BACK: For the second time this season, Kaiden Guhle has scored in consecutive games. The 2020 NHL Draft eligible prospect has four goals this year, which is a new career high. Guhle is two points away from tying his rookie total of 17 points.

WINNER WINNER: Ozzy Wiesblatt tallied his fifth career game-winning goal on Sunday night in overtime against the Calgary Hitmen. It was Wiesblatt’s first career goal in the extra frame. The 2020 NHL Draft eligible prospect has nine goals and 17 assists this year.

HEATING UP: Evan Herman has been picking up points since the calendar flipped to November. The rookie from The Pas, MB has three goals and three assists in eight games this month., which accounts for 75 percent of his points this year.

NEXT UP: The Raiders continue their Alberta swing on Friday night in Lethbridge against the Hurricanes. Game time is 8 p.m. The next Raiders’ home game is on Friday, November 29 against the Swift Current Broncos. Puck drop is 7 p.m. Tickets are available at the Raiders Office and online here.