Raiders Wrap Up Homestand By Taking Out Hitmen 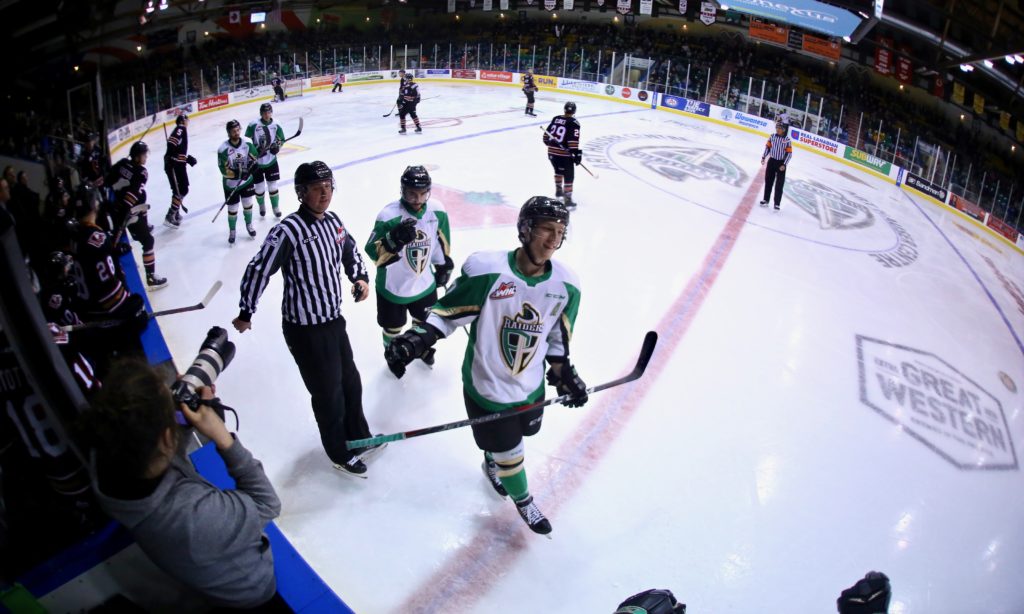 Parker Kelly had two goals and an assist to pace the Raiders offensively. Dante Hannoun, Ozzy Wiesblatt, Cole Fonstad, and Sergei Sapego also had multi-point games in the win.

The Raiders controlled the play early on the game, registering the first eight shots on net. One of those was a power-play goal by Wiesblatt. The rookie from Calgary converted the rebound from Aliaksei Protas’ shot for his ninth of the season.

Late in the period, the Raiders cashed in another. After Hannoun’s shot hit a skate in front, a Calgary defender cleared the puck to the blueline. Brayden Pachal got control and his shot from the point found the back of the net past a sprawled Jack McNaughton with 47 seconds remaining the period, putting the Raiders ahead 2-0.

The Raiders finished the opening 20 minutes with a 15-4 margin in the shot clock.

Midway through the second, the Hitmen cut the lead in half. Riley Stotts finished off a backdoor pass from James Malm at the 8:21 mark of the frame.

About a minute, Fonstad restored the Raiders’ two-goal advantage. The Montreal Canadiens prospect skated in the slot and went bar down on McNaughton for his 16th goal of the year.

Another minute later, the Raiders added another goal. Hannoun got free in the slot and wired a shot into the top corner for his first goal as a Raider and 20th of the season. It was also the 251st point of his WHL career and now sits one goal back of 100.

The Hitmen got one of the goals back with a shorthanded strike. The Raiders turned the puck over in their own end, letting Carson Focht find Luke Coleman. The ex-Raider snapped a shot past Scott to make it 4-2 with 6:45 to play in the period.

Before the second period ended, the Raiders made it a three-goal game again. On a Raiders’ power play, Fonstad set up Brett Leason in the slot. Leason was able to turn, fire and beat McNaughton to put the Raiders up 5-2 after the second.

In the third, Kelly scored the first of his two goals in the period. The Ottawa Senators prospect forced a turnover that was picked up by Hannoun. The overager gave it right back to Kelly who snapped a shot over McNaughton’s glove for his 19th of the year 3:13 into the frame.

About two minutes later, the Hitmen got on the board again. Stotts skated through the neutral zone into the Raiders zone and fired a shot past Scott for his second of the contest.

The Raiders were able to get it right back. Spencer Moe went wide around a defender and fed Kelly with a cross-crease pass, who tapped it into the open goal.

Scott stopped 21 shots to earn his second consecutive win and 26th of the season. McNaughton was peppered with 41 shots on the evening and made 34 saves.

The Raiders hit the road for the next three weeks as the Art Hauser Centre is converted for the 2019 Canadian Junior Curling Championships. They open a six-game road trip through BC on Wednesday night in Prince George against the Cougars (15-22-1-2). Puck drop is 9 p.m. at the CN Centre. Tickets are available at raiderhockey.com and the Raider Office.