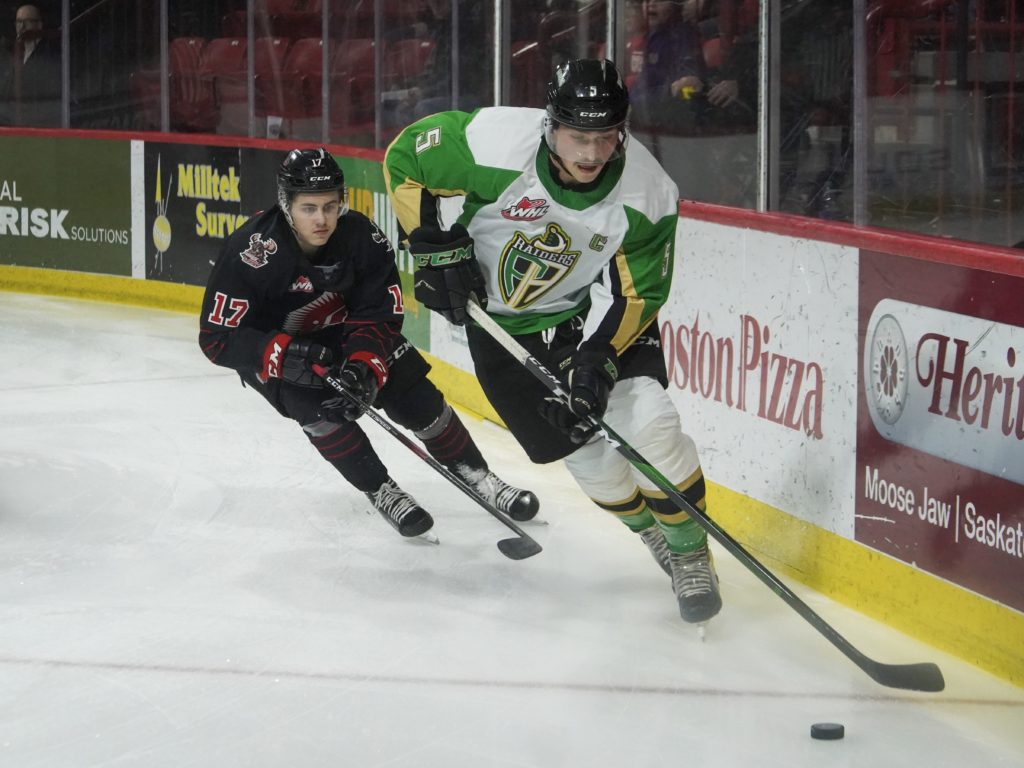 Early in the game, the Raiders almost drew first blood. Protas made a great feed to Moe, but the Calgary product put his shot off the post with a defender draped all over him.

The Raiders were able to get the game’s first goal at the 5:49 mark of the opening period. Protas carried the puck into the zone, cut across the slot to draw the attention of the defenders and goaltender Bailey Brkin. The Washington Capitals prospect slipped a pass over to Brayden Watts, who slapped a one-timer into the empty side of the net for his seventh goal of the season to make it 1-0.

SCORES! @brayden_watts29 opens the scoring with his seventh of the year! Great dish from Aliaksei Protas to set it up.

Just 18 seconds later, the Raiders doubled their lead. Watts sprung Protas and Moe on a two-on-one rush into the Moose Jaw end. Protas elected to keep the puck and snapped a shot past Brkin for his 11th goal of the year to give the Raiders a 2-0 lead.

SCORES! @protas_21 keeps and snipes on a two-on-one rush!

With about five minutes to play in the first, a hit by Jeremy Masella led to a few players tangling up. Masella squared off with Owen Hardy; Justin Nachbaur and Matthew Benson got involved; and Ilya Usau and Brayden Tracey wrestled at centre ice. Coming out of the scrum, Masella and Hardy were given unsportsmanlike conduct penalties and fighting majors. Also, Usau and Benson were assessed fighting majors and game misconducts.

Before the end of the period, Evan Herman increased the Raiders’ lead. Ozzy Wiesblatt got into the zone and put a shot on goal that was stopped by Brkin. Herman was positioned at the top of the crease and banged home the rebound for his second of the season, putting the Raiders up 3-0 after 20 minutes.

SCORES! @evanherman19 finds the rebound in front of the goal and bangs it home!

In the second, Moe was able to increase the Raiders’ lead. Moe streaked down the left wing and snapped a shot far side past Brkin for his fifth of the year and third of the weekend, making it 4-0 at the 4:09 mark. The goal ended the Brkin’s night. He made 18 saves in his just more than 24 minutes of action.

SCORES! @spencerm04 snaps it far side past Brkin!

However, the goalie change didn’t stop the Raiders from scoring. On a power play a little more than a minute after Moe’s goal, Wiesblatt worked the puck to Landon Kosior at the point, who hit Protas on the left wing. Protas was given time and he picked the corner on Adam Evanoff for his second of the game and 12th of the year.

SCORES! The Viper strikes again! @protas_21 gets second of the game, this time on the power play.

Late in the second, Carter Serhyenko was able to preserve the five-goal lead. He made a sprawling save on Eric Alarie at the top of the crease. Moments later, he denied Brayden Tracey on a breakaway to keep it a 5-0 game after two periods.

What a save by Carter Serhyenko!

Serhyenko kept his shutout alive until the final minutes of the third period. A shot from the point was deflected by a Raider and then Ryder Korczak to change the puck’s direction twice to get it past the Raiders rookie goaltender, making it 5-1 with 2:48 to play.

The rookie from Saskatoon didn’t allow anything else to the Warriors on the evening. Serhyenko finished with 32 saves for his second victory of the season. Evanoff made 12 saves in relief for the Warriors.

The win extended the Raiders’ winning streak to four games.

Up next for the Raiders is a trip to Edmonton on Tuesday night to take on the Oil Kings (11-1-3-0) in a battle of two of the top teams in the WHL. Puck drop at Rogers Place is 8 p.m. Catch the game at The Rock And Iron Sports Bar, or listen to Trevor Redden on 900 CKBI.

The next Raiders’ home game is on Friday, November 8 when the Brandon Wheat Kings (7-10-0-0) make their first trip to the Art Hauser Centre. Puck drop is 7 p.m. Tickets are available at the Raiders Office and at raiderhockey.com.