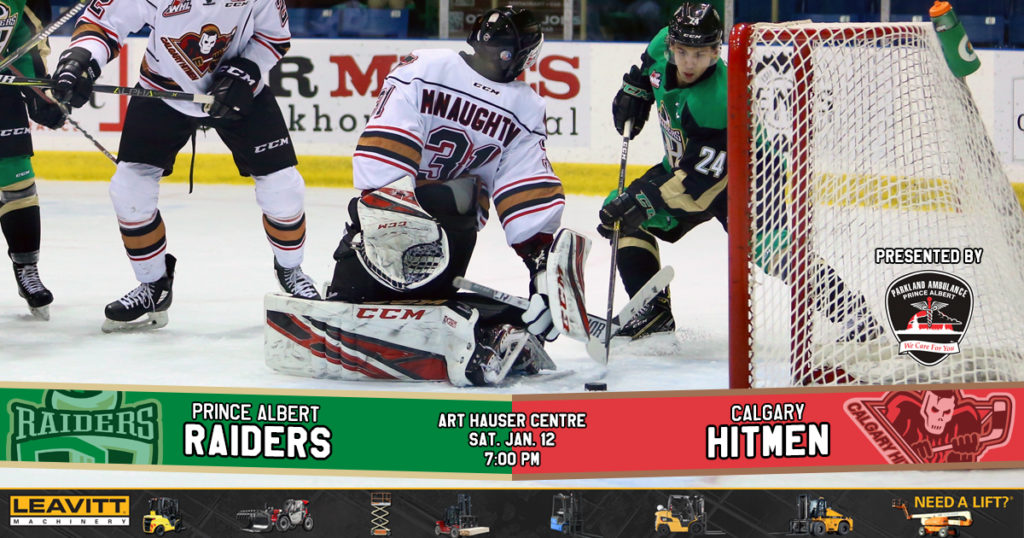 RAIDER REVIEW: The Raiders (36-5-0-1) wrap up their homestand tonight against the Calgary Hitmen (21-16-3-1) at the Art Hauser Centre for the Second Annual Sock Hop Presented By Parkland Ambulance. Last night, the Raiders doubled up the Portland Winterhawks 4-2 in Prince Albert. Brett Leason (1g-1a), Zack Hayes (1g-1a), and Noah Gregor (2a) had multi-point nights for the Raiders. Cole Fonstad and Sean Montgomery also found the back of the net in the win. Ian Scott made 27 saves to earn his 25th win of the season.

VS. CALGARY: This is the third meeting of the year between the Raiders and the Hitmen. The Raiders have won both games against the Hitmen so far this season.

MOVING UP: Brett Leason continues to rise in draft rankings. Earlier this week, Leason was ranked 19th by Sportsnet’s 2019 NHL Draft Prospect Rankings. Leason’s talent is well known by the Hitmen this. The Calgary product has four goals and three assists in two games played against his hometown team this year. Leason also leads to the WHL with eight game-winning goals this season.

HAYESER WITH A LASER: One game after Jeremy Masella snapped a lengthy goalless drought, Zack Hayes did the same on Friday night with a goal to end a 28-game skid without a goal. His last goal came on October 20 against the Spokane Chiefs. It was also the second multi-point game from the blueliner from Calgary this season.

NEW CAREER BEST: Ian Scott set a new career high with his 25th win of the season in just 30 games played on Friday night over the Winterhawks. His previous career best was set last season with 24 wins in 50 contests. The Toronto Maple Leafs prospect has posted a record of 25-4-0-1 this season with a 1.74 goals-against average, a 0.939 save percentage, and four shutouts.

MAGIC NUMBER: Four continues to be a special threshold for the Raiders this season. When scoring four or more goals in a game, the Raiders have a 31-0 record. When scoring fewer than four, they have won just five of those 11 games.

NEXT UP: The Raiders hit the road for two weeks as they open their BC road trip on Wednesday night in Prince George against the Cougars (14-22-1-2). Game time is 9 p.m. CST at the CN Centre. The next Raiders’ home game is on Friday, February 1 against the Edmonton Oil Kings. Tickets are available at raiderhockey.com and the Raider Office.