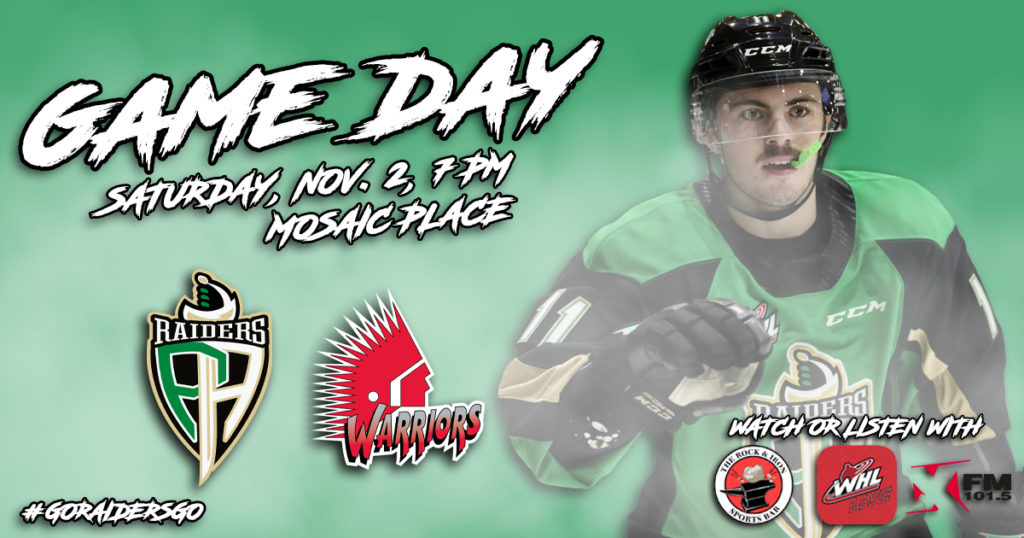 RAIDER REVIEW: The Raiders (10-2-3) head to Moose Jaw tonight to take on the Warriors (7-6-1-0) at Mosaic Place. Last night at the Art Hauser Centre, the Raiders doubled up the Regina Pats 6-3. Spencer Moe had a four-point night with two goals and two assists. Aliaksei Protas had three points, while Brayden Watts, Ozzy Wiesblatt, and Reece Vitelli each picked up a goal and an assist.

CLOSING STRONG: The Raiders set a new season-high for goals in a period by striking five times in the third on Friday night. The previous high was a four-goal second period on Oct. 5 against the Pats.

FOUR SPOT: Spencer Moe recorded the first four-point night of his WHL career on Friday night against Regina. The Calgary, AB product’s previous career high was three points achieved three times. Moe has four goals and nine assists in 15 games this season, with all his points coming on Sept. 28  or later.

CAREER MARK: Boston Bilous earned his ninth win between the pipes this season on Friday, which is a new career high. The Langley, BC product posted eight wins last season split between the Raiders and the Edmonton Oil Kings. He is also just 63 minutes away from surpassing his career high in minutes played, which was 897 set last year.  Bilous has a 9-1-3-0 record this year with a 2.04 GAA and a 0.913 save percentage.

VITELLI’S MILESTONE: Centreman Reece Vitelli played in his 150th career WHL game on Friday night. He marked the occasion by picking up a goal and an assist to reach 43 points for his career.

DOUBLE THE POWER: For the first time this season, the Raiders scored two power-play goals in a single game. Ozzy Wiesblatt’s marker with the man advantaged in the third period snapped a drought of 12 power plays without a goal.

NEXT UP: The Raiders hit the road for two games in Alberta next week, beginning on Tuesday night in Edmonton against the Oil Kings. The next Raiders’ home game is on Friday, November 8 when the Brandon Wheat Kings visit the Art Hauser Centre. Tickets are available at the Raiders Office and online here.