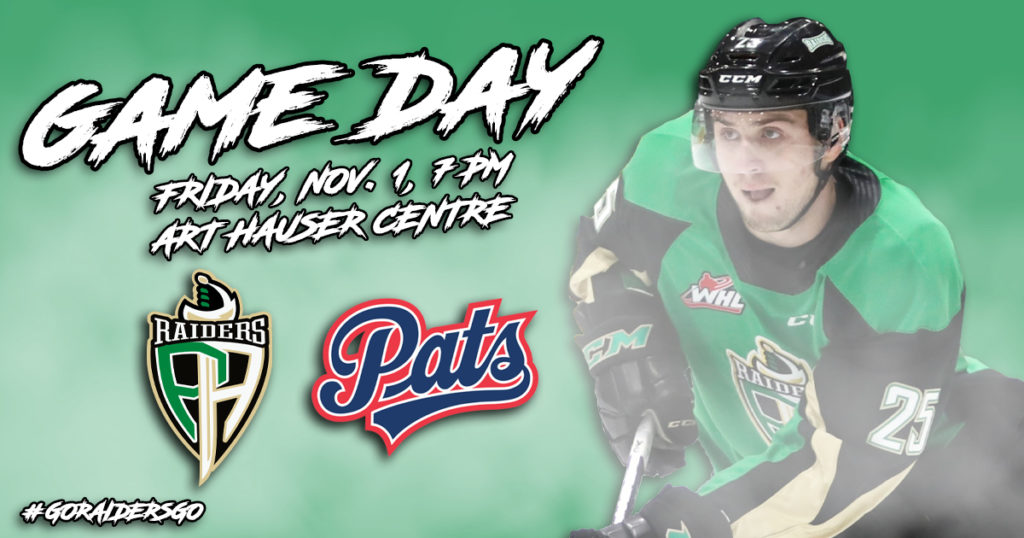 RAIDER REVIEW: The Raiders (9-2-3) are back at the Art Hauser Centre to take on the Regina Pats (2-10-1-0) tonight. Last weekend, the Raiders wrapped up their US Division road trip with a 4-1 win over the Spokane Chiefs. Aliaksei Protas led the way for the Raiders with a pair of goals. Landon Kosior and Ilya Usau also scored. Boston Bilous earned the win with a 21-save effort.

OCTOBER WRAP: The Raiders posted a 5-2-2-0 record in October, ending the month with consecutive wins. Aliaksei Protas led the team in scoring during October with 12 points (six goals, six assists) in 10 games. The hot month helped the Washington Capitals prospect reach third in the WHL in scoring with 19 points (nine goals 10 assists) on the season.

POINT PROVEN: Rookie Ilya Usau had a productive October for the Raiders. He scored 11 of his 12 points during the month and was only held of the scoresheet three times out of the 10 games played. Usau is now fourth in team scoring and tied for third among WHL rookies.

SHORTHANDED: Aliaksei Protas scored the Raiders’ first shorthanded goal of the season on Saturday night in Spokane. Last season, the Raiders led the WHL with 23 shorthanded goals during the regular season. Brett Leason was tops on the team with six.

HOLDING STRONG: For the second straight week, the Raiders are fourth in the Kia CHL Top 10. The Raiders are one of three WHL teams in the Top 10, led by the Edmonton Oil Kings at second.

NEXT UP: The Raiders are back on the road on Saturday night when they head to Mosaic Place to take on the Moose Jaw Warriors. Game time is 7 p.m. The next Raiders’ home game is on Friday, November 8 when the Brandon Wheat Kings make their first trip to Prince Albert. Puck drop is 7 p.m.