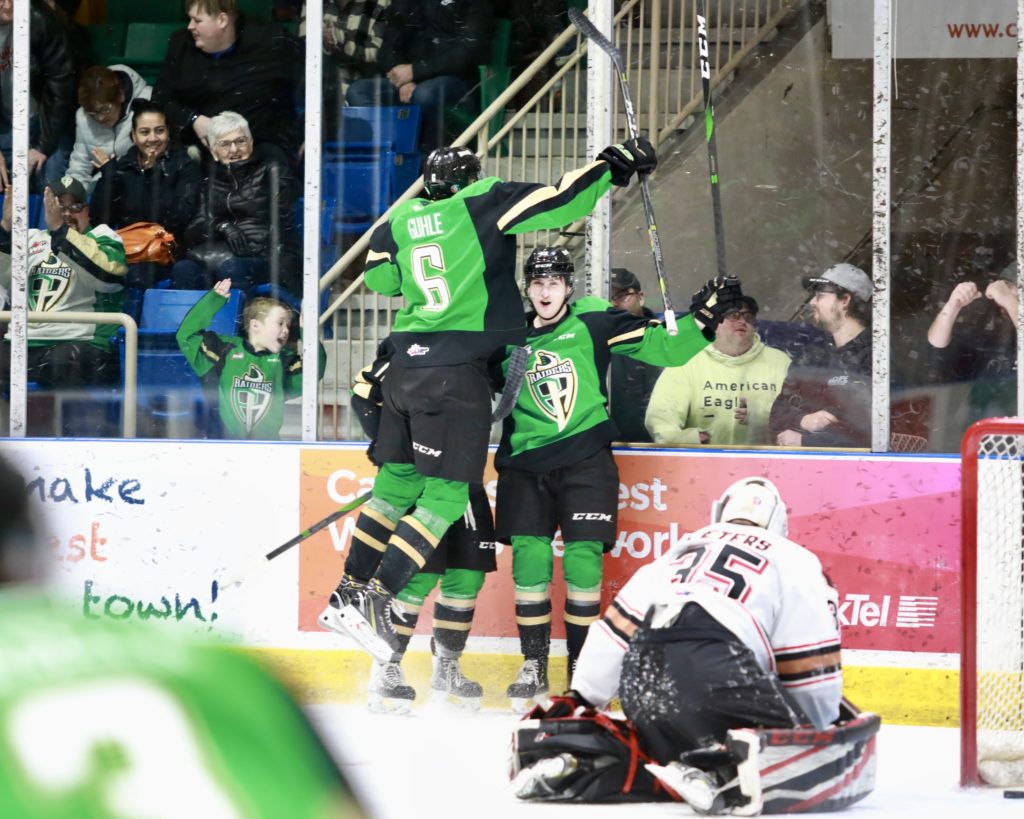 Prince Albert, SK – Brayden Watts and Ozzy Wiesblatt each had a pair of goals as the Prince Albert Raiders (14-4-3-1) erased a late third-period deficit in a 5-4 overtime win on Sunday night against the Calgary Hitmen (10-6-2-1) at the Art Hauser Centre.

It was the second two-goal game for both Watts and Wiesblatt on the season. Spencer Moe continued his strong play after his scoring streak was snapped, chipping in a pair of assists.

The two teams traded chances in the first half of the opening period. Brayden Peters stood tall and robbed Ilya Usau’s backhand attempt off a turnover in front of the goal. At the other end, Boston Bilous slid across to take a goal away from Jonas Peterek on a two-on-one rush.

The Raiders opened the scoring with 4:04 remaining in the opening period. With his team on the power play, Landon Kosior set up Kaiden Guhle with a one-timer at the right faceoff circle and the Sherwood Park product’s shot beat Peters for his fourth goal of the year.

Before the end of the period, the Hitmen tied the game with a shorthanded marker. Blake Allan took a bouncing puck at the Raiders’ blueline and skated in on a breakaway. He snapped a shot past Bilous to make it a 1-1 game after 20 minutes.

Watts struck 3:15 into the second period to restore the Raiders’ lead. He stripped Egor Zamula of the puck at the Calgary blueline, protected the puck from Jett Woo and used his backhand to slide it through Peters for his 11th goal of the year. It was also the 50th goal in Watts’ WHL career.

The lead held until the opening minutes of the third period when the Raiders ran into penalty trouble. While short two skaters, Jett Woo set up Riley Stotts with a one-timer at the bottom of the faceoff circle to level the score at 2-2 less than four minutes into the third.

At the 6:27 mark of the third, the Raiders regained the lead. Aliaksei Protas centering pass to Moe was put on goal, but Peters made the stop. Watts followed up the play and banged home the rebound for his second of the night to put the Raiders up 3-2.

Calgary found the equalizer again with 7:36 to play in the third. Adam Kydd picked off a pass at the blueline and beat Bilous with a quick wrist shot in the slot to make it 3-3.

The Hitmen took their first lead of the game with 4:22 left in regulation. Dakota Krebs skated down the left wing of the zone. He threw the puck towards goal and Josh Prokop got his stick on it to deflect it into the net to give the Hitmen the 4-3 lead.

With 2:16 to play, Ozzy Wiesblatt tied it up. He took a drop pass from Jeremy Masella at the offensive blueline, skated through the slot, split two Hitmen defenders, and snapped a shot over a sliding Peters for his eighth goal of the season to send the game to overtime at 4-4.

In the extra frame, Moe stripped Orca Wiesblatt of the puck at the blueline and entered the Hitmen zone on a two-on-one with Ozzy Wiesblatt. Moe made a saucer pass over Woo’s stick to find Ozzy Wiesblatt, who made a move to his backhand and beat an off-balance Peters to end the game.

Bilous finished the game with 15 saves for this 12th win of the year. Peters stopped 22 Raider attempts in a losing effort.

The Raiders are off to Alberta this week for a three-game trip, beginning on Wednesday night in Red Deer against the Rebels (7-11-0-3) at the Westerner Park Centrium. Puck drop is 8 p.m. CST.

The next Raiders’ home game is on Friday, November 29 when the Swift Current Broncos (4-11-1-2) make their first trip to the Art Hauser Centre this season. Game time is 7 p.m. Tickets are available at the Raiders Office and online here.

Also, the Raiders’ auction for Ugly Christmas Sweater Night Presented By Lakeland Ford begins on Monday afternoon at 1 p.m. CST. Bid on or outright buy a jersey at 32auctions.com/UglyChristmasSweaters.