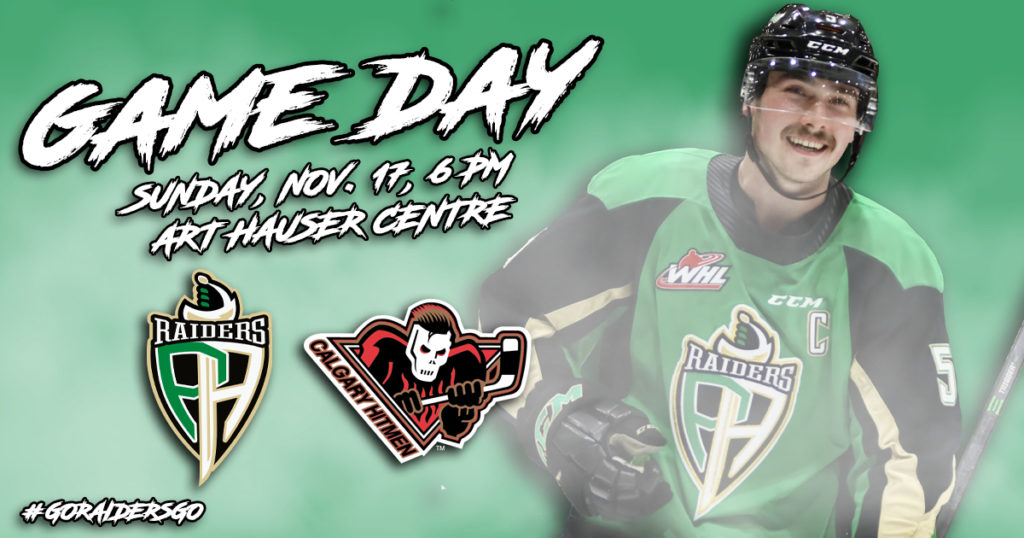 RAIDER REVIEW: The Raiders (13-4-3-1) host the Calgary Hitmen (10-6-1-1) tonight at the Art Hauser Centre. Last night in Regina, the Raiders picked up a point in a shootout loss to the Pats. Kaiden Guhle, Aliaksei Protas, and Reece Vitelli all scored in regulation for the Raiders. Evan Herman chipped in a pair of assists. Boston Bilous stopped 24 shots in a losing effort.

CAREER MARK: With his goal on Saturday night, Kaiden Guhle tied his career high for goals in a season with three. The 2020 NHL Draft eligible defenceman is three points shy of his total of 17 points set during his rookie season last year.

DOUBLING UP: Evan Herman’s pair of assists on Saturday night was the first multi-point effort of his WHL career.  The assists were also Herman’s first helpers since Oct. 5 against the Pats at the Art Hauser Centre. Hailing from The Pas, MB, Herman has four goals and three assists in 18 games played during his rookie season.

TOPS ON THE TEAM: Ozzy Wiesblatt assisted on Aliaksei Protas’ goal on Saturday, which gave him 17 on the season. The Calgary, AB product is now tied for the team lead in assists with Protas. The 2020 NHL Draft prospect has 24 points this season, putting him in a tie for second in team scoring.

NOVEMBER NUMBERS: After scoring on Saturday night, Aliaksei Protas has at least a point in six of the seven games the Raiders have played in November. The Washington Capitals draft pick has five goals and seven assists in the month. Protas is second in league scoring with 31 points on the year.

NEXT UP: The Raiders head out on an Alberta trip, beginning on Wednesday night in Red Deer against the Rebels. Game time is 8 p.m. The next Raiders’ home game is on Friday, November 29 against the Swift Current Broncos. Tickets are available at the Raiders Office and online here.