Raiders Pick Up Point In Shootout Loss To Pats 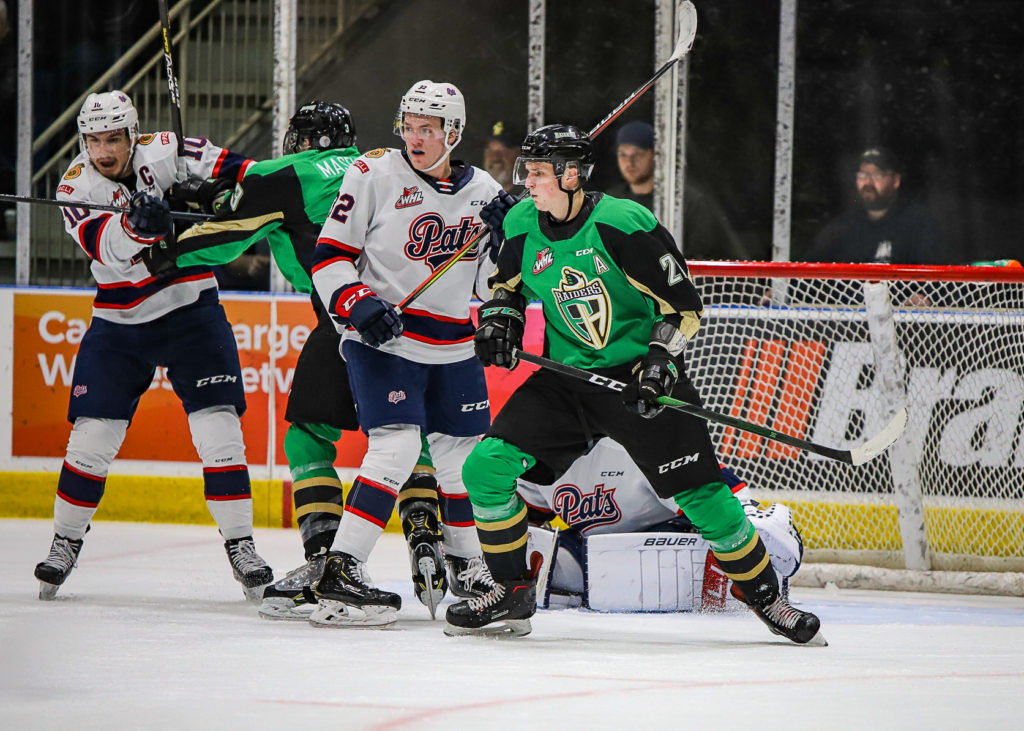 Ty Kolle scored the lone goal of the shootout to win the extra point for the Pats. Max Paddock stopped all three Raider shooters.

Kaiden Guhle, Aliaksei Protas, and Reece Vitelli had the Raiders’ goals in regulation. Evan Herman chipped in with a pair of assists.

The Raiders opened the scoring midway through the first period with a power-play goal. Herman put a shot on goal that was stopped by Paddock. Guhle collected the rebound and put it past Paddock for his third goal of the year.

SCORES! Kaiden Guhle buries the rebound on the power play!

With 6:31 to play in the first, Regina tied it up. Austin Pratt’s shot off the rush was turned away by Boston Bilous’ blocker. However, the puck ended up at the faceoff circle and Kolle’s rebound found the back of the net.

Less than two minutes later, newly acquired Carter Chorney put the Pats ahead. Chorney stood at the top of the crease and redirected Tyson Feist’s shot past Bilous to make it a 2-1 game.

The Raiders started the second period with a power play and came inches away from tying the game. Guhle’s one-timer attempt hit the post near the end of the man advantage.

Regina extended its lead at the 4:09 mark of the middle frame. The Pats forced a turnover behind the Raiders’ net. Garrett Wright got the puck in front for Logan Nijhoff, who got his shot through Bilous to give Regina a 3-1 lead.

Vitelli got the Raiders back within one with 7:16 to play in the second. Cole Nagy laid a big hit on a Pat the offensive blueline. Herman dug the puck out and found a cutting Vitelli. The Winnipeg, MB product snapped a shot past Paddock, making it 3-2 for Regina with his second of the year.

SCORES! A big hit by @ColeNagy pops the puck out to @reecevitelli9 who gets his second as a Raider!

Less than seven minutes into the third, Protas found the equalizer. He took a drop pass from Ozzy Wiesblatt and fired a shot from the top of the slot that beat Paddock for his 14th goal of the season.

SCORES! The Viper strikes to tie the game! @protas_21 takes the drop pass from Ozzy Wiesblatt and wires it home.

The Pats thought they took the lead with about four minutes to play in regulation. While the Pats were on the power play, Pratt knocked down a clearing attempt with his hand. The puck found the stick of Kolle and he put it past a sprawling Bilous. After review, the call on the ice was reversed due to a hand pass.

Neither team was able to find the back of the net for the rest of regulation. A late Raiders’ penalty carried into overtime, but Prince Albert was able to kill it off. The Raiders had a power play of their own with 1:15 to play in the extra frame, but were unable to solve Paddock.

In the shootout, Kolle scored in the first round when he froze Bilous. Ilya Usau, Brayden Watts, and Protas were all stopped by Paddock to clinch the win for the Pats.

Bilous finished the game with 24 saves in regulation and overtime and two of three in the shootout. Paddock stopped 33 Raider attempts and all three shooters in the shootout.

The Raiders are back in action on Sunday evening when they return to the Art Hauser Centre to take on the Calgary Hitmen (10-6-1-1). Puck drop is 6 p.m. Tickets are available at the box office which opens at 10 a.m. on Sunday morning, and online here.