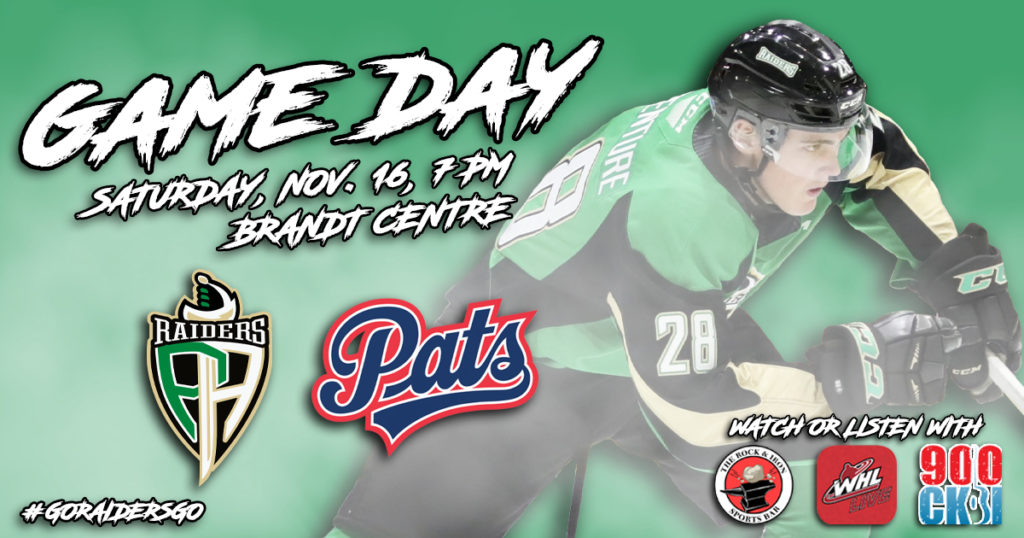 RAIDER REVIEW: After a week off, the Raiders (13-4-3-0) head to Regina to take on the Pats (2-12-2-0) tonight at the Brandt Centre. The Raiders are coming off a 3-2 loss to the Red Deer Rebels last weekend at the Art Hauser Centre. Brayden Watts led the Raiders with a goal and an assist. Aliaksei Protas scored the other Raiders’ goal. Carter Serhyenko made 24 saves in the loss.

MAKING THE LIST: Ilya Usau was added to NHL Central Scouting’s updated Players To Watch List this week. The rookie forward was given a ‘C’ rating, which indicates a potential fourth-to-sixth-round pick. With seven goals and 11 assist in 20 games, he is third in WHL rookie scoring. Usau joins Jakob Brook, Kaiden Guhle, Landon Kosior, and Ozzy Wiesblatt on NHL Central Scouting’s list.

WELCOME ABOARD: The Raiders acquired 2001-born forward Michael Horon from the Seattle Thunderbirds on Saturday night. Horon, from Lethbridge AB, had a goal and seven assists for the Thunderbirds to start his rookie season.

CAREER NUMBERS: Brayden Watts’ assist on Saturday night gave the overager 75 assists in his WHL career.  The Bakersfield, CA product is also one goal away from reaching 50 for his WHL career. Watts is second in team scoring with 10 goals and 14 assists in 18 games played.

STAYING HOT: With an assist on Saturday against the Rebels, Spencer Moe extended his point streak to a career-high seven games. The Calgary product has six goals and six assists over that span to lift him to fourth on the team in scoring with 20 points (eight goals, 12 assists).

NEXT UP: The Raiders return to the Art Hauser Centre on Sunday night to face off against the Calgary Hitmen (9-6-1-1). Puck drop is 6 p.m. Tickets are available online here and at the Box Office on Sunday morning.