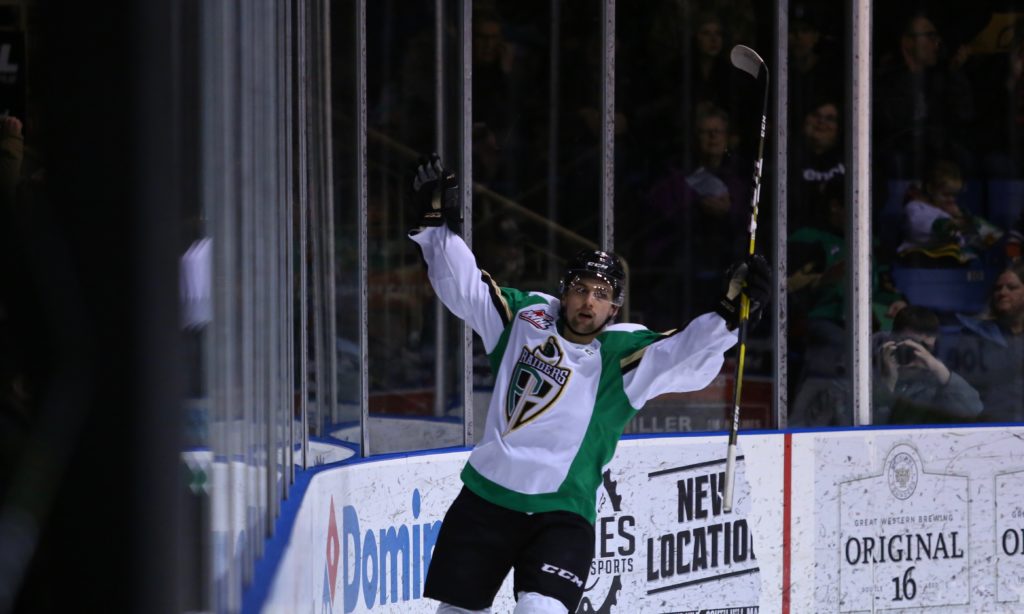 Prince Albert, SK –  Brett Leason scored the game winner midway through the third to lift the Prince Albert Raiders (36-5-0-1) to a 4-2 win over the Portland Winterhawks on Friday night at the Art Hauser Centre.

It was Leason’s second point of the game and first goal since coming back to the Raiders following his time with Team Canada. Zack Hayes and Noah Gregor also had multi-point efforts in the win.

Both goaltenders made set the tone early in a fast-paced game with strong saves. Scott robbed Joachim Blichfeld point-blank. At the other end, Joel Hofer – making his Winterhawks debut – robbed Parker Kelly on an odd-man rush.

The Winterhawks got the scoring going 6:57 into the game. Seth Jarvis skated into the slot and snapped a shot through traffic that beat Ian Scott to make it 1-0.

Five minutes later, the Raiders tied it up. Gregor entered the zone and fired a shot on Hofer that was stopped. Cole Fonstad pounced on the rebound and slapped a shot off the cross bar and in with 8:02 to go.

Zack Hayes gave the Raiders their first lead of the game with 4:20 to play in the opening period. His shot from the point beat Hofer five-hole for his third goal of the season, putting the Raiders up 2-1.

Less than two minutes later, Portland tied the game again by taking advantage of a two-man advantage. Cody Glass fired a cross-ice pass to Jake Gricius who made no mistake with the backdoor feed to make it a 2-2 game after 20 minutes.

The two goalies kept the offences at bay in the second period as they both turned aside nine shots in the frame. Most notably, Glass got behind the defence with a breakaway. Scott was able to make the save on his World Juniors teammate and the rebound was cleared.

That set the stage for Leason to tally his WHL-leading eighth game-winning goal of the year. He broke down the right wing and fired a shot through Hofer’s five-hole to put the Raiders ahead with 11:08 to play.

Late in the third, Sean Montgomery found the open net with a clearing attempt from behind his own goal line for his 18th goal of the year, wrapping up the scoring 4-2.

Scott made 27 saves to earn his 25th win of the year, setting a new career high in the process. Hofer stopped 25 shots in a losing effort for the Winterhawks.

The Raiders play their final home game of January tomorrow night when the Calgary Hitmen (20-16-3-1) visit the Hauser on the Second Annual Sock Hop Presented By Parkland Ambulance. Puck drop is 7 p.m. Tickets are available at raiderhockey.com and the Raider Office.