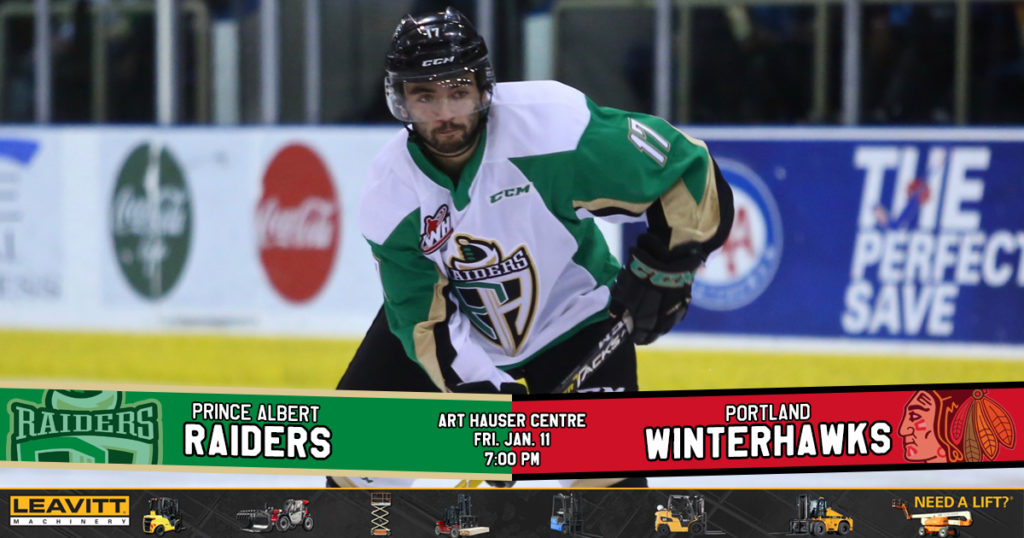 RAIDER REVIEW: The Raiders (35-5-0-1) take on the Winterhawks (25-11-3-2) tonight as Portland makes its biennial visit to the Art Hauser Centre. On Wednesday, the Raiders dropped a 4-1 game to the visiting Seattle Thunderbirds. Jaxan Kaluski netted his first career WHL hat trick in the win for Seattle. Jeremy Masella scored the lone goal for the Raiders in the win. Ian Scott stopped 30 shots in the loss for the Raiders.

VS. US DIVISION: This season, the Raiders have won three of their four games against the US Division this season, defeating the Everett Silvertips, Spokane Chiefs, and Tri-City Americans before the New Year.

TRADE DEADLINE RECAP: The Raiders were busy at the WHL Trade Deadline on Thursday. The first deal of the day saw 2001-born winger Bryce Bader join the team from the Calgary Hitmen. Then, the Raiders added 2000-born defenceman Loeden Schaufler from the Seattle Thunderbirds. The Raiders also added 2001-born goaltender Boston Bilous from the Edmonton Oil Kings. With those moves, the Raiders released 2000-born defenceman Lane Kirk and 2000-born goaltender Donovan Buskey. Both will join their respective Junior A clubs.

BREAKING THROUGH: Jeremy Masella snapped a 29-game goalless drought on Wednesday night with his second-period tally. His last goal came against the Calgary Hitmen on Oct. 16. The goal was also his first point in 13 games, dating back to an assist on Dec. 1 against the Regina Pats. The Phoenix, AZ product has a pair of goals to go along with eight assists in 41 games played this season.

TOP PROSPECTS GAME: The rosters for the 2019 Sherwin-Williams CHL/NHL Top Prospects Game were announced on Wednesday. Winger Brett Leason found out he is suiting up for Team Orr after the 40 prospects were divided into teams by NHL Central Scouting. Leason joins by Head Coach Marc Habscheid on the bench for Team Orr.

NEXT UP: The Raiders are back in action tomorrow night when they host the Calgary Hitmen (20-16-3-1) for the Second Annual Sock Hop Presented By Parkland Ambulance. Fans are asked to bring new pairs of socks for donation to Parkland Ambulance with a chance to win a new TV. It’s the Raiders’ final home before their six-game road trip through the BC Division and the Kootenay ICE. Both games begin at 7 p.m. Get tickets on raiderhockey.com and the Raider Office.