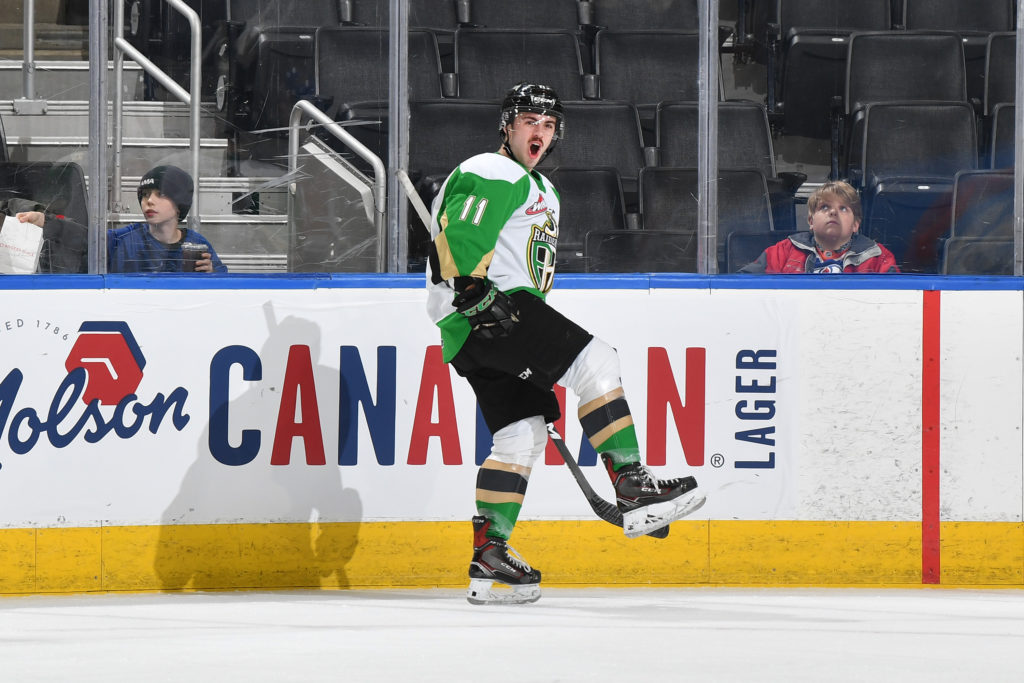 Edmonton, AB – Spencer Moe and Ozzy Wiesblatt each had two goals and an assist as the Prince Albert Raiders (12-2-3-0) picked up a 6-3 win over the Edmonton Oil Kings (12-2-3-0) at Rogers Place on Tuesday night.

Brayden Watts led the team in points for the game with a goal and three assists. Linemate Aliaksei Protas chipped in a pair of assists to keep him in the lead of WHL scoring with 28 points.

Edmonton got on the board first with their power play. The Oil Kings worked the puck to Matthew Robertson at the point. His shot got through a screen in front of Boston Bilous for his fourth of the season, putting the Oil Kings up 1-0 5:58 into the game.

Midway through the first, the Raiders got the goal back. Moe got the puck in the slot. Instead of shooting, he saw Watts crossing the face of the goal and connected with a pass. Watts made a forehand-to-backhand deke and beat Todd Scott for his eighth of the season to tie it at 1-1 with 8:54 to play in the opening frame.

SCORES! @brayden_watts29 takes the pass from Spencer Moe for his eighth of the year.

Just before the end of the period, the Raiders took the lead. Moe took a pass from Watts in the neutral zone and sped down the right wing to get past his defender. The Calgary product got the puck to his backhand and lifted it over Scott for his sixth goal of the year, extending his point streak to four games, and giving the Raiders a 2-1 lead after the first period.

SCORES! @spencerm04 is on fire! He turns on the jets to give us the lead.

The Raiders didn’t waste much time in the second period extending their lead. Just 1:26 into the middle frame, Landon Kosior made a great lead pass to Eric Pearce. The Regina product’s shot on goal was stopped by Scott, but Wiesblatt followed up the play and put the rebound past the Oil Kings goaltender for his fifth of the year to make it 3-1 game.

At the 5:04 mark of the second, Ilya Usau gave the Raiders a four-goal lead. Justin Nachbaur took a step into the slot and put a shot on goal that was turned aside by Scott. The rebound found the stick of Usau and the rookie banged it home for his seventh of the season.

The goal ended Scott’s night for the Oil Kings. The goaltender made 11 saves in just more than 25 minutes of action.

The Raiders added another midway through the frame on the power play. Wiesblatt received a pass at the side of the net from Aliaksei Protas at the point. The 2020 NHL Draft prospect fired a quick shot that beat backup goaltender Sebastian Cossa for his second of the contest and sixth of the year.

SCORES! @ozzywiesblatt gets his second of the game, this time on the power play!

In the third, the Oil Kings cut into the lead at the 5:45 mark. Keagan Slaney’s shot from the point went off a Raider in the slot, changing the direction to get it past Bilous. It was Slaney’s first goal of his WHL career, making it a 5-2 game.

The Raiders got their four-goal lead back three minutes later. Watts dropped a pass for Protas in the slot, but the Washington Capitals prospect was denied by Cossa. Moe followed up the play and roofed the rebound over the Oil Kings netminder for his second of the game and seventh of the year.

SCORES! @spencerm04 follows up the play for his second of the night!

Edmonton responded with 8:36 to play in the game. A miscommunication in the Raiders’ end left Ethan McIndoe alone in the slot, but his shot went wide. The puck found Liam Keeler who potted the rebound for his sixth of the year, making it 6-3.

Late in the third, Bilous made a great save to preserve the three-goal lead. Riley Sawchuk received a cross-crease pass, but Bilous slid over to rob the overage forward with his glove with 3:55 to play in the game.

That save was the best of the night for Bilous, who made 17 saves for the win against his former team. Cossa made 13 saves in relief for the Oil Kings.

Up next for the Raiders is a trip to Calgary tomorrow night to take on the Hitmen at the Scotiabank Saddledome to wrap up the quick trip through Alberta. Puck drop is 8 p.m. Catch the game at The Rock And Iron Sports Bar, or listen on 900 CKBI with Trevor Redden.

The next Raiders’ home game is on Friday, November 8 when the Brandon Wheat Kings (8-10-0-0) make their first trip to the Art Hauser Centre. Puck drop is 7 p.m. Tickets are available at the Raiders Office and online here.