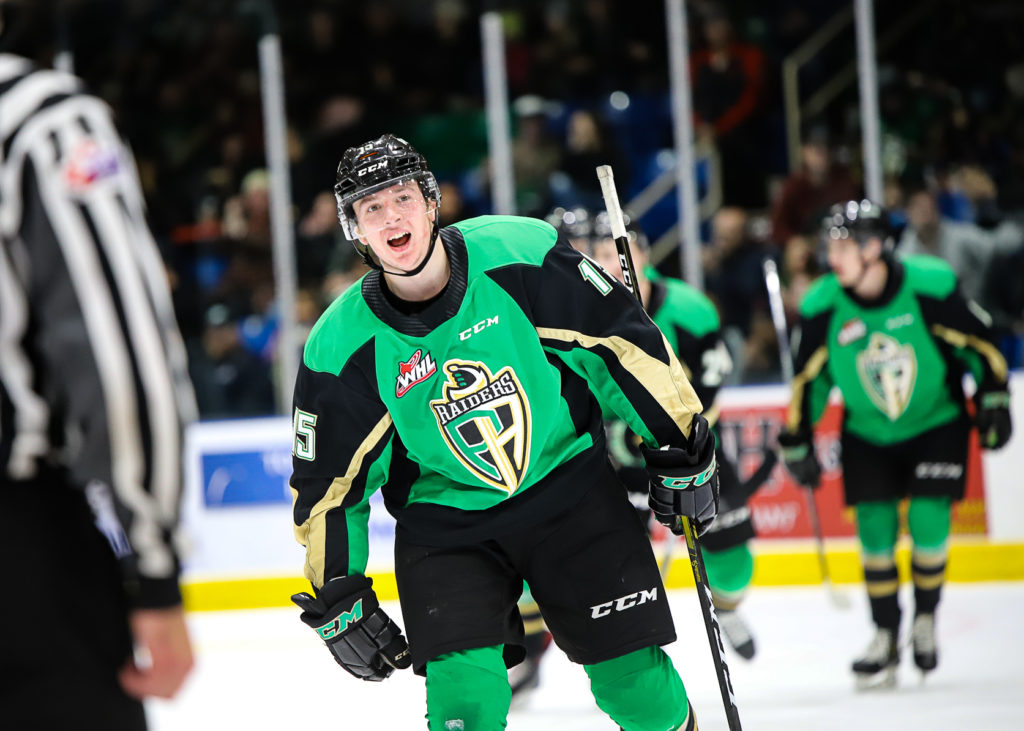 This week, the Raiders play four games in five nights beginning on Tuesday in Edmonton at Rogers Place against the WHL-leading Oil Kings (12-1-3-0). Last season, the Raiders won the season series 3-1-0-0 and won the best-of-seven Eastern Conference Championship four games to two against the Oil Kings. Tuesday’s game is an 8 p.m. CT puck drop.

On Wednesday, the Raiders complete their Alberta excursion at the Scotiabank Saddledome against the Calgary Hitmen (8-5-1-0). The Raiders are coming off a 2018-19 season series sweep of the Hitmen last season, outscoring Calgary 27-9 in the four-game set. Wednesday’s game starts at 8 p.m. CT.

Head to The Rock And Iron Sports Bar to watch both games, or listen to Trevor Redden’s call on 900 CKBI.

The Raiders return to the Art Hauser Centre for a pair of weekend games on Friday and Saturday nights. Friday sees the Brandon Wheat Kings (7-10-0-0) come to Prince Albert for the first of six contests between the teams this year. Last year, the Raiders took the season series by winning four of the six games.

On Saturday, the Red Deer Rebels (5-8-0-2) make their first trip to the Art Hauser Centre since the first round of last year’s WHL Playoffs. The Raiders are coming off a 3-1-0-0 season series win and a four-game sweep of the Rebels in the postseason.

Both home games start at 7 p.m. Tickets are available at the Raiders Office and online here.

Last week, the Raiders won both of their games against a pair of division rivals. On Friday, they knocked off the Regina Pats 6-3 at the Art Hause Centre. They followed up the performance with a 5-1 win over the Warriors in Moose Jaw on Saturday.

Elsewhere, Nolan Allan and Canada Red got off to a good start that the 2019 World Under-17 Hockey Challenge by skating to a 4-3 victory over Russia on Saturday night. Canada Red is back in action tonight against Sweden before closing out the round robin on Tuesday against Finland.

The knockout stage begins of the eight-team tournament begins on Thursday. Keep up-to-date with the 2019 World Under-17 Hockey Challenge here.