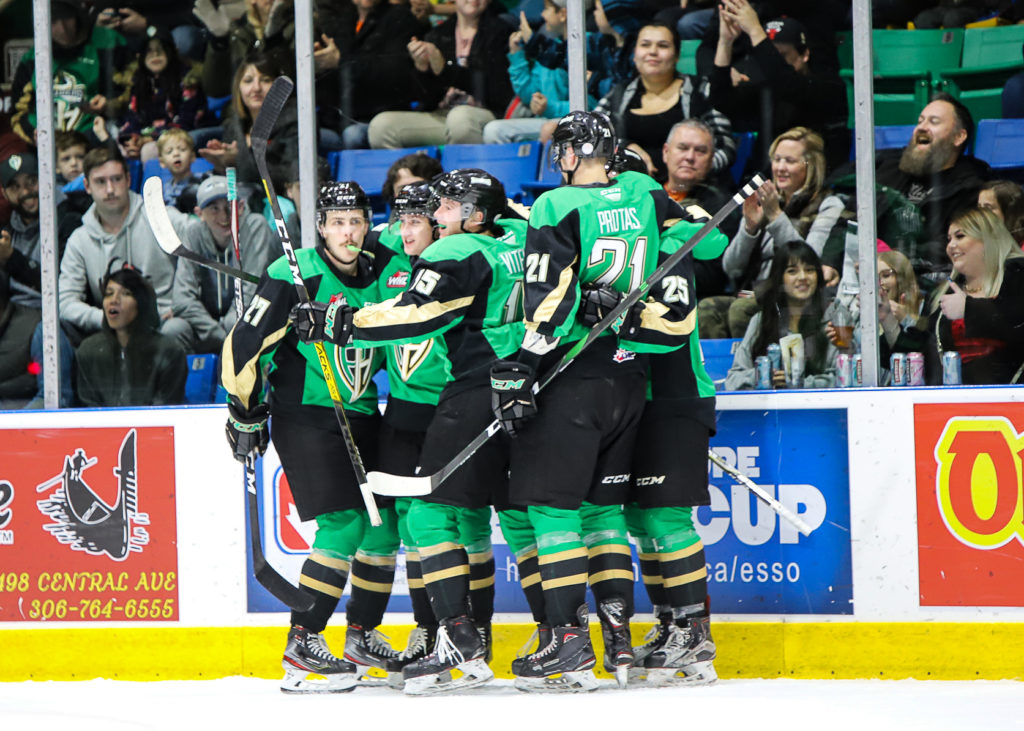 Spencer Moe had two goals and two assists in the game to lead all scorers. Aliaksei Protas (one goal, two assists) and Ilya Usau (three assists) had three-point nights. Brayden Watts and Ozzy Wiesblatt also each recorded a goal and an assist.

Following a first period that had no scoring, the Raiders got the first goal of the game. Moe chipped a pass over to Usau, who return the pick to Moe. The Calgary, AB product slowed up, dragged to his backhand to avoid goaltender Max Paddock and put the puck in the net for his third goal of the season.

🎥 WHL Highlight of the Night 🎥
November 1, 2019 @spencerm04 of @PARaidersHockey#WHLHoN pic.twitter.com/48o8wE1uzL

About five minutes later, the Pats tied it up. Drew Englot recovered a puck in the corner and threw it towards the front of the net. The puck deflected off the skate of a Raiders defender and past Boston Bilous to make it 1-1 at the 6:20 mark.

Late in the period, the Pats took their first lead of the contest. Carter Massier’s attempt on goal was stopped by Bilous, but the rebound stayed in front of the goal. Logan Nijhoff skated into the play and chopped the puck over the goaltender’s glove for his third of the year, putting the Pats up 2-1 after 20 minutes.

Five minutes in the third, the Raiders thought they tied the game. Paddock stopped the initial shot, but played the rebound into the slot. The puck went off Protas’ skate and past Paddock. However, after review, it was deemed he kicked the puck in.

Shortly after, the Raiders got their tying goal. Protas put a shot on goal that was stopped by Paddock, but the rebound went to Wiesblatt on the wing and the 2020 NHL Draft prospect buried his fourth goal of the year to even the score at 2-2.

The Raiders regained their lead at the 9:05 mark of the period. Wiesblatt sent a pass towards Reece Vitelli in front of the net, who redirected it past Paddock for his first as a Raider to make it a 3-2 game.

Two minutes later, the Raiders doubled their lead. Kaiden Guhle sent the puck ahead to Protas, who dished it to Moe. He gave it right back to Protas, who deked to his backhand and slipped it through Paddock to give the Raiders a 4-2 lead with his 10th goal of the year.

Brayden Watts made it a three-goal game about 90 seconds later. The overager worked in from the corner and banked a shot in off Paddock from behind the goal line for this sixth of the year.

The Pats cut into the lead again with 2:27 to play in the game. Ryker Evans’ shot was stopped by Bilous, but Nijhoff was at the top of the crease and banged home the rebound for his second of the game.

The Raiders ended the game 30 seconds later. Watts took a hit to clear the zone and Protas chipped the puck ahead to Moe, who found the empty net for his second of the game and fourth of the season, wrapping up the scoring at 6-3.

Bilous earned his ninth win of the year with a 23-save effort. Paddock stopped 35 shots in a losing effort.

The Raiders are back in action on Saturday night when they head to Moose Jaw to take on the Warriors (7-6-1-0) at Mosaic Place. Game time is 7 p.m. Catch the game at The Rock And Iron Sports Bar, or listen o XFM 101.5

The next Raiders’ home game is on Friday, November 8 when the Brandon Wheat Kings (7-9-0-0) make their first trip to the Art Hauser Centre. Puck drop is 7 p.m. Tickets are available at the Raiders Office and online here.