Raiders Open 2019 With A Win In Regina 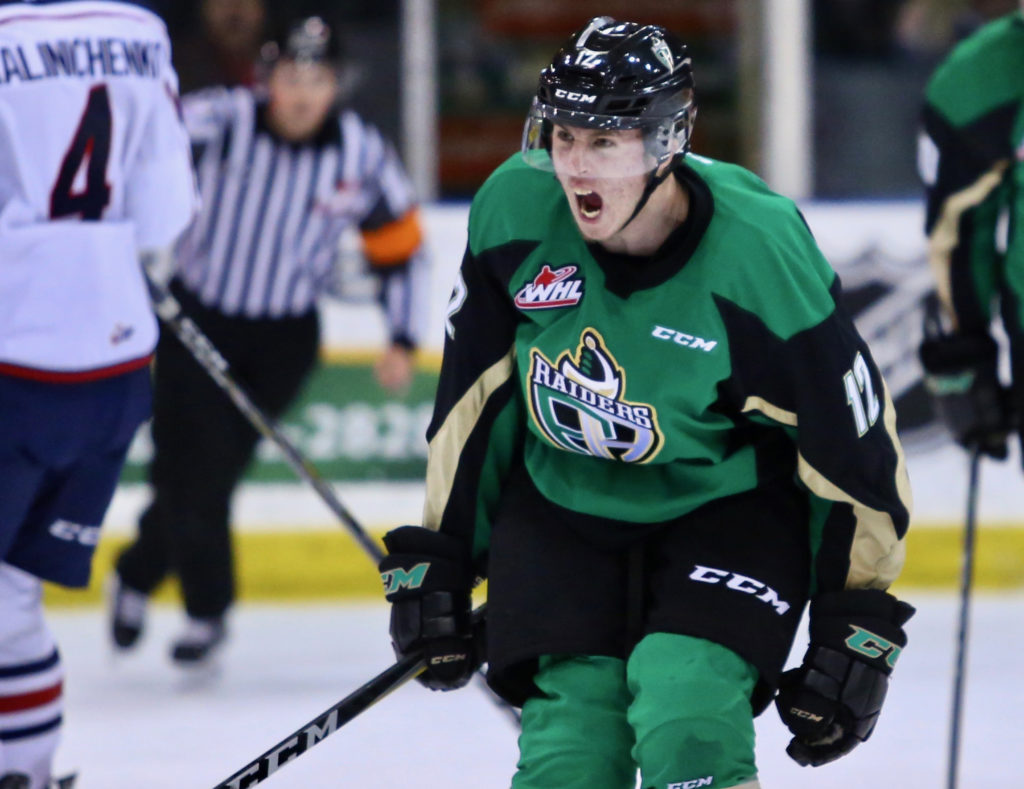 Sean Montgomery had the game-tying goal in the third and added two assists. Parker Kelly chipped in a pair of goals and an assist. Cole Fonstad added a goal and an assist. Noah Gregor had his six-game goal streak snapped, but assisted on three.

The Raiders continued their dominating play against the Pats in the first period. The visitors fired 18 shots on Max Paddock, but the Pats goaltender was up to the challenge and turned aside all of them.

In the second, the Raiders broke through 19 seconds into the frame with a shorthanded goal. Brett Balas – making his first career start – played the puck up the board and past the Pat on the point. That put Montgomery and Kelly on a shorthanded two-on-one. Montgomery fed the Ottawa Senators prospect who one-timed a shot past Paddock to put the Raiders up 1-0.

With 5:14 left in the second, Balas made his first big stop. After a Raider lost his footing at the blue line, Duncan Pierce had a shorthanded breakaway. However, Balas got his leg down and held the post to keep the rebound out.

What a stop by Brett Balas!

However, the Pats tied the game before the end of the period. Robbie Holmes was sent in on a partial breakaway and snapped a shot through Balas’ five-hole to make it a 1-1 game after 40 minutes.

The Raiders restored their lead early in the third. On a power play, Fonstad finished off a tic-tac-toe passing play from Montgomery and Gregor 4:04 into the period.

SCORES! @ColeFonstad finishes off a tic-tac-toe passing play on the power play!

Just 14 seconds later, the Pats re-tied the game. Liam Schioler’s shot from the left point beat a screened Balas to level the score at 2-2.

Less than two minutes later, the Pats took their first lead of the game. Riley Krane picked up a puck off the boards and fired a quick shot on goal that fooled Balas to give Regina a 3-2 lead 5:40 into the third.

Right after the media timeout, the Raiders tied it up. Following a great play by Kaiden Guhle to keep the puck in the offensive zone, Ozzy Wiesblatt found Kelly in the slot. The Camrose, AB product slid a pass over to Montgomery, who one-timed it past Paddock to make it 3-3 with 8:56 to play.

SCORES! Sean Montgomery ties it up!

The Raiders used their power play to take the lead again. Sergei Sapego stepped into a pass from Fonstad and snapped a shot through a Kelly screen and past Paddock with 4:21 to play. The play was briefly reviewed, but Kelly never made contact with Paddock and was outside of the blue paint.

SCORES! Sergei Sapego snipes through traffic on the power play!

Late in the frame, the Pats struggled to get their goalie pulled for the extra attacker. Once they did with less than 30 seconds to play, Kelly iced the game with an empty-net goal with one second to play.

Tonight’s Insurance Goal of the Game was scored by #27 Parker Kelly (@Parks_17)!

Balas made 20 saves to pick up his second career win in his first WHL start. Paddock stopped 51 shots in a losing effort for the Pats.

The Raiders return to the Art Hauser Centre on Friday night when the Moose Jaw Warriors (19-8-5-1) make their first trip to Prince Albert this season. Then, the Raiders host the Saskatoon Blades (22-11-5-0) on Saturday. Puck drop for both games is 7 p.m. Tickets are available at raiderhockey.com and the Raider Office.