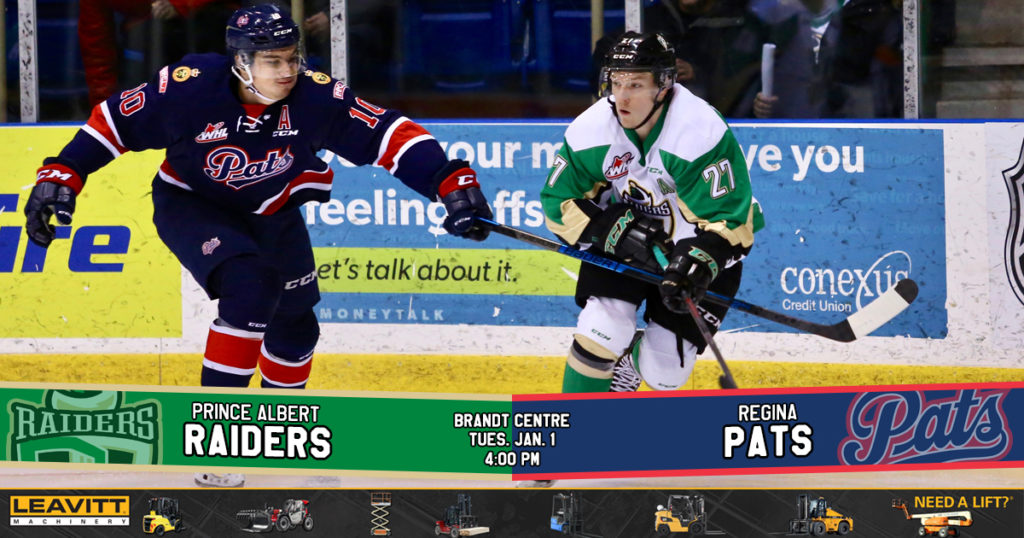 RAIDER REVIEW: The Raiders (33-3-0-1) ring in the New Year this afternoon at the Brandt Centre against the Regina Pats (12-24-0-1). On Sunday, the Raiders suffered their first defeat on home ice in a 2-1 loss to the Pats at the Art Hauser Centre. Dean McNabb made 43 saves in the win for the Pats. Noah Gregor scored the Raiders’ lone goal in defeat. Donovan Buskey stopped 11 shots between the pipes in his first loss as a Raider.

VS. REGINA: This is the sixth and final time the Raiders and Pats will go toe to toe in the regular season. The Raiders have won both meetings between the two teams in Regina this season and lead the season series 4-1-0-0.

YEAR IN REVIEW: The Prince Albert Raiders said goodbye to 2018 on Sunday night with their final game of the year. Over the year, the Raiders finished with a 53-13-3-3 record in 72 regular season games and a plus-120 goal differential. Brett Leason led the team with 38 goals and 48 assists in 67 games.

GREGOR ON FIRE: With a goal on Sunday night, Noah Gregor extended his goal-scoring streak to a career high of six consecutive games. Over those six games, Gregor has 10 goals and four assists for 14 points. The goal was the San Jose Sharks prospect’s 50th point of the season. The Beaumont, AB product has reached the 50-point plateau for the fourth consecutive season. For his recent play, Gregor was named the WHL On The Run Player of the Week on Monday.

WORLD JUNIORS WATCH: Brett Leason was held off the scoresheet in Team Canada’s 2-1 loss to Russia on Monday night at the World Junior Championship in Vancouver. Leason, Ian Scott, and Canada finished the group stage in second place with a 3-1 record. Canada will take on the third-place team from Group B on Wednesday in the quarter-finals.

NEXT UP: The Raiders are back at the Art Hauser Centre on Friday night as the Moose Jaw Warriors (19-8-5-1) make their first trip to Prince Albert this season. Then on Saturday, the Saskatoon Blades (22-11-5-0) visit the Art Hauser Centre. Both games begin at 7 p.m. Tickets are available at raiderhockey.com and the Raider Office.