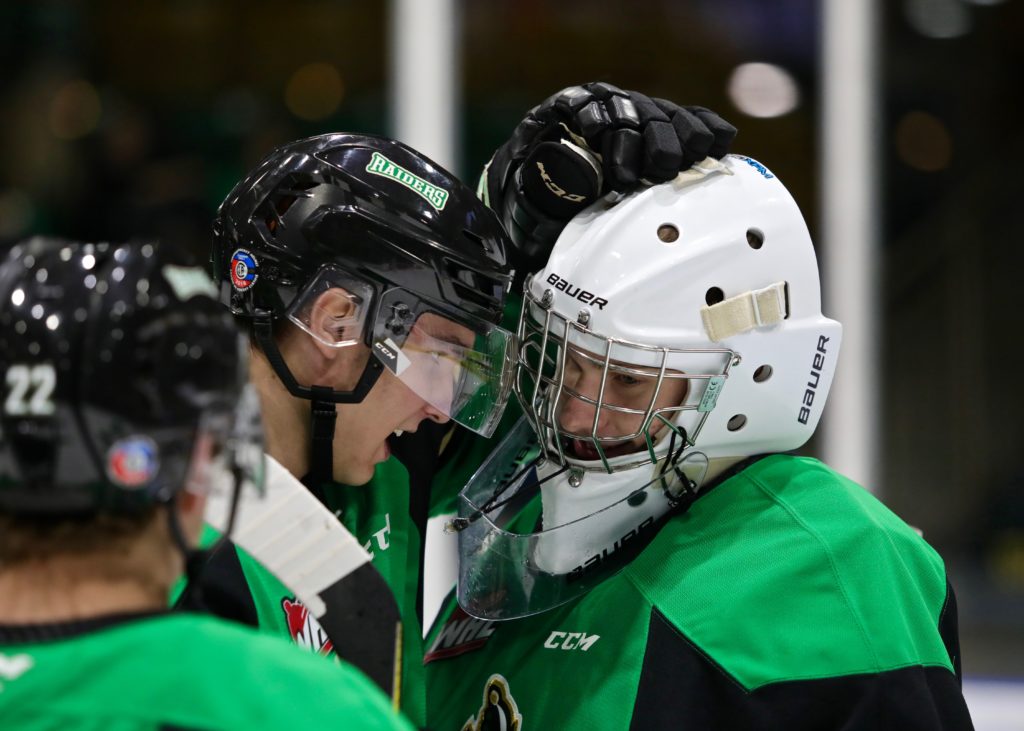 Prince Albert, SK – Aliaksei Protas had three points and Carter Serhyenko picked up his first career win in as many starts as the Prince Albert Raiders (5-0-2-0) doubled up the Vancouver Giants (4-4-0-0) 4-2 on Tuesday night at the Art Hauser Centre.

In a rematch of last year’s 2019 Rogers WHL Championship Series, Protas led the way with a goal and two assists. He factored in on the final three goals of the contest.

Serhyenko earned his first career win with a 25-save performance against the reigning Western Conference Champions.

The Raiders jumped out to an early advantage in the first period. Justin Nachbaur carried the puck over the Giants’ blueline and fired a low shot that beat goaltender David Tendeck for his second tally of the season. It was the first goal Tendeck allowed in more than eight consecutive periods of play.

Before the end of the first, the Giants tied it up. Justin Sourdiff entered the zone and as he did, Zack Hayes’ stick shattered in his hands as he leaned on it. That gave Sourdiff some space and the 2020 NHL Draft prospect snapped a shot past Serhyenko with 3:27 to play in the opening frame.

The score held until late in the second period. Jeremy Masella sprung Brayden Watts with a nice exit pass from the defensive zone. Watts, a former Giant, drove into the zone and saucered a pass to a streaking Protas through the slot. The Washington Capitals prospect put his shot upstairs on Tendeck to put the Raiders up 2-1 after two periods with his fourth goal of the year.

Early in the third, the Giants found an equalizer. Jackson Shepard was able to bank a shot off Serhyenko and past the goal line at the 3:50 mark. The Raiders netminder appeared to keep it out of the goal at ice level and the goal was waved off. After review, the call was changed to give Shepard his fourth of the season.

After killing off a penalty early in the period, the Raiders got a chance with a four-minute man advantage with 4:58 remaining. With just 1:28 to play, Kaiden Guhle’s point shot got through a screen in front and past Tendeck to put the Raiders ahead.

The Raiders iced the contest with an empty-net goal from Ilya Usau with approximately three seconds to play.

Tendeck made 22 saves in the loss for the Giants.

The Raiders are back in action on the weekend as they play their final two home games before heading out on their biennial US Division road trip. On Friday, the Raiders host the Lethbridge Hurricanes (3-2-0-1) followed by a matchup with the Moose Jaw Warriors (4-1-0-0) on Saturday.