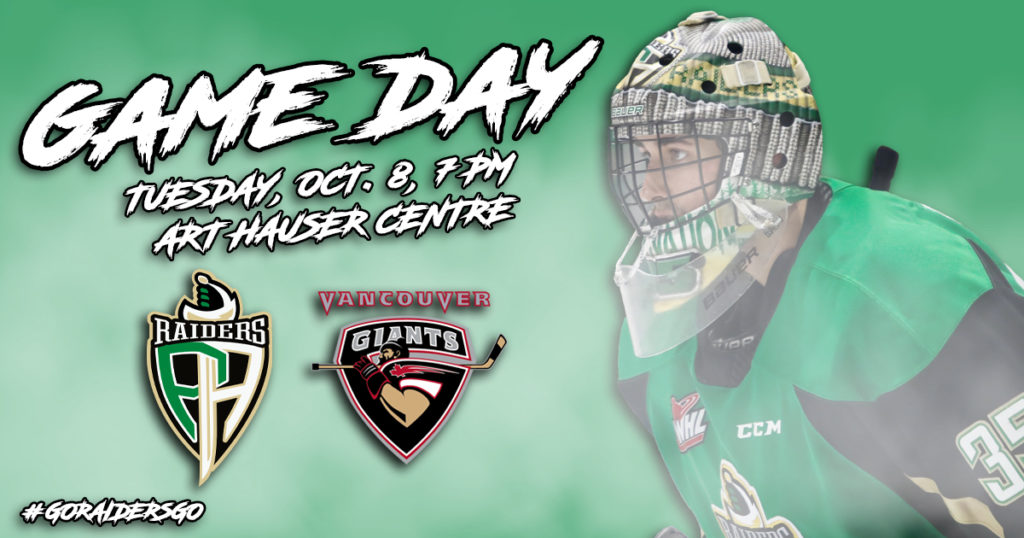 RAIDER REVIEW: The Raiders (4-0-2-0) welcome the Vancouver Giants (4-3-0-0) to the Art Hauser Centre. In their last outing, the Raiders shut out the Regina Pats 6-0. Kaiden Guhle had a career-best four-point night in the win. Jakob Brook, Zack Hayes, Brayden Watts, and Ozzy Wiesblatt also had multi-point nights. Boston Bilous picked up his second shutout of the year with a 13-save performance.

BRANCHING OUT: Tonight is the first time this season the Raiders will be play a team outside the East Division. Last year, the Raiders won 28 of their 34 games against the BC, Central, and US Divisions.

CAREER NIGHT: Speaking of Guhle, the blueliner from Sherwood Park, AB set a career high for assists (three) and points (four) in a game against the Pats on Saturday night. His offensive outburst raised Guhle to fourth on the team in scoring with five points this season.

ROSTER MOVES: The Raiders acquired 2001-born import forward Daniil Stepanov from the Moose Jaw Warriors on Saturday night. Stepanov, from Minsk, Belarus, had two assists in four games for the Warriors this season. In his rookie season last year, he dressed in all 68 games and totalled eight goals and 11 assists.

NEXT UP: The Raiders play the final two home games before heading out on their US road trip this weekend. On Friday, the Lethbridge Hurricanes (3-2-0-1) come to town, followed by a meeting with the Moose Jaw Warriors (4-1-0-0) on Saturday. Both games start at 7 p.m. at the Art Hauser Centre. Tickets are available at the Raiders Office and online here.