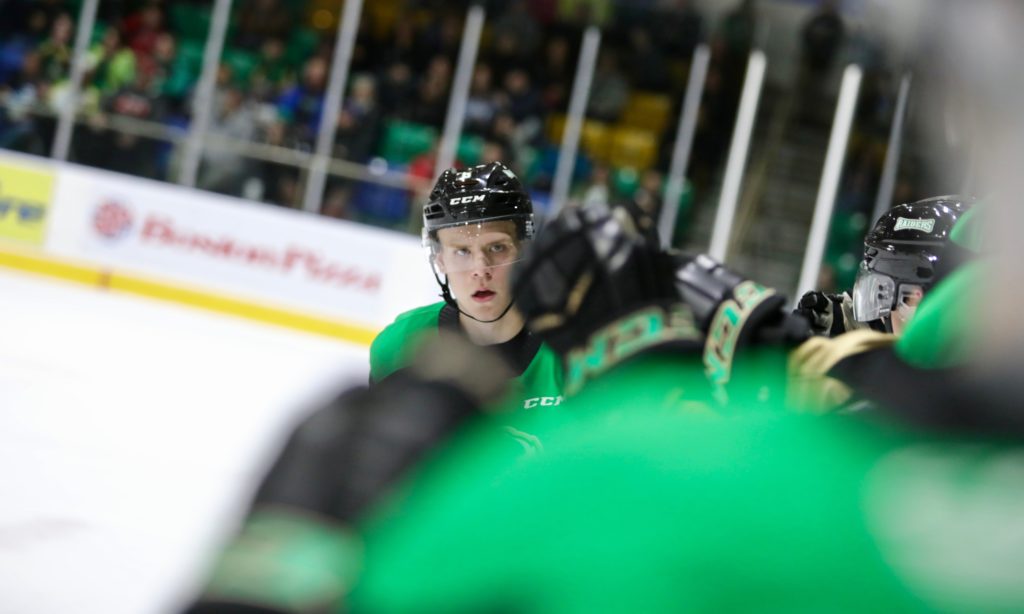 The three assists and four points are both career highs for the blueliner from Sherwood Park, AB. Zack Hayes, Brayden Watts, and Ozzy Wiesblatt each added a goal and an assist. Jakob Brook added a pair of assists as well.

Hayes got the scoring started 4:42 into the contest. His blast from the point beat Pats goaltender Danton Belluk for the overage defenceman’s first goal of the season

Before the end of the period, the Raiders doubled their lead. Eric Pearce pounced on a rebound off a Brook shot, kicked the puck up to himself, and batted it past Belluk for his first of the year with 7:39 to play in the opening frame.

Less than four minutes into the second, Wiesblatt added to the advantage. The subject of Saturday night’s bobblehead got a rebound in front of the net and lifted it over Belluk. The Pats goaltender reached back, but was unable to grab the puck before it crossed the line.

About two minutes later, Watts tallied his third of the season. He was left alone in front of Belluk and buried a rebound to make it a 4-0 game at the 5:33 mark of the second.

The Raiders added another with 7:29 to play in the middle frame. Guhle received a pass and skated into the slot and snapped a shot past Belluk for his first of the year. The goal ended Belluk’s night. The Pats netminder stopped 14 shots in his 32 minutes of action.

Late in the second, Justin Nachbaur rounded out the scoring. Guhle hit the Cross Lake, MB product with a stretch pass, sending him in on a breakaway. Nachbaur beat Max Paddock for his first of the year, making it a 6-0 contest.

Paddock shut the door the rest of the way for the Pats, finishing the game with 10 saves.

At the other end, Boston Bilous picked up his second shutout of the season by stopping 13 shots. It was also the Langley, BC product’s fourth win in six starts this season.

The Raiders are back in action on Tuesday night when the Vancouver Giants (4-3-0-0) visit the Art Hauser Centre for a WHL Championship rematch. Puck drop is 7 p.m. Tickets are available at the Raiders Office and online here.

On the weekend, the Raiders play their final two games before heading out on their biennial road trip through the U.S. Division. On Friday, the Lethbridge Hurricanes come to the Art Hauser Centre followed by a meeting with the Moose Jaw Warriors on Saturday. Both games start at 7 p.m.