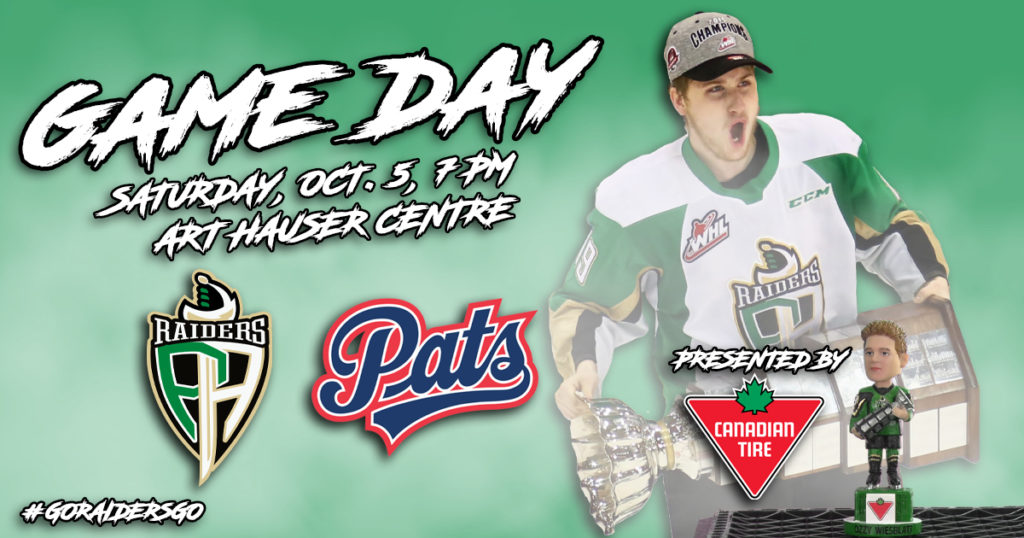 GET YOUR BOBBLEHEAD: There will be 2,000 Ozzy Wiesblatt bobbleheads for purchase by a minimum $2 donation in the Johnny Bower . The proceeds from the funds raised will be donated to Jumpstart Prince Albert. There is a limit of one bobblehead per person.

IN THE GOAL COLUMN: Ozzy Wiesblatt recorded his first goal of the season on Friday night, putting an end to a 12-game regular season goalless drought. His last regular season goal came on February 23 against the Brandon Wheat Kings. Wiesblatt is second on the team with six points (1g-5a).

STREAKING: The line of Aliaksei Protas, Brayden Watts, and Ozzy Wiesblatt has been clicking for the Raiders. Since coming together in Regina, the trio are on a three-game point streak after they connected for the Raiders’ lone goal on Friday. Wiesblatt is riding a three-game streak, Protas has points in five straight, and Watts leads the team with a six-game point streak that dates back to last season.

ZACK IS BACK: Defenceman Zack Hayes made his season debut on Friday night against the Blades. Hayes was most recently attending training camp with the San Diego Gulls, the AHL affiliate of the Anaheim Ducks.

EXTRA TIME: Fans at the Art Hauser Centre have been getting their money’s worth to start the season. All three of the Raiders home games this season have needed overtime, with the Raiders posting a 1-2 record in those contests.

NEXT UP: The Raiders continue their homestand on Tuesday night for a WHL Championship rematch against the Vancouver Giants. Puck drop is 7 p.m. Tickets are available at the Raiders Office and online here.