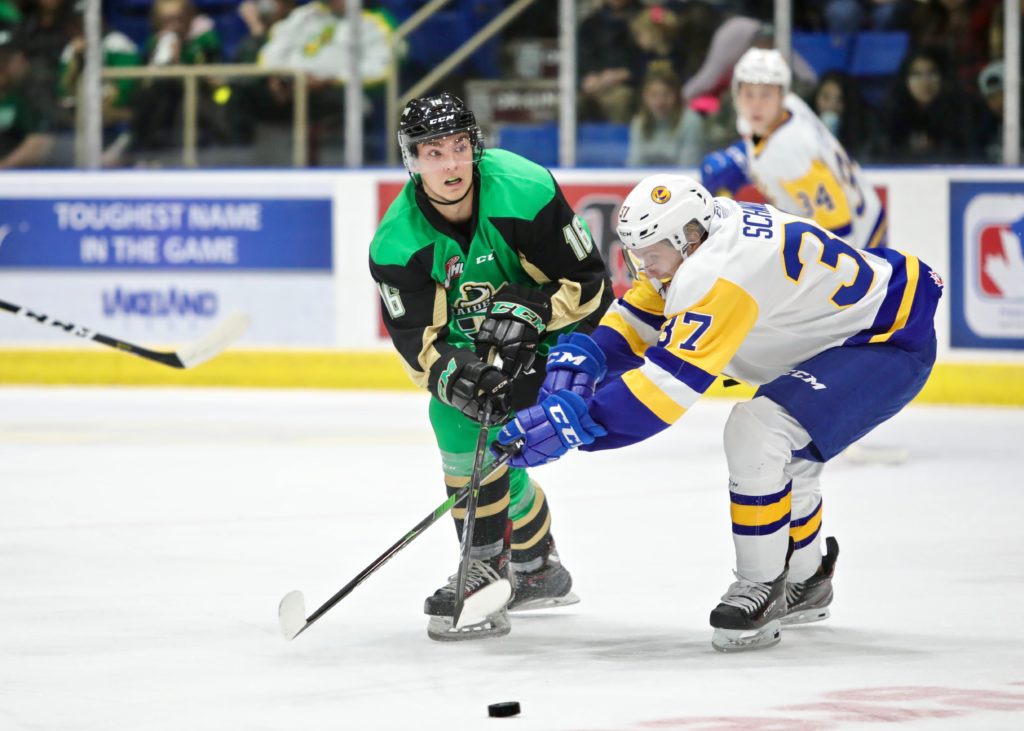 On Friday, the Raiders picked up a point in a 2-1 overtime loss to the Saskatoon Blades (3-3-0-0) at the Art Hauser Centre. Chase Wouters scored the overtime winner with 1:03 to play in the extra period.

Ozzy Wiesblatt opened the scoring 1:52 into the contest. Aliaksei Protas found the Calgary product behind the Blades’ defence in the slot and deked to his backhand for his first goal of the season.

Less than five minutes later, the Blades tied it up with a power-play goal. Aidan De La Gorgendiere’s shot from the point got through traffic in front of the goal and past Boston Bilous to make it a 1-1 game after 20 minutes.

After outshooting the Blades 14-7 in the opening period, the Raiders continued to pepper Saskatoon netminder Nolan Maier with shots. The Raiders put 16 shots on the Blades goaltender during the period, but were turned aside on every attempt.

Notably, Wiesblatt was denied as he tried to outwait Maier and bank a shot off his back. Then, Guhle put a shot on goal on a rush and was stopped, found his own rebound, but Maier was able to kick out the pad. Wiesblatt also beat Maier in the period, but hit the post.

In the third, the Raiders were able to kill of two penalties, including one in the final two minutes of the period.

Wiesblatt and Protas both had quality chances to end the game in overtime. Wiesblatt entered the zone with speed, skated across the ice, and slid a shot past the post early in the extra period. Later, Wiesblatt got into the slot and dropped a pass for Protas, but Maier swallowed up the shot by the Washington Capitals draft pick.

Wouters ended the game when he got behind the Raiders defence at the blueline. Riley McKay chipped a pass over to the Blades captain and Wouters snapped his shot past Bilous to end the game.

Bilous finished the game with 20 saves for the Raiders. Maier stopped 36 shots for the Blades in the win.

Up next for the Raiders is the Regina Pats (1-4-0-0) on Ozzy Wiesblatt Bobblehead Night Presented By Canadian Tire on Saturday at the Art Hauser Centre. Get your bobblehead with a minimum $2 donation. Proceeds from the bobblehead will be donated to Jumpstart Prince Albert. Puck drop is 7 p.m. Tickets are available online here and at the Raiders Office.