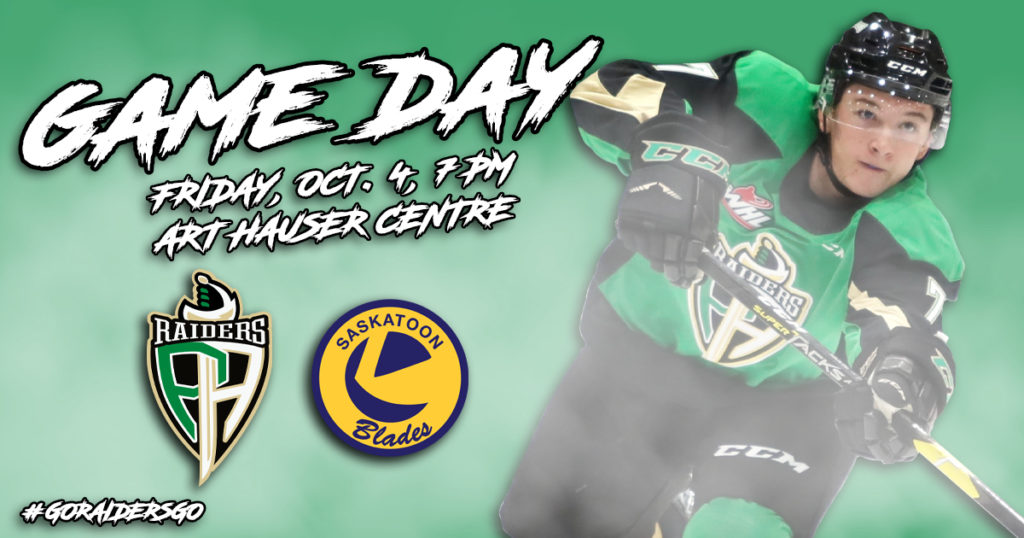 RAIDER REVIEW: The Raiders (3-0-1-0) welcome the Saskatoon Blades (2-3-0-0) to the Art Hauser Centre for the second time this season. On Saturday night, the Raiders edged the Winnipeg ICE 3-2 in overtime. Aliaksei Protas had a goal and an assist, while Ilya Usau also scored in regulation. Jeremy Masella picked up the overtime winner 2:02 into the extra frame. Boston Bilous picked up his third-straight win by stopping 16 shots.

DIESEL POWERED: Jeremy Masella scored his first regular-season goal in 30 games. His last tally was on January 9 against the Seattle Thunderbirds. It was also the blueliner from Phoenix’s second career game-winning goal and first in overtime.

ON THE BOARD: Centreman Ilya Usau recorded the first point of his WHL career with a goal on Saturday night against the Winnipeg ICE.

MAKING THE CUT: Raiders prospects Graydon Gotaas (Alberta) and Bryce Warkentine (Manitoba were named to their respective province’s teams for the 2019 WHL Cup. The tournament begins on October 23 in Calgary.

ROSTER NEWS:  On Tuesday, the Raiders traded 2002-born forward Cohner Saleski to the Red Deer Rebels in exchange for two selections in the WHL Bantam Draft. Sasleki, a Saskatoon product, had not dressed for the Raiders this season. He played five career games with the Raiders, registering an assist.

NEXT UP: The Raiders host the Regina Pats (1-3-0-0) as their homestand continues on Saturday. The night is also Ozzy Wiesblatt Bobblehead Night Presented By Canadian Tire. Fans can get their bobblehead for a minimum $2 donation with a limit of one bobblehead per person. Proceeds from the sales will be donated to Jumpstart Prince Albert. Tickets are available at the Raiders Office and online here.