Raiders Wrap Up US Road Trip With Win Over Chiefs 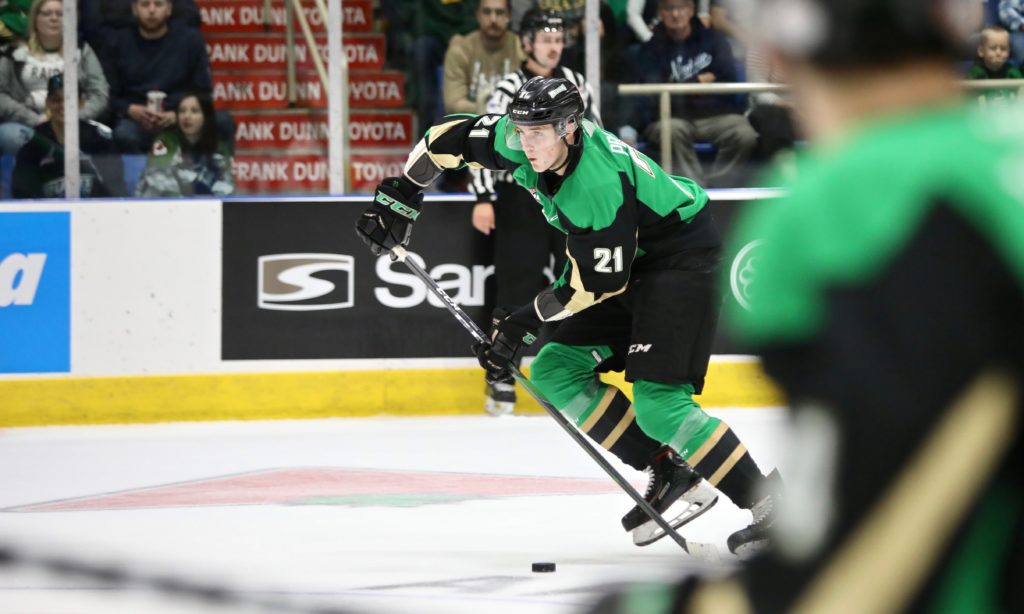 Spokane, WA – Aliaksei Protas had a pair of goals as the Prince Albert Raiders (9-2-3-0) ended their US Division road trip with a 4-1 win over the Spokane Chiefs (6-6-1-0) on Saturday at the Spokane Veterans Memorial Arena.

The Raiders finished their road trip and season series with the US Division teams with a 2-2-1-0 record. Landon Kosior and Ilya Usau also scored in the win for the Raiders.

Midway through the first, the Raiders opened the scoring for the second consecutive contest. Ozzy Wiesblatt carried the puck into the zone and faded into the corner, drawing the defence to him. The Calgary product saucered a pass to the centre of the zone to hit Kosior. The rookie from Regina stepped into a shot and snapped it past Campbell Arnold at the 9:41 mark.

About three minutes later, the Chiefs tied it. Luke Toporowski drove to the corner and found a cutting Bear Hughes who one-touched the pass past Boston Bilous to make it 1-1.

Late in the period, the Raiders restored their lead. With the Chiefs on the power play and trying to enter the zone, Protas turned them back twice and skated into the loose puck. The Washington Capitals draft pick made a quick move with his forehand and beat Arnold to give the Raiders a 2-1 advantage after 20 minutes.

Protas forces two turnovers as Spokane tries to gain the zone, goes the other way, and gets his eighth of the year.#GoRaidersGo #SPOvsPA pic.twitter.com/dSKftFrLwu

After a scoreless second, the Raiders put the game away with two quick goals in the third period.

Protas made it 3-1 with this second of the contest. He cut through the neutral zone, deked to his left and let a shot go from the faceoff circle that beat Arnold on his far side for his ninth goal of the year.

Protas cuts through the zone and snaps home his second of the game.#GoRaidersGo #SPOvsPA pic.twitter.com/koUiEha2VB

Nineteen seconds later, the Raiders were back in the Chiefs’ zone on a partial two-on-one rush. Spencer Me sent a pass over to Usau who opened up his stance to receive the pass and one-timed it past a sliding Arnold for his sixth of the season.

Spencer Moe sets up Usau on the two-on-one for Usau’s sixth goal of the season.#GoRaidersGo #SPOvsPA pic.twitter.com/xWebO9zbIa

That was the end of the night for Arnold, who made 15 saves in 43 minutes of play. Former Raider Brett Balas came in for the remainder of the game for the Chiefs, stopping all seven shots faced.

Bilous capped off the US road trip with a 21-save performance for his eighth win of the season, which is tied for first among WHL goaltenders.

The Raiders return to the Art Hauser Centre for a game against the Regina Pats on Friday night. Puck drop is 7 p.m. Tickets are available at the Raiders Office and at raiderhockey.com.