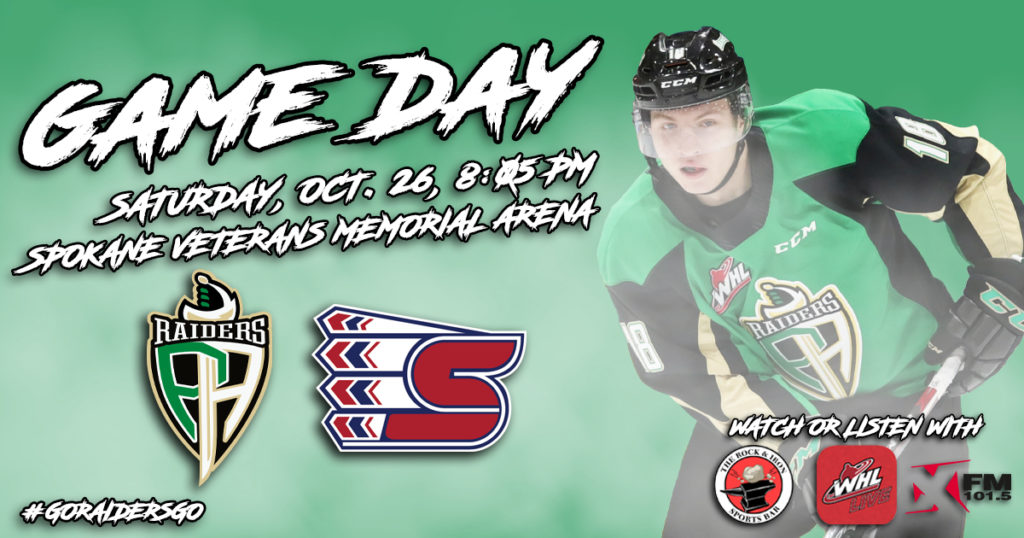 RAIDER REVIEW: The Raiders (8-2-3-0) wrap up their US Division road trip tonight in Spokane against the Chiefs (6-5-1-0). Last night in Kennewick, WA, the Raiders downed the Tri-City Americans 3-2 in a shootout. Tyson Laventure and Aliaksei Protas scored in regulation for the Raiders. Ilya Usau scored the lone goal of the shootout. Boston Bilous stopped 25 shots and all three of the Americans’ shooters.

TAKING SHOTS: It was the Raiders’ first trip to the shootout of the season on Friday night. The last time a Raiders game needed a shootout was on March 1, 2019 against Red Deer. The Raiders won 2-1 with Dante Hannoun netting the shootout winner.

SHOOTOUT FIRSTS:  Friday night marked the first career win in a shootout for Boston Bilous. In his career, the netminder from Langley, BC has stopped five of the six shootout attempts he has faced. It was also the first shootout attempts for both Aliaksei Protas and Ilya Usau on Friday.

ON THE BOARD: The Raiders got the game’s opening goal on Friday night, snapping a four-game streak of giving up the game’s first tally. When scoring first this season, the Raiders have posted a 6-0-2-0 record.

EXTRA HOCKEY: Friday night marked the fifth time this season the Raiders have had a game go into overtime. That is tied with the Swift Current Broncos for the league lead. In those five games, the Raiders have one overtime win, one shootout win, and three overtime losses. The Raiders’ five overtime appearances this season ties the number of times they went to the extra frame last season.

DISHING: Ozzy Wiesblatt picked up his 11th assist of the season on Friday night, which ties him for the lead among 2002-born players. The 2020 NHL Draft eligible forward has three goals to go along with his assists for 14 points on the season.

NEXT UP: The Raiders return to the Art Hauser Centre on Friday night to take on the Regina Pats. Puck drop is 7 p.m. Tickets are available at the Raiders Office and online here.