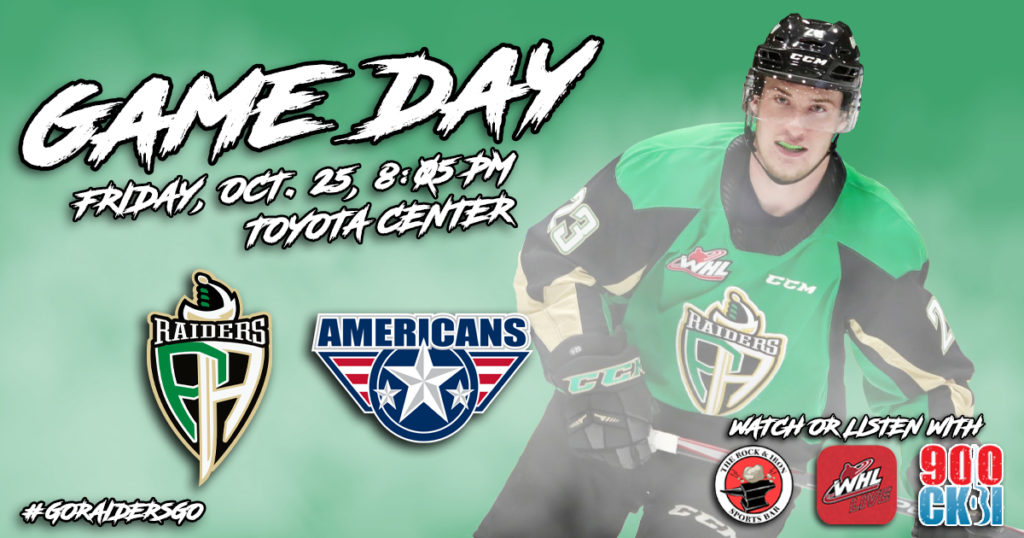 RAIDER REVIEW: The Raiders (7-2-3-0) head to Kennewick, WA to take on the Tri-City Americans (6-5-0-0) tonight at the Toyota Center. On Wednesday, the Raiders dropped a 4-3 game to the Winterhawks in Portland. Jakob Brook, Tyson Laventure, and Jeremy Masella all scored for the Raiders in the loss. Boston Bilous started the game and made 15 saves. Carter Serhyenko stopped eight shots in relief.

IN KENNEWICK: The Raiders have won two of their last three trips to Kennewick, WA to take on the Tri-City Americans. Their last victory at the Toyota Center was a 5-3 win on Oct. 14, 2015.

ON THE BOARD: Rookie Tyson Laventure scored his first career WHL goal and point in his 10th career game on Wednesday night in Portland. The second-round pick in the 2018 WHL Bantam Draft also led all Raiders with four shots on goal on Wednesday.

RAIDERS FIRST: Forward Reece Vitelli picked up his first point as a Raider with an assist on Jakob Brook’s goal on Wednesday. Vitelli now has four assists on the season in 11 games played between the Raiders and the Everett Silvertips.

FINDING OFFENCE: With a goal on Wednesday, Jeremy Masella matched his goal total of two from last season. The defenceman’s career high for goals in a season is four, which was set in 2017-18.

IN THE RANKINGS: On Wednesday, the Raiders were ranked fourth in the Kia CHL Top 10. This is the third consecutive week the Raiders have been ranked in the Top 10 and fourth when including honourable mentions.

NEXT UP: The Raiders conclude their US Division road trip tomorrow night in Spokane against the Chiefs. Game time is 8:05 p.m. The Raiders return home on Friday, November 1 against the Regina Pats. Tickets are available at the Raiders Office and online here.