Raiders Edged By Winterhawks in Portland 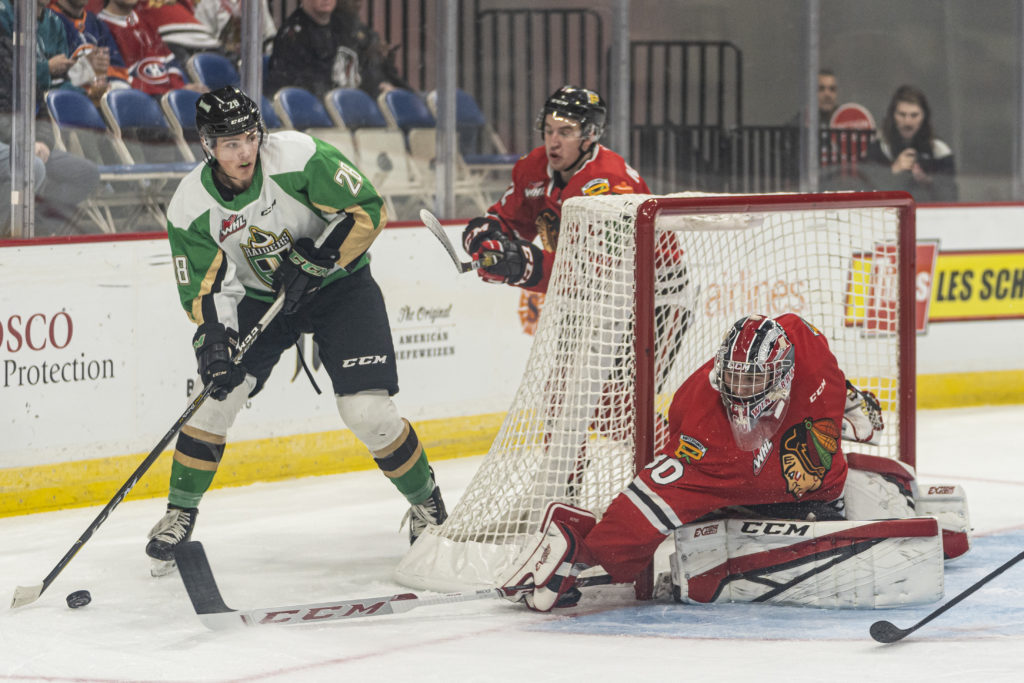 Portland, OR – The Prince Albert Raiders (7-2-3-0) weren’t able to erase a two-goal first period deficit on Wednesday night, dropping a 4-3 game to Portland Winterhawks (7-3-0-1) at the Veterans Memorial Coliseum.

Jakob Brook, Jeremy Masella, and Tyson Laventure were the goal scorers for the Raiders on the evening. Reece Newkirk factored in on all four of Portland’s goals, finishing with two goals and two assists.

Portland opened the scoring on its first of two power-play opportunities of the opening period. Just 12 seconds into the man advantage, Newkirk’s shot from the right faceoff circle got through Boston Bilous to put the Winterhawks up 1-0.

The Raiders were able to get some momentum back with a couple of power-play opportunities, including six shots on goal on their first man advantage.

Just as the Raiders’ second power play of the period came to an end, the Winterhawks extended the lead. Newkirk forced a turnover in the offensive end and found Seth Jarvis alone in the slot. Jarvis deked to his backhand and lifted his shot over a sprawling Bilous to give Portland a 2-0 advantage after 20 minutes.

At the 8:04 mark of the middle frame, the Raiders got on the board. Reece Vitelli forced a turnover behind the Winterhawks’ net. Vitelli skated behind the net and found Brook in front of the net. Brook took the pass and snapped a shot past Joel Hofer for his first goal of the season, cutting Portland’s lead to 2-1.

SCORES! @BrookJakob gets his first goal of the year! @reecevitelli9 sets it up for his first point as a Raider!

Less than two minutes later, the Winterhawks restored their two-goal advantage with their second power-play goal of the night. Ten seconds into their power play, Newkirk put a pass to the front of the net. The pass went off Jake Gricius’ foot and through Bilous to give Portland a 3-1 lead.

That goal ended Bilous’ night. The Raiders netminder made 14 saves in just less than 30 minutes of action.

About four minutes into the third, the Raiders cut the lead down to one again. Aliaksei Protas and Brayden Watts were sprung on a two-on-one rush by Spencer Moe. Protas’ pass to Watts was knocked away, but found the stick of Masella in the slot. The overage defenceman rifled a shot past Hofer for his third of the year, making it a 3-2 game with 16:01 to play.

SCORES! @jeremy_masella pounces on a puck in the slot!

The Raiders kept applying pressure, but were unable to find the equalizer. Ozzy Wiesblatt had two separate chances from the slot, but his attempts on goal went just over the cross bar.

Late in the period, the Newkirk wrapped up his four-point night with an empty-net marker to make it 4-2 with 42 seconds to play.

Before the final whistle, the Raiders got the game back within one. Laventure worked a nice give-and-go play with Eric Pearce and the rookie from Lloydminster, AB buried his first career WHL goal with less 10 seconds to play.

It was as close as the Raiders came on the evening as they weren’t able to get the puck back into the Winterhawks’ end before time expired.

In relief, Carter Serhyenko stopped all nine shots he faced in approximately 30 minutes of action. Hofer made 25 saves to pick up the win.

The Raiders hit the final weekend of their US Division road trip, beginning on Friday night in Kennewick, WA against the Tri-City Americans. On Saturday, the Raiders conclude the trip in Spokane against the Chiefs.

Both games begin at 8:05 p.m. Head to The Rock And Iron Sports Bar to watch the game. Friday’s game will be broadcasted on 900 CKBI, while Saturday’s game can be heard on 101.5 XFM.