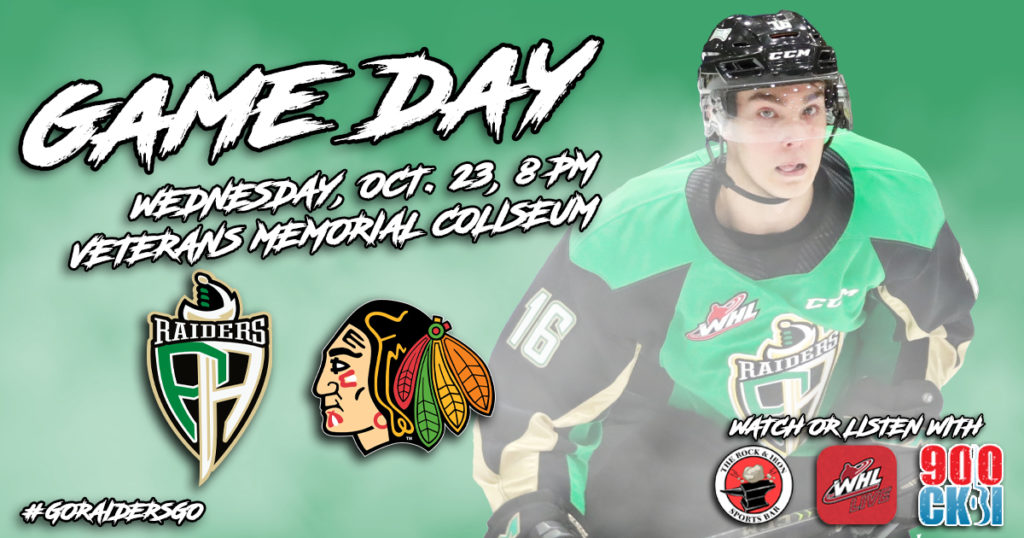 RAIDER REVIEW: The Raiders (7-1-3-0) travel to Portland tonight to face off against the Winterhawks (6-3-0-1) at the Veterans Memorial Coliseum. Last night against Seattle, the Raiders fell 3-1 to the Thunderbirds at the accesso ShoWare Center. Brayden Watts tallied the Raiders’ lone goal on the evening. Boston Bilous made 31 saves for the Raiders and was named the game’s third star.

LAST TEAM STANDING: Tuesday night’s loss to the Seattle Thunderbirds was the Raiders’ first loss in regulation this season. The Raiders were the last team in the Canadian Hockey League to suffer a regulation loss this season.

THREE STRAIGHT: With the primary assist on Brayden Watts’ goal on Tuesday, Ozzy Wiesblatt extended his point streak to three games. Over that span, the 2020 NHL Draft eligible prospect has a goal and three assists. The Calgary, AB product has been held off the scoresheet just twice in 11 games this season.

BUSY BOSTON: Tuesday night was just the second time the Raiders have surrendered more than 30 shots in a game this season. The 34 total shots on goal matches the season high allowed on Oct. 11 against the Lethbridge Hurricanes.

DOUBLE DIGITS: Brayden Watts’ goal on Tuesday night was his first on the power play with his new club. It was the overager’s 10th career goal with the man advantage. His career high for power-play goals in a season is four. Since being acquired by the Raiders, Watts has five goals and six assists in nine games.

WEARING ‘A’ LETTER: Prospect defenceman Graydon Gotaas was named to the leadership group for Team Alberta at the 2019 WHL Cup, which begins today in Calgary. Gotaas and Alberta open the WHL Cup against Bryce Warkentine and Team Manitoba.

NEXT UP: The Raiders wrap up their US Division road trip this weekend with back-to-back games against the Tri-City Americans and the Spokane Chiefs. Both games begin at 8:05 p.m. The next Raiders’ home game is on Friday, November 1 against the Regina Pats. Puck drop is 7 p.m. Tickets are available at the Raiders Office and online here.