Raiders Fall To Thunderbirds In Seattle 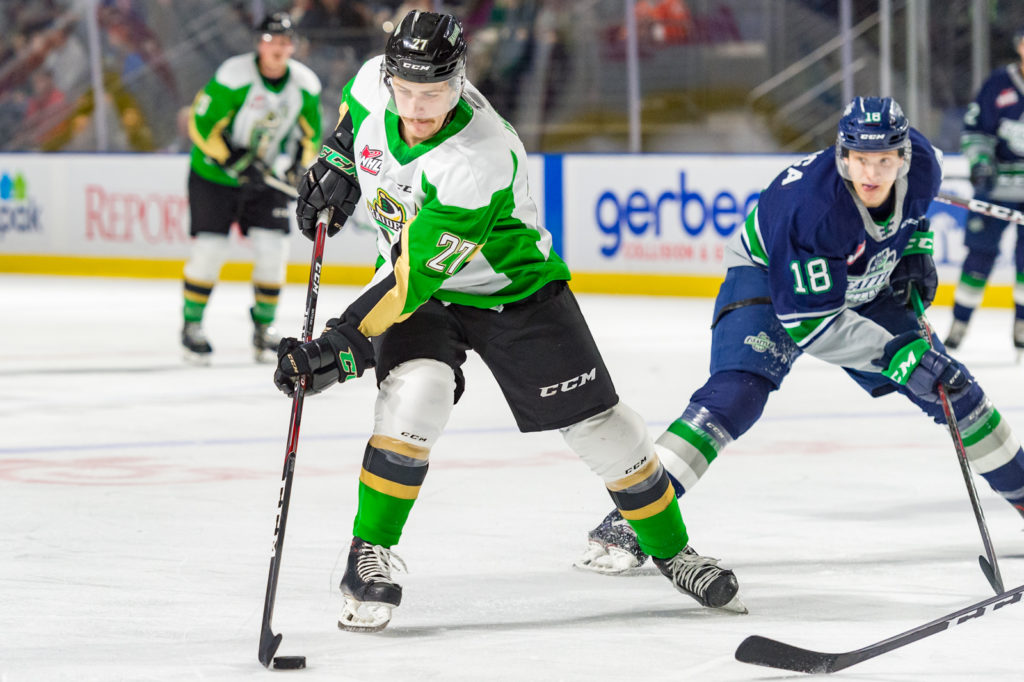 Kent, WA – The Prince Albert Raiders (7-1-3-0) lost their first game in regulation this season, falling 3-1 to the Seattle Thunderbirds (3-4-2-1) at the accesso ShoWare Center on Tuesday night.

The Raiders were the last team the in the Canadian Hockey League to suffer a loss in regulation.

Brayden Watts was the lone goal scorer for the Raiders on the evening, with Ozzy Wiesblatt and Kaiden Guhle picking up assists on the play.

Seattle used special teams to its advantage to open the scoring. With two Raiders in the penalty box, Matthew Wedman set up Simon Kubicek in the slot. Kubicek blasted a one-timer past Boston Bilous at the 8:31 mark of the first.

It was the only goal of the opening period. The Raiders had two chances with the man advantage, but weren’t able to generate a shot on goal.

In the second, the Raiders found themselves down two players again. Just after both penalties were killed, Kai Uchacz drove the net and his attempt was stopped by Bilous. However, Lucas Ciona was at the side of the goal and buried the rebound for his first career WHL goal.

The Raiders pushed for a goal in the third and were rewarded late in the period with a power play. On the man advantage, Watts found Wiesblatt across the width of the ice as they entered the zone. Wiesblatt returned the feed cross-ice to the overage forward and Watts’ quick-release shot beat Roddy Ross to make it a 2-1 game.

SCORES! @brayden_watts29 finishes a cross-ice pass on the power play!

As the Raiders continued to push for the equalizer, the Thunderbirds were able to trap the puck in the Raiders’ end. During that time, the Raiders were penalized again with 1:41 left. The Raiders still managed to pull Bilous for the extra attacker during the time, but were unable to get another puck past Ross. Andrej Kukuca sealed the game with an empty-net goal with nine seconds to play.

Bilous stopped 31 of 33 shots fired his way on the night. Ross made 24 saves for the Thunderbirds.

The road trip continues tomorrow night in Portland as the Raiders face off with the Winterhawks (6-3-0-1) at the Veterans Memorial Coliseum. Game time is 7 p.m. Head to The Rock And Iron Sports Bar to watch the game, or listen on 900 CKBI.

news
Raiders Announce "This Girl Can" Night
22 hours ago