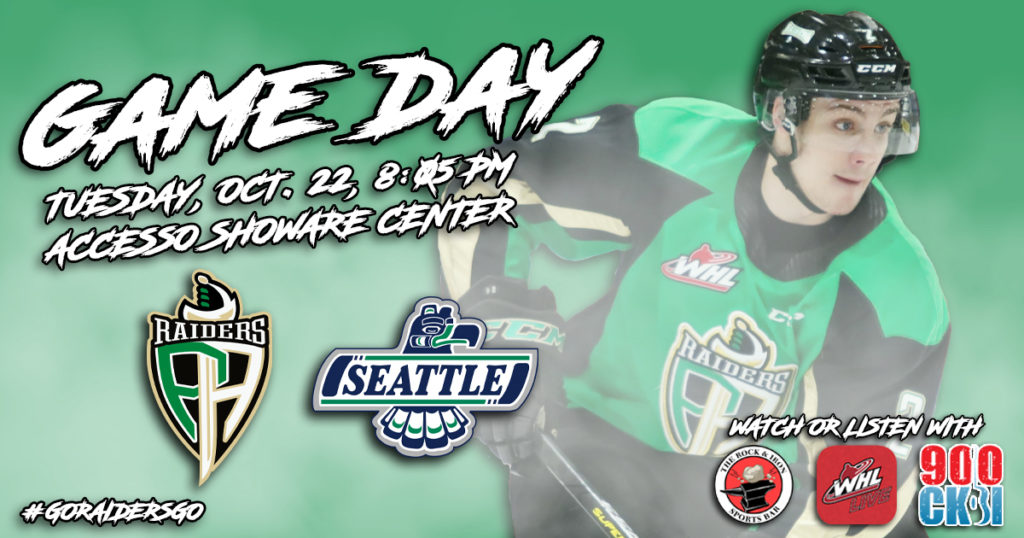 RAIDER REVIEW: The Raiders (7-0-3-0) head to Seattle tonight to take on the Thunderbirds (2-4-2-1) at the Accesso ShoWare Center. On Saturday, the Raiders opened their five-game US road trip with a 2-1 overtime loss to the Silvertips in Everett. Ozzy Wiesblatt scored the Raiders’ only goal of the evening. Michal Gut netted the overtime winner for Everett. Boston Bilous stopped 24 shots in the loss.

MAKE IT FIVE: With his assist on Saturday night against the Silvertips, Ilya Usau extended his current point streak to five games, which is tied for the fifth-longest active streak in the WHL. Usau is tied for second in rookie goal scoring and fifth in points by a first-year player.

POINT STREAK SNAPPED: Defenceman Kaiden Guhle saw his four-game point streak end on Saturday night in Everett. The 2020 NHL Draft eligible player picked up two goals and five assists over his point streak. On the season, the Sherwood Park, AB product has two goals and six assists while playing in all 10 games.

SCORING LATE: Ozzy Wiesblatt’s goal with 13.9 seconds to play on Saturday was the first Raiders goal scored to tie the game with an empty net since March 2, 2018 when Jordy Stallard scored with 1:06 left against the Swift Current Broncos. The Raiders went on to win the game 5-4 in a shootout.

SEEING RED: Nolan Allan will be suiting up for Canada Red at the 2019 World Under-17 Hockey Challenge, Hockey Canada announced on Monday. Allan and his team open the tournament on Nov.  2 in Swift Current against Russia.

NEXT UP: The Raiders head to Portland to battle the Winterhawks (6-3-0-1) at the Veterans Memorial Coliseum tomorrow night. Puck drop is 8 p.m. Catch the game on 900 CKBI with Trevor Redden, or head to The Rock And Iron Sports Bar to watch. The next Raiders’ home game is Friday, November 1 against the Regina Pats. Game time is 7 p.m. Tickets are available at the Raiders Office and online here.