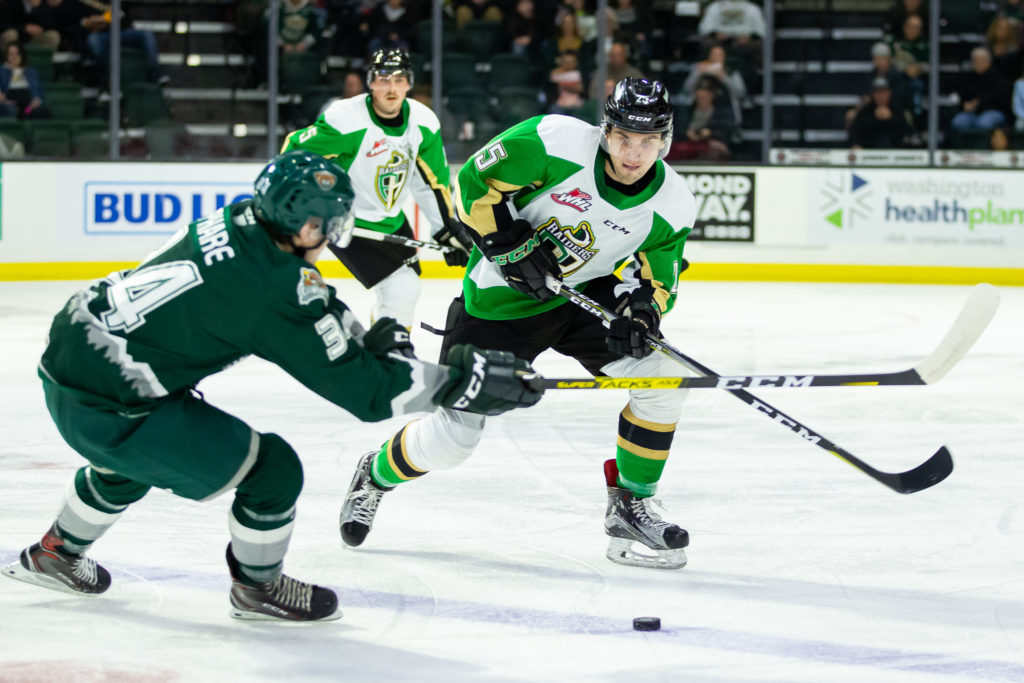 The Raiders picked up a point by heading to overtime to continue their streak of garnering at least a point in every contest this season.

The first period ended with no scoring by either team. Boston Bilous and Silvertips goaltender Dustin Wolf both turned aside seven shots in the opening 20 minutes. The Raiders’ best chance of the opening period came when Spencer Moe was sprung on a partial breakaway, but the Calgary product was unable to slide his puck through Wolf’s five-hole.

In the second, the Raiders had three chances around the crease with Aliaksei Protas and Ozzy Wiesblatt whacking away at the puck, but were unable to beat Wolf.

At the other end, Bryce Kindopp forced a turnover at the blueline and took the puck in on a shorthanded breakaway. Kaiden Guhle was able to get back and harassed Kindopp enough to get alter his shot.

The Silvertips took the lead 3:45 into the third period. Wyatt Wylie’s shot from the point was stopped by Bilous, but the rebound ricocheted off a Raiders’ defenceman in front of the goal. The puck found the stick of Gage Goncalves and the Mission, BC product banged home the rebound for his fifth of the year.

Late in the third, the Raiders almost tied it. Guhle cut through the offensive zone and got a puck on goal that was stopped. Brayden Watts was at the side of the goal and his rebound attempt was kept out of the net by Wolf.

With just about a minute to play, Wiesblatt had another great chance to break the shutout. Protas made a pass into the slot and Wiesblatt corralled the puck at the top of the crease. He put a shot a goal, but Wolf knocked it away with his glove.

Wiesblatt finally converted with 13.9 seconds remaining. Protas hit the Calgary product with another cross-ice pass and he one-timed it past a sprawling Wolf for his third of the season. Ilya Usau picked up the secondary assist on the play, extending his point streak to five games.

In overtime, Gianni Fairbrother carried the puck into the Raiders’ end and hit Gut with a pass between the faceoff circles. Gut’s wrister beat Bilous to give the Silvertips the extra point.

The Raiders’ road trip continues Tuesday night when they take on the Seattle Thunderbirds at the Accesso ShoWare Center. Game time is 8:05 p.m.