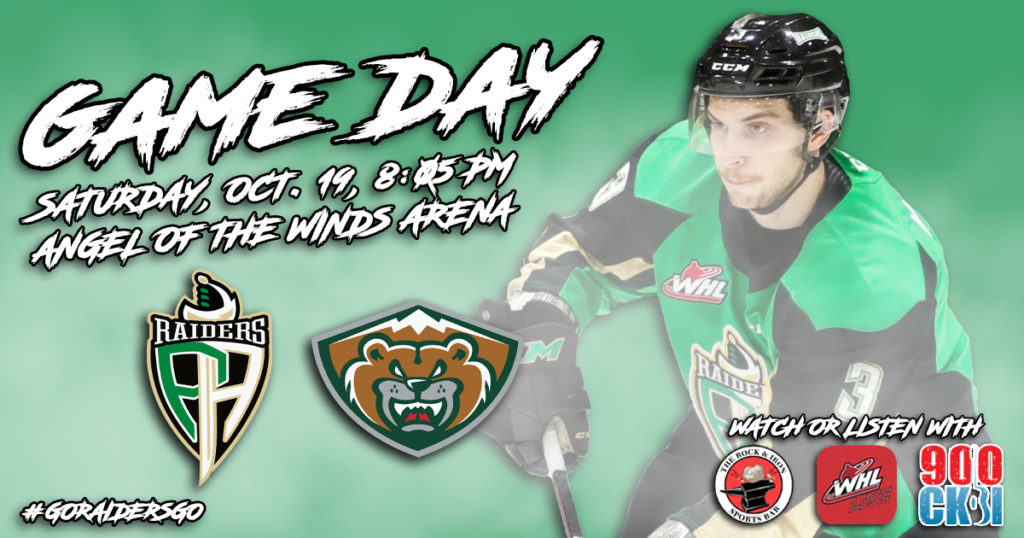 RAIDER REVIEW: The Raiders (7-0-2-0) start their US Division road trip tonight in Everett against the Silvertips. Last weekend, the Raiders ended their six-game homestand with an 8-4 win over the Moose Jaw Warriors. Ilya Usau led the way with two goals and two assists. Aliaksei Protas also had two goals and an assist, while Spencer Moe chipped in with three assists.

OH CAPTAIN, MY CAPTAIN: Overage defenceman Zack Hayes was named the 43rd captain in Raiders’ history on Tuesday afternoon. He is joined in the leadership group by defenceman Jeremy Masella and forwards Aliaksei Protas and Brayden Watts, who will all serve as alternate captains.

WORLD STAGE: Fresh off scoring his first WHL goal on Saturday night against the Warriors, Nolan Allan was named to Canada’s roster for the 2019 World Under-17 Hockey Challenge. The tournament will be played in Medicine Hat, AB and Swift Current, SK beginning on Nov. 2.

MAKE IT FOUR: Rookie Ilya Usau had the best offensive night of his young WHL career on Saturday with a four-point effort. It was the first multi-goal and multi-assist game so far in the WHL. Usau had a great offensive homestand, scoring all nine of his points (four goals, five assists) over the last six games. He is also on a four-game point streak.

HELPING HAND: Spencer Moe recorded the first three-assist performance of his WHL career on Saturday night. It was also the third three-point effort of the Calgary, AB product’s career. Moe has picked up five points in the past two games and has reached the 50-assist plateau in his WHL career.

EIGHT IS ENOUGH: The Raiders had their best offensive output on Saturday with an eight-goal effort.  Last season, the Raiders scored eight goals in a game four times.

NEXT UP: The Raiders’ road trip continues on Tuesday night in Seattle against the Thunderbirds and Wednesday night in Portland against the Winterhawks. The next Raiders’ home game is on Friday, November 1 when the Regina Pats visit the Art Hauser Centre. Puck drop is 7 p.m. Tickets are available at the Raiders Office and online here.