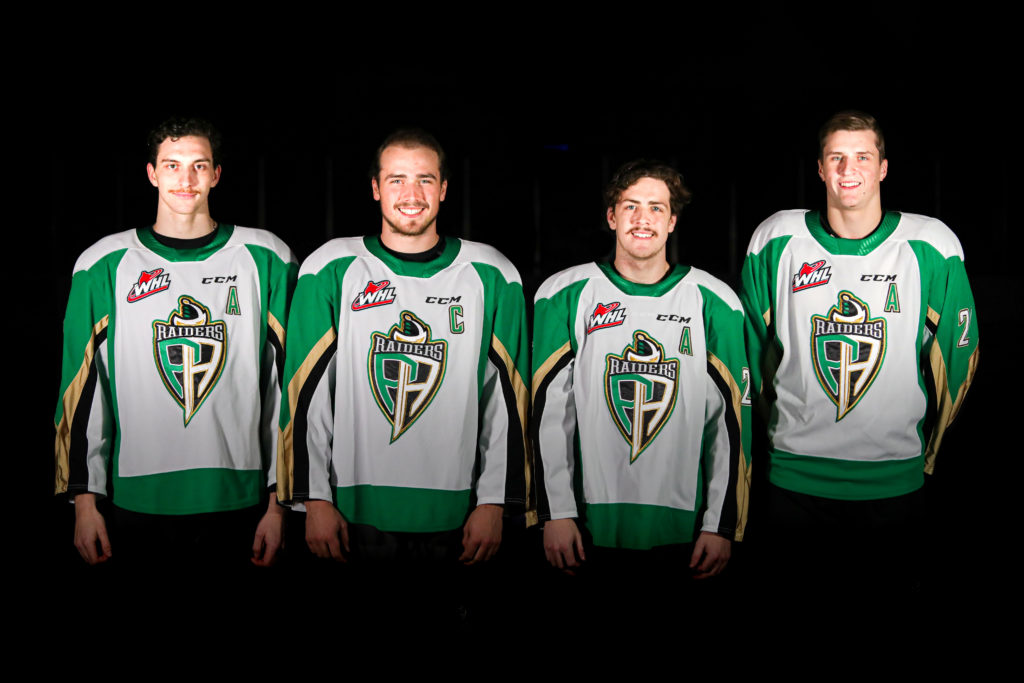 Prince Albert, SK – The Prince Albert Raiders are proud to announce their leadership group for the 2019-20 season.

Defenceman Zack Hayes has been named the 43rd captain in Raiders franchise history.

Alongside Hayes, Jeremy Masella, Aliaksei Protas, and Brayden Watts will serve as alternate captains for the season.

“He’s been through thick and thin with us,” said Raiders Head Coach Marc Habscheid on Hayes. “He knows exactly what it’s all about. He knows the organization and the coaching staff and the city as well as anybody. He’s deservedly the captain.”

“It’s something that I’ve dreamed of, and it came true,” Hayes said.

Hayes, a Calgary, AB product, was selected by the Raiders in the ninth round of the 2014 WHL Bantam Draft. Including this season, he has played in 217 career games as a member of the Raiders in the regular season, with 30 additional postseason contests. Hayes was also named the Century 21 Lionel Diehl Memorial Hardest Working Player of the Year for the 2018-19 campaign.

The overage blueliner recently returned from NHL and AHL training camps with the Anaheim Ducks and San Diego Gulls. In five games this season, Hayes has a two goals and an assist.

Hayes also served as an alternate captain last season and for the first five games of the 2019-20 season.

Masella was also an alternate for the first five games of the 2019-20 season and earned the letter on his sweater for the rest of the season.

The Phoenix, AZ product was acquired by the Raiders from the Victoria Royals at the 2018 WHL Trade Deadline. Since joining the team, Masella has played in 110 games with four goals and 21 assists. Last season he played in all 68 games, scoring two goals and adding 12 assists. He also dressed in all 23 games during the 2019 WHL Playoffs, adding a goal and five assists. He was also named the Raiders’ 2018-19 Parkland Ambulance Humanitarian of the Year.

Through nine games this year, Masella has scored once and assisted on three others.

Protas was picked 26th overall in the 2018 CHL Import Draft out of Vitebsk, Belarus. In his first WHL campaign, he had 11 goals and 29 assists. His production increased during the Raiders’ run to the 2019 Rogers WHL Championship Series, scoring 12 goals and adding 10 assists.

His performance through the regular season and WHL Playoffs was noticed and Protas was drafted in the third round of the 2019 NHL Entry Draft by the Washington Capitals.

Protas leads the Raiders in scoring with six goals and eight assists through nine games this season.

Watts, from Bakersfield, CA, was acquired by the Raiders in Sept. 24 from the Vancouver Giants. Last season, Watts was part of a rotating group of players that served as alternate captains with the Giants.

Since joining the Raiders, the overage forward has fit in well offensively with four goals and six assists in seven games.

Watts is a veteran of 260 regular season games in the WHL and another 34 in the postseason. He was a third-round pick of the Moose Jaw Warriors in the 2014 WHL Bantam Draft.

“I think if you look at them all, they’re all winners,” Habscheid said of the alternate captains. “The only one that didn’t win a championship was Watts and he came down to Game 7 in overtime and was a leader on that team.”